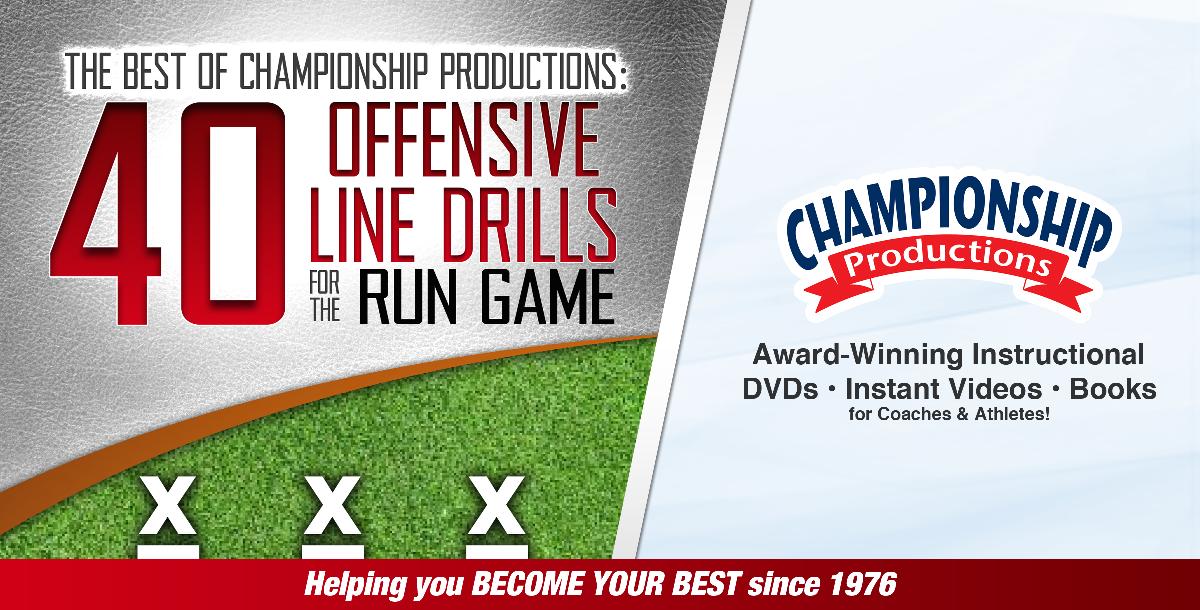 Get the best offensive line drills and techniques for the run game, all packed into one star-studded video.

Championship Productions has compiled all the best run game concepts for offensive linemen into one video delivering the ultimate tool kit for your offensive line. Whether your linemen are in the development phase or just need a refresher, this collection of high level drills will provide quality instruction and reps.

Every lineman needs great first step technique to create explosion and power. The coaches in this video teach those initial steps and share drills for executing them properly and getting to the right spot off the snap. After development of the first step, you'll see drills that focus on executing different steps from various stances.You'll also learn how to teach athletes to play through double teams, down blocks, reach blocks, pulls, skip pulls and short pulls. By conquering defensive stunts, your linemen will open up more holes for your backs to get up the field.

If you're looking to fine-tune your line this season, look no further than this compilation of the best offensive line skills and drills ever assembled. Whether you're coaching youth players or even a collegiate team, you'll find something in this video to help your run blocking.

Brian Hughes was selected by the American Football Coaches Association (AFCA) as its 2004 Division II Assistant Coach of the Year. Hughes also functioned as the Long Island Pioneers' offensive coordinator and as the architect of the team's offense, he compiled a 64-13 record, won three conference titles and reached the NCAA Division II playoffs twice.

Dan Roushar is an NFL coach, currently the Tight Ends coach for the New Orleans Saints. He was previously the Running Backs Coach for the Saints and, before that, the offensive coordinator at Michigan State. Roushar has served as an assistant coach with several teams, beginning in 1986 as the offensive backfield coach with Butler.

Ed Thomas coached 37 years of Aplington-Parkersburg Falcon football and won two state titles and a total of 292 games. He is credited with having coached four NFL players, which is the most per capita of any high school in the nation.

Some great, some very out dated and not useful.

You just booked "40 Offensive Line Drills for the Run Game"