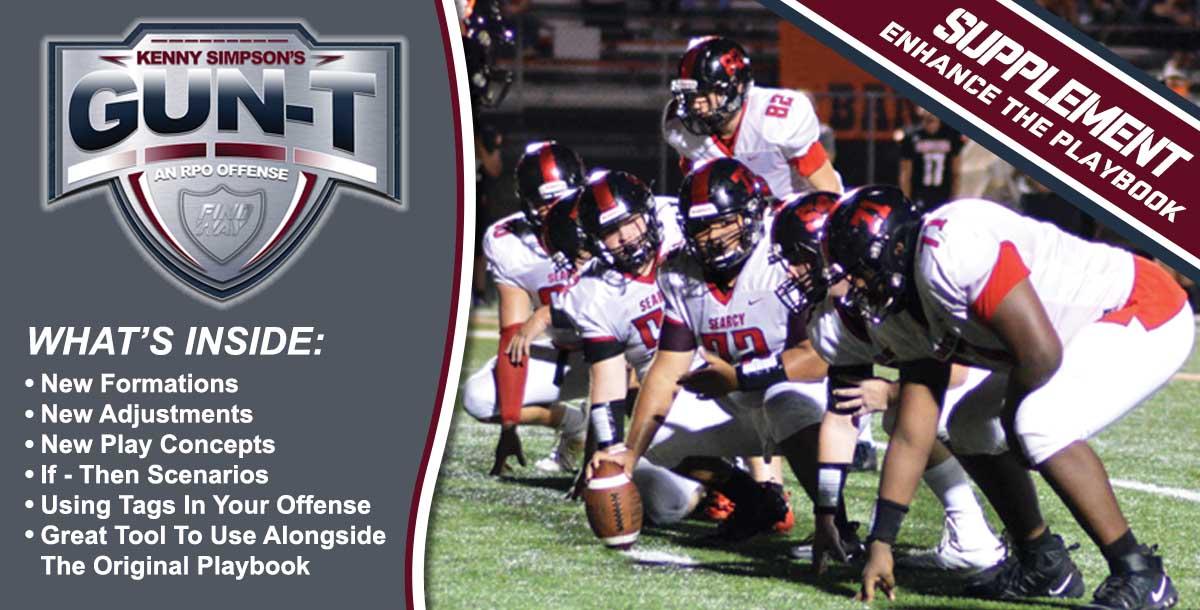 THIS IS NOT DOWNLOADABLE - IT IS VIEW ONLY - IF YOU'D LIKE A HARD COPY GO TO FBCOACHSIMPSON.COM TO ORDER ONE

This playbook provides the following:

-Choosing Personnel in the Gun T-Quick Side Buck sweep

-If - Then Section: Answers for any defense

"As a first year head coach and a first time offensive play caller, I don't know where we would have been without the material that coach Simpson has available. We went from 4-6 to 7-4, to the third round of the postseason, and earned the second best record in school history. The program hadn't been to, nor won a playoff game since 2015. Thank you coach Simpson."-Mike Granato, Head Football Coach, West Orange High School, Florida

“Coach Kenny Simpson's book is top notch. We have been able to integrate some things into our offense as they relate to what we do already. We saw an instant upgrade in our run game and our players & staff were more confident that we could run the ball. Thank you for all you do for coaches.” -Anthony Johns, Offensive Coordinator, Valley Lutheran HS in Phoenix AZ.

Coach Kenny Simpson is the head coach at Searcy Arkansas.

Before Searcy, he was the Head Football Coach at Southside Charter. Taking over a program that had won eight games in five seasons and had been on a 20+ game losing streak, Simpson has led Southside to the playoffs for four-consecutive seasons and won two conference titles in the past three seasons. For his efforts, he was named 4A-2 Conference Coach of the Year (2017), named to the as a finalist for Hooten's Coach of the Year (2017) and has been the All-Star Nominee for the 4A-2 (2016 and 2019). He was also selected to coach in the 1st FCA Texas-Arkansas All-Star Showdown (2020). Coach Simpson wrote his first book in 2019. Another book is already in the works and will be available in 2020. Find A Way: What I Wish I'd Known When I Became A Head Football Coach, has already been a best seller on Amazon in several categories. Simpson has also raised over $1.5 million for Southside and has overseen several major facility projects including: New Field Turf, Expansion to Fieldhouse, Expansion to the school's home bleachers, and the addition of a press box and a new video-board.

Prior to coming to Southside, Simpson took over as Head Coach at Alabama Christian Academy in Montgomery, Alabama. During his tenure there, Simpson took over a team that had been 4-18 and led them to their first home playoff game in over 20-years. For his efforts he was named Montgomery Advertiser's All-Metro Coach of the Year as well as being voted 4A Region 2 Coach of the Year (2010). Simpson also served as the head track coach at ACA and led the girl's and boy's teams to multiple top 10 finishes in 4A. Simpson began his coaching career at Madison Academy, in Huntsville, Alabama. He served as a junior high basketball and football coach, before working into a varsity coaching role in football. He graduated from Harding University in 2003. He is married to Jamey and has three children: Avery, Braden and Bennett. The couple was married in 2001 after meeting at Harding University.

Don't like the stigma of running an "old fashioned offense"? Coach Simpson put together a great resource for hardcore wing-t and spread coaches looking to enhance their run game. It has everything from traditional wing-t runs plus a zone run with RPO's.