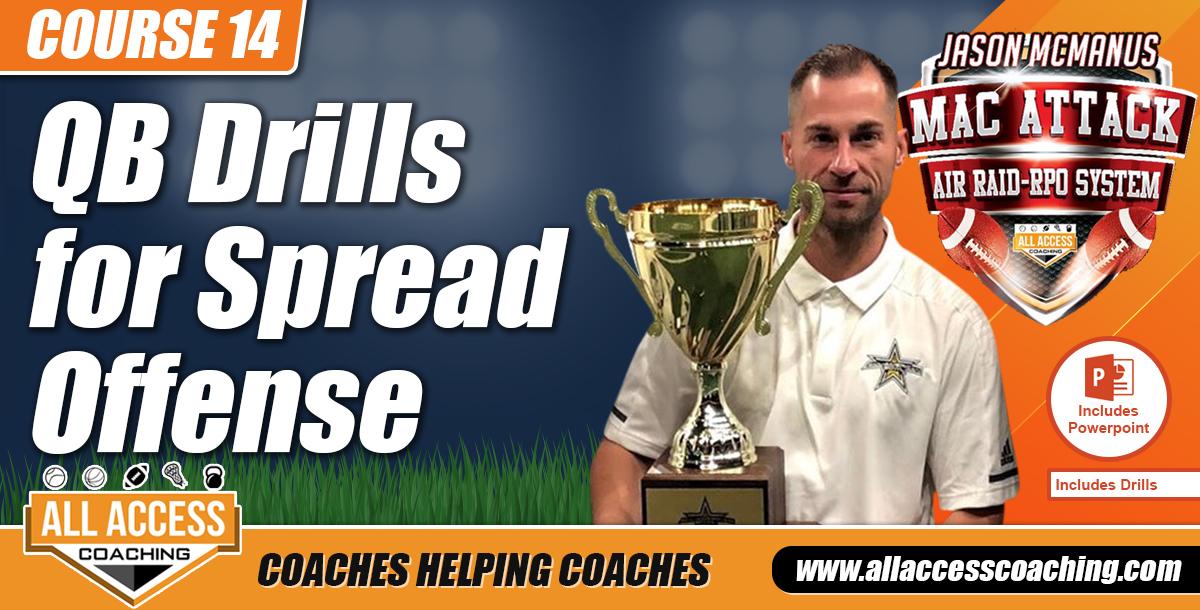 Tired of seeing drills off a Powerpoint?  Isn't it hard to visualize the steps and arm movements?

How does the drill translate to the actual game?

Coach Jason McManus has the answer for you!

This entire 48 minute film is nothing but practice and game video of QBs at 4-time state champ South Point high school in South Carolina.

No theoretical whiteboard stuff.  McManus takes you straight to the field so you can see him teaching and correcting his QBs in practice!

--> Proper Stance out of shotgun and the MacAttack NOOSE drill to teach how to handle bad snaps.

--> Proper Footwork out of the Gun on Fast Screen, Bubble, RPO.  Very simple QB footwork for TUNNEL SCREEN up the middle

Coach McManus takes you through the QB reads for: Stick/Bubble; Hitch into the Bounday; Slant/Corner with FB Scat route out of backfield; 4 Verts

22-slide Drawing of 21 drills to train the QB in the Spread Offense.

Everything is on the field. You watch the QB, WR, and Centers at practice with Coach McManus correcting them. Amazing how fast they go in practice.

Really enjoy Coach McManus' teaching style and simplicity and practical application of concepts. Im looking forward to learning more about his strategies for player development within a system.

I think out of all the courses I have, this one is by far my favorite and exactly what I use with my team. So effective and I'm sure I probably run screens way more than I should because of the confidence I have in our screen game. Thanx Coach Mac.

Jason McManus does a great job of explaining his drills and how they relate to the game to help develop your QB. Couldn't have asked for a better drill tape.

Hands down one of the most thorough systems I have ever seen!!!!