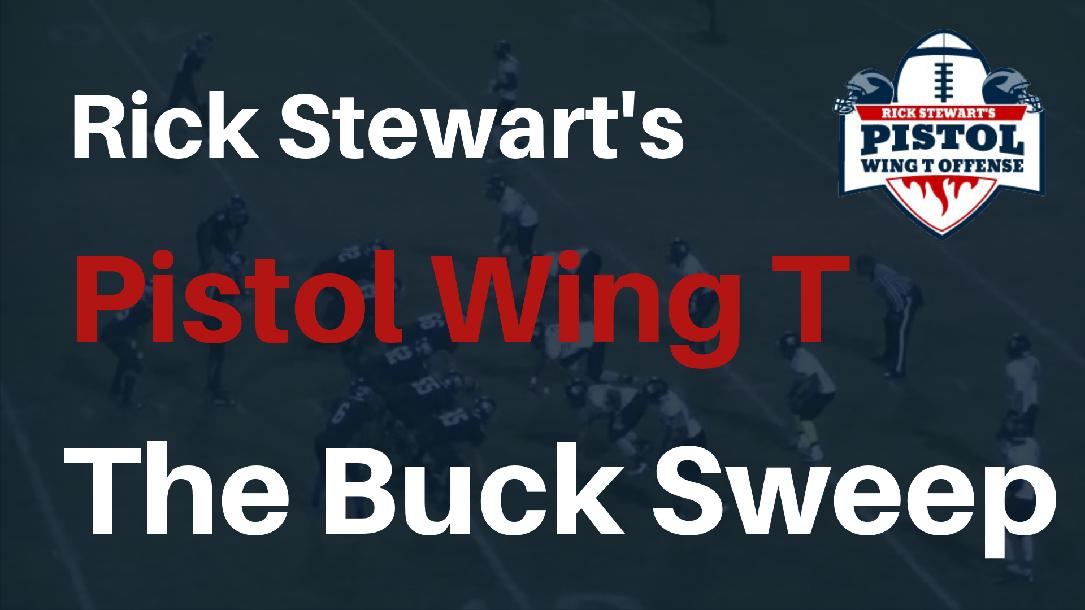 If you need an offensive system that is both fun and can get you proven results, the Pistol Wing T is your answer. This course is OVER AN HOUR long. 20 minutes of game film and another 10 minutes of Stewart on the field with players teaching the footwork and drills. This is not just a powerpoint or a coach talking on the whiteboard. Rick Stewart covers every single detail of the Buck Sweep.

In this course you will learn:

- INTRICATE BLOCKING DETAILS TO RUN BUCK SWEEP
- Blocking assignments vs 4-3, 3-4, 4-4, and 3-3 defense.
- Explains "why" it is better to put your lineman back off the line of scrimmage.
- Explains the Gap-Down-Backer run blocking rule. Most coaches think they know, but really don't understand it.
- Best aiming points for the down blocks. What to do versus penetrators and D-Linemen who "spin" out of their blocks
- How the Train Track principle takes care of defensive players moving after the snap and also takes care of any blitzes.
- Detailed explanation and game film of the paths and steps the pulling guards take.
- How to handle double A-gap blitzes and how the backside Guard picks up playside blitzing.

- How to get your backs run to fake and run hard
- Step by step of practice and game film of how the footwork changes with your QB in the Pistol formation.
- Why the wing blocking the Defensive End is actually an easy block.

Defensive Coaches: Find out what’s going on inside the mind of a wing T or Pistol Wing T coach as well as which defense is the most difficult to handle with the buck sweep and which blitz causes it the most trouble.

Coach Stewart has specialized in turning around losing programs.  As a first year varsity assistant at McFarland, he helped them break a 19 game losing streak going 8-2 and making the playoffs for the 4th time in 75 year history of the school.  He left McFarland to coach DBs & WRs at North-Bakersfield and then become OC at Delano High before returning to McFarland as head coach in 2003.  McFarland went 1-19 during his absence, but he got them back into the playoffs in his 2nd year as the head coach.  McFarland had no weight room, 3 coaching stipends, 600 students in the school, and every student was in the free lunch program.

Coach moved on to Corcoran, with 900 students and a football weight training class.  They were on a 27-game losing streak prior to his arrival but were undefeated league champions in Year 2.

The pinnacle of his career was Porterville, a D-3 school with 2,000 students in a rural, agricultural setting.  They had never won a playoff game in 100 years and had only won 8 games in the 5 years before his arrival.  He started a 501(c) booster club from scratch, formed 3 youth feeder teams by fundraising $25,000, and completely re-built the dilapidated weight room with $40,000.

After going 2-8 in his first year (losing a game in OT and another by 4 points), Porterville won 36 games in four years, won 6 playoff games, a league championship, and played for back-to-back section championships.

During his 10 year career, Stewart has re-built all of these schools despite NEVER COACHING A SCHOLARSHIP PLAYER !!!  Also, he has only lost 2 players to grades in his entire career as his Academic Gameplan is a solid, year-round program.  But Stewart’s strength is Team Building…at all 4 levels: Players, Coaches, Campus, & Community.

Coach Stewart served 4 years in the USMC and has a bachelors in biology and minors in chemistry and physics.  He is credentialed to teach all 3 sciences, as well as Physcial Education.  He has taught for 14 years the subjects Physics (AP and CP), Chemistry (AP and CP), Earth Science, Life Science, Biology, Anatomy, and Integrated Science.  He has taught Advanced Strength and Conditioning that past 5 years.

We bought Coach Stewart's entire Pistol Wing T system after a 3-7 season and saw immediate results. We went 6-4 and made the playoffs the next year. What's great is that Coach Stewart will always call or email you back if you buy his course. I can't even count how many emails he has answered for us and we have talked on the phone several times. We are bringing him to our school this summer to spend two days with our kids and coaching staff. This Buck Sweep course on CoachTube is 100 times better than the DVDs being sold because those videos are so old. I can see in this course all the updates Coach has made, plus he only spends 10 minutes explaining Buck Sweep on the DVD, where this video is over an hour long. The 12 games clips at the end are golden.

I bought the Pistol Wing T videos several years ago and thought they were very well done. But after watching this course, I will never buy another DVD. Stewart has made so many changes from the original DVDs and spends an hour on this play but only 10 minutes on the DVD. Plus the powerpoint is ready to download immediately, although Stewart is real good about answering emails. He sent me the powerpoint to my old DVD right away. He mentioned several times that he has more courses coming out. With this detail I will definitely buy them.

Being that this is East Union’s third year in the Pistol Wing T, this Buck Sweep webinar has given a lot of insight into the reasoning behind this family of plays. It is the little, almost minute, bits of information that take the GO family from a lesser used series to the most important one. The format for the Coach Tube has made the learning process much easier, as well as giving us the necessary Q&A feel that a coaching clinic offers. Although EU has had two full years with the Pistol Wing T, this interactive webinar will surely help our team. Recommend 10/10 times to Coaches who want to adopt this offense, become more knowledgeable about the Pistol Wing T or just want a refresher course on the GO (Buck Sweep) Family.

It's great to see a version of the wing-t so well coached. This course is a great tool. You can show your players, but your coaches will benefit more than anyone. Teaching tips and techniques are broken down very specifically. The bird dog practice drill is a great way to show where everyone should be and to work on timing. It's also great to see a coach break down film and show the bad and the good. So many clinic coaches have D-1 players all over the field, and really anything they wanted to run would be successful. Coach Stewart shows how you can win with less than optimal athletes. This is a great tool to sell a coaching staff on the beauty of the wing-t.

A good coach knows that it's not what you do, but how you do it. Coach Stewart proves this to be true again. The detail in this video for the buck sweep is incredible. He breaks it down so anyone could understand. The course will help assistant coaches teach their players how to execute the buck sweep the right way. It provides buzz words, blitz situations, how to attack different defenses, plus much more. After having Coach Stewart install the offense last summer, he still remains a resource for our staff if we have any questions. If you are new to Pistol Wing T, there's no one else I would recommend besides Coach Stewart.

This is a MUST HAVE course for any coach, new or experienced, who wants to learn about the Buck Sweep, and Pistol Wing-T taught by one of the best coaches in the country. There's about an hour and a half of awesome material. But it is broken down so well that I took about 6 days to watch the entire thing, because every second is packed with information, and I didn't want to miss anything. You'll find yourself watching, rewinding and watching again because the material is that good! What brought me to the Pistol Wing-T and Rick Stewart in particular is he knows how to build a program, and install an offense (and his 4-2-5 defense!) for schools with average talent. We do not have game breaking talent, but we have a program that believes in this system. The best part of this program is that Rick Stewart makes himself available to help you! You've got to check out this course and any other courses by Rick Stewart.

We are a spread team and was looking to do something different to try and gain an edge. This program was amazing, Coach Stewart explained everything in simple football terms (you don’t need to be coaching that long to understand). Our team grasped this play very quickly and helped us score more points all season. You won’t be disappointed

I thought this course was excellent! Coach Stewart does a fantastic job of explaining how he keeps the wing t principals the same while also making small changes. He also gives great feed back on blitz pick up as well as little things to look for within the different defenses.

Coach Stewart has been a tremendous help to our football program over the last 6 years. Since we went to the Pistol Wing T we have seen a tremendous improvement in the offensive output program wide.

POWERFUL WING T RUN GAME MARRIED TO THE EXPLOSIVE SPREAD OFFENSE !! If you need an offensive system that is both fun and can get you proven results, the Pistol Wing T is your answer. This course is OVER AN HOUR long. 20 minutes of game film and another 10 minutes of Stewart on the field with players teaching the footwork and drills. This is not just a powerpoint or a coach talking on the whiteb...