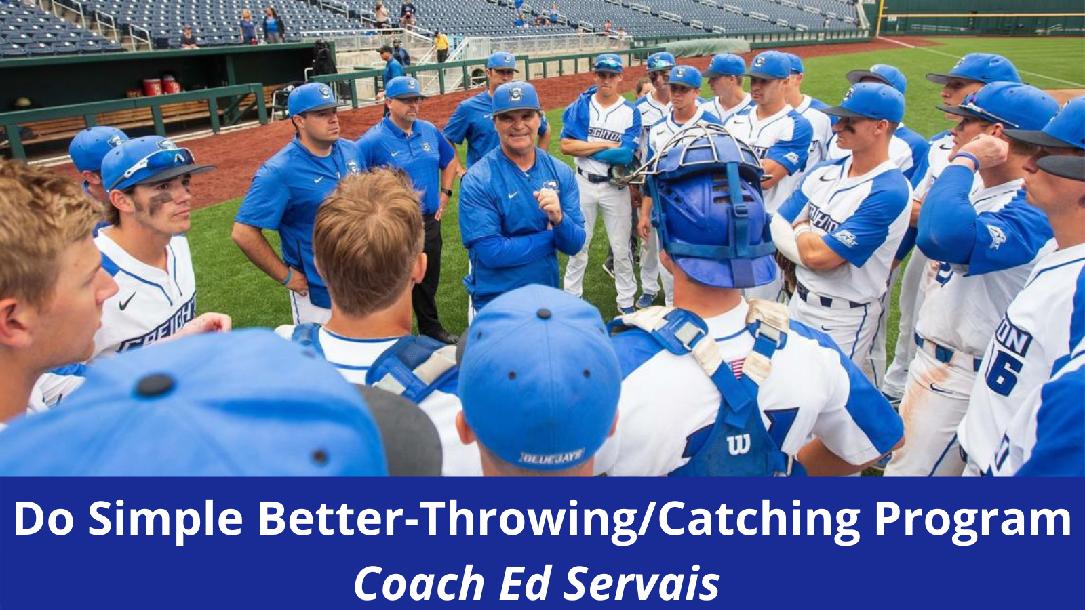 Throwing and catching is a staple of baseball, a fundamental which is needed to play the game. Such a simple thing can make a difference on the outcome of a game. “Do simple better” says Ed Servais. By simply taking the time to develop and enhance the basics, can your team elevate and outperform the opposition.

The practice field is the perfect place to implement fundamental drills that can improve the biomechanics of throwing and catching. Drills such as “two knees” are one of the best tools accessible to a coach. Players get on two knees about 20 feet away from their partner. Practice throwing and catching on each other, ultimately promoting good circular motion of the shoulder. Creating good throwing mechanics. Similar to the one knee down, which allows for better hip rotation.

In this course, Ed Servais breaks down his throwing and catching program. He shares some of his favorite drills and exercises he uses to improve and develop his young players. Everything you need to become a better thrower and catcher is right here.

Simply click the ‘Book This Course’ button at the top right of this page, place your order, and you’ll immediately be logged into the training with full access. Learn what it takes to take your throwing and catching to the next level.

Servais’ reputation for teaching was rewarded during  the summer of 2013, Servais served as one of three assistants for USA Baseball’s Collegiate National Team. Servais was responsible for team defense and was the first base coach. Servais helped Team USA post a 7-3 record, including a five-game sweep of the Cuban National Team.

Servais’ ability to prepare his squad to play beyond the college ranks led to 37 Bluejays being taken over the last 16 seasons in the MLB Draft. Six Creighton players were selected in the draft following the 2019 season, tying the six Bluejays taken from the 1991 team.

Catching: The Art of Receiving with Jerry Weinstein by CDC The Colorado Dugout Club
Views: 771
$9.95