One Knee Catching. Know Your Catcher Before You Decide with Johnston Hobbs 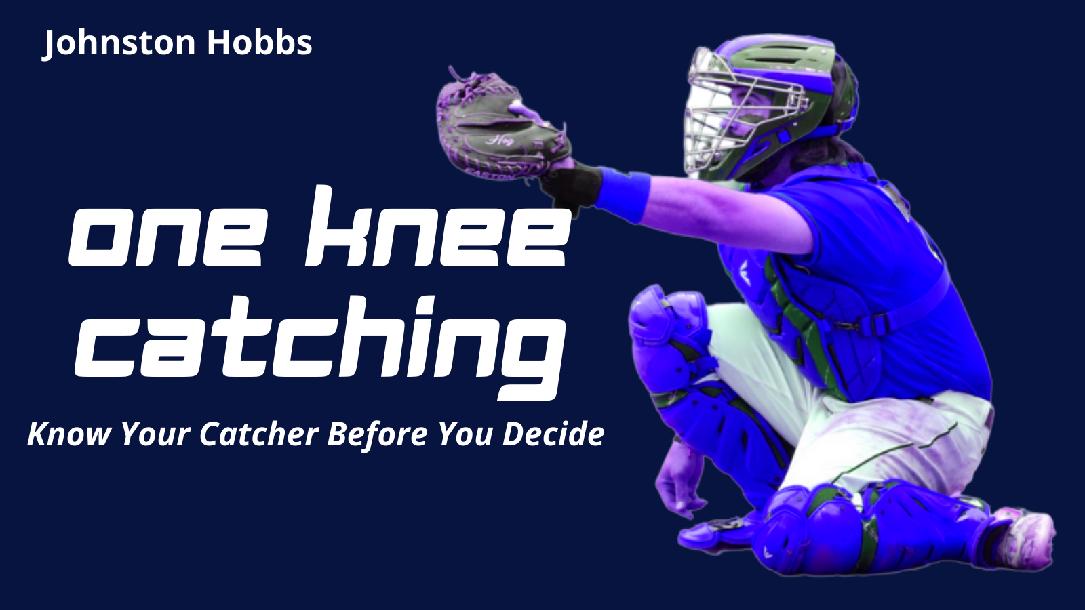 What is the big deal with having one knee down when catching? One knee catching vs traditional crouch is a common discussion amongst catchers. Both have their pros and their cons. However the play by play, is an attempt to present more pitches as strikes to the umpire. Knowingly, the right of left-eyed umpires plays a role in strike percentage.

There is no right or wrong, it is only a matter of preference. The one knee catcher is used to rest the body while assisting in framing, their overall comfort in position. Adjusting the glove and blocking come easier when in the one knee down catching stance. It also helps improve the catchers receiving on the bottom zone, resulting in a greater amount being called strikes. Looking at the big picture, we can see how a traditional secondary stance may be causing more runs to be scored on low pitches.

One knee catchers often get up from their position and throw down to the second base, quickly externally rotating their body and hips while simultaneously rotating the knee which can cause meniscus pain and compromise the mechanics of their shoulders. Traditional has a larger base of support whereas the one knee catches as close to 50% less.

Internal rotation problems with hip; trochanteric bursitis, tensor fascia latae syndrome, and putting knee in valgus. It can result in an MCL sprain/strain. There are big health issues with one knee catching than the traditional. Ultimately there is no stance that is better than the other but ultimately It depends on what your body likes most.

In this course, Johnston Hobbs talks about the difference between a one-knee catcher versus a traditional crouch catcher. He breaks down the pros and cons of both as well as the health implications that come with each stance. Everything you need to develop and form your catcher is right here.

Simply click the ‘Book This Course’ button at the top right of this page, place your order, and you’ll immediately be logged into the training with full access. Start developing chemistry with your catcher today!

Johnston Hobbs is currently coaching baseball in Apex, NC, at Apex Friendship High School. From 2011-2016, Johnston served as Assistant Coach in charge of Catchers at Flanagan HS in Pembroke Pines, FL. He has coached at University of Oregon's Prospects Camps, TCU, and Indiana University.

Hobbs served as Assistant Director of Baseball Operations in 2011 at one of the nation’s premiere residential sports camps, Camp Greylock, in Beckett, Mass. Johnston worked with many of the top Indiana HS and collegiate catchers and pitchers in Indianapolis at the Indiana Baseball Academy during the winter.

You just booked "One Knee Catching. Know Your Catcher Before You Decide with Johnston Hobbs"