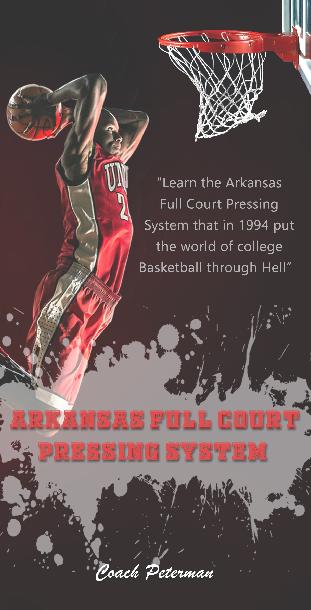 In 1994, Coach Nolan Richardson and the Arkansas Razorbacks put the world of college basketball through Hell. They would be on you for 40 Minutes, 94 Feet, constantly…. Most teams would say that is “40 Minutes of Hell”. It’s how they played basketball. They never got the elite basketball recruit at Arkansas. Anyone can play this style of defense if they sell their players on it. Oliver Miller wasn’t a big time recruit and he got drafted in the first round and played with the NBA Phoenix Suns.

You are going to have your team, scraping, running, shooting, and diving for loose balls. It’s the most natural way to play the game of basketball. You will get your teams to attack, attack, attack. It’s going to be Hell for the other team.

The drills, all the conditioning, and the running….. your team will be ready for the season. It’s a mental game and the reward is winning a championship at the end.

It’s a style of play that you can win with…

Disruptive Team defence that will IMPACT your opponent. by Coach Liam Flynn
Views: 3201
$14.99