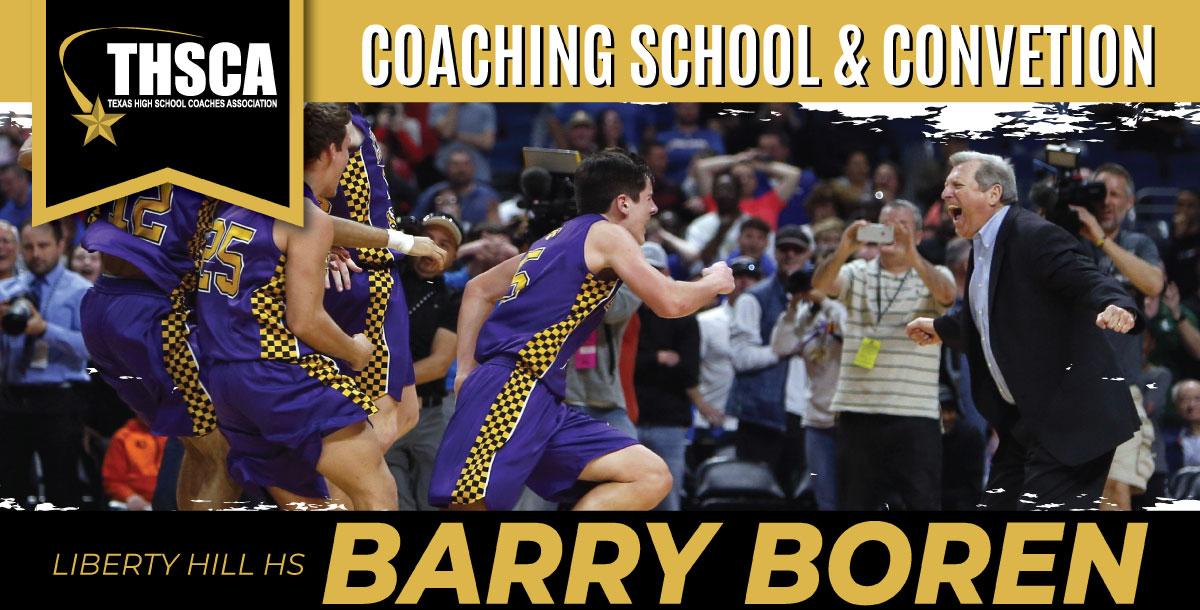 Coach Barry Boren discusses a variety of topics during his presentation at the 2019 THSCA Coaches Clinic.  Coach Boren reveals 5 numbers which have impacted his career and discusses how he has built his teams culture.  In addtion, Coach Boren also discusses his numbering system for offense, various alignments for baseline and sideline out of bounds situation, and discusses his press alignment and philosophy of pressing.

Barry Boren is the Head Boys’ Basketball Coach at Liberty Hill High School. He has just completed his
17 th year at the helm of the Runnin’ Panthers. It was his 40 th year as a teacher/coach (36 as a Head Coach.)

Coach Boren is a native of Ft. Worth, Texas where he graduated from Haltom High School and Texas
Wesleyan University with a B.A. in English and a Minor in Physical Education. He is married to his high
school sweetheart, Sue Ann, and is the proud father of three children and seven grandchildren.
The Boren family is one of teachers. His wife is a retired teacher. His oldest daughter, Shae, is a former
teacher (in LH) who now works in the church with her husband Jake. He is a former teacher/coach now in the
ministry. They have three children. Daughter number two, Brittany, is a former teacher who now does sales
from home. She is married to Nick who is a naval officer and flight instructor. They also have three children.
Then, there is son, Blake, who serves as the Assistant to the Head Coach. He, and his wife Kristina, both teach
at Liberty Hill High School. They have one child. There are literally students who have come through LH that
have been taught by five different Boren’s!

When Coach Boren is not coaching, he still loves having something to do with basketball. He routinely
can be found keeping the gym open for his players and former players. He also has a large, full day camp every
summer at LH. In addition, he has part-owned an overnight camp that was originally housed on the campus of
Texas A&M/Commerce (Texas Prep Basketball School) for 15 years. During the summer, he also tries to
follow the playing path of his upcoming players while on the AAU circuit.

When pressed on the topic of hobbies, Coach Boren says he likes to spend time with family. This
includes traveling or hosting get-togethers at the Boren home in Liberty Hill. Boren also likes to be out and
about when home and therefore enjoys jogging in the neighborhood, working in the yard, and lounging poolside
with the grandkids.

Coach Boren says the greatest thing about Liberty Hill is the kids and the parents. “We have kids who
don’t mind putting in the work, and we have parents who allow the coaches to do the work with them.”
Prior to coming to Liberty Hill, Coach Boren coached at Keller Fossil Ridge HS (3 years), Little
Cypress-Mauriceville HS (6 years), Terrell HS (6 years), Kaufman HS (3 years), FW Richland Jr. High (2
years), FW Monsignor Robert Nolan HS (1 year), FW Watauga Jr. High (1 year), Keller Middle School (1
year). Coach Boren has never been a basketball assistant. Even at the middle and junior high schools, he was
in charge of the entire program for that school.