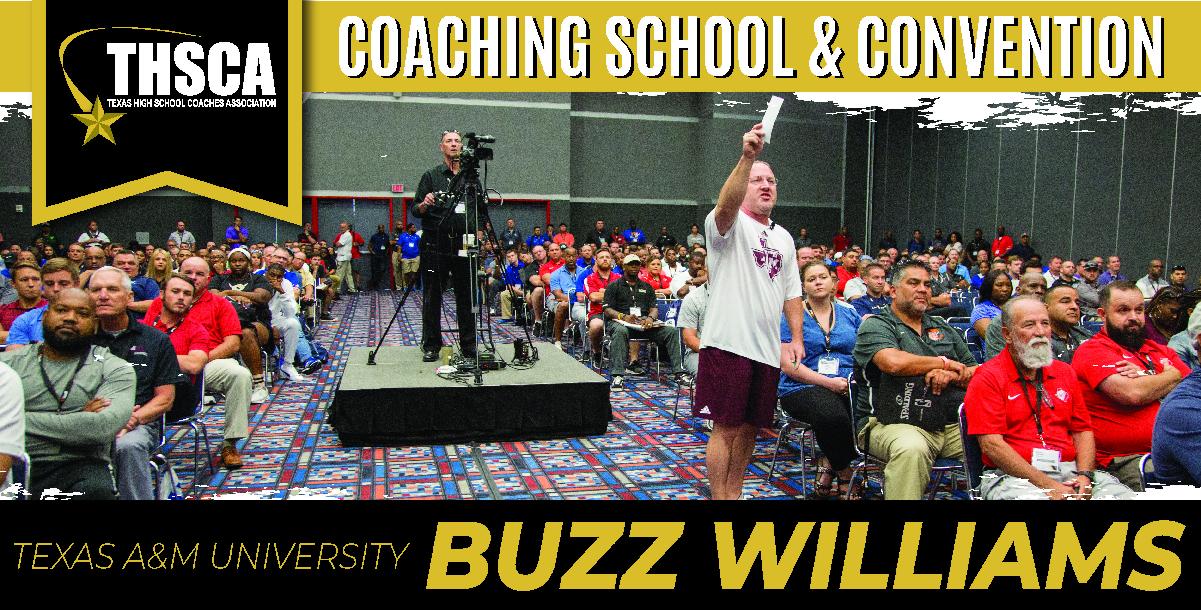 In a rare clinic presentation, Texas A & M Coach Buzz Williams discusses the challenge of building a new team based on his first 109 days in College Station, Texas.  Coach Williams also uses video clips to stress the importance of details and staying on track.  In addition, Coach Williams also shares with the audience the 3 dimensions of human performance and its application to coaching athletes.

Fresh off his third consecutive NCAA Tournament appearance, Williams returned to Aggieland after spending five seasons at Virginia Tech. His coaching career has included stints as an assistant, associate head and head coach, and he has been at the NCAA Division I level for 21 seasons. Williams has recruited and coached more than 20 players who have earned all-conference accolades, including two league Players of the Year, two conference Freshmen of the Year and four Associated Press All-Americans.

In his five years in Blacksburg, Williams led the Hokies to four consecutive 20-win seasons and four consecutive 10-win seasons in Atlantic Coast Conference play. In 2018-19 Williams guided a nationally-ranked Tech team to a 26-9 record, finishing 12-6 in the ACC. The Hokies earned a 4-seed in the NCAA Tournament and advanced to the Sweet 16 for just the second time in program history. Williams earned his 100th victory as the head coach at Virginia Tech when the Hokies knocked off Liberty in the second round of the NCAA Tournament.

In his inaugural season at Virginia Tech, Williams led the Hokies to an 11-22 overall record. He began building the culture that would allow the Hokies to enjoy future successes. The team went a long ways toward establishing an identity – one predicated on hard work, accountability both on and off the court and playing with a tough, competitive nature

Williams made the move to Virginia Tech following six seasons as the head coach of the Marquette Golden Eagles. At Marquette, he had a record of 139-69 and led the team to five NCAA Tournament appearances, including a trip to the regional finals in the 2012-13 season – the same season that the team won the Big East Conference regular-season title. Williams led the Golden Eagles to a 69-39 Big East Conference record during his time in Milwaukee. During Williams’ tenure, six Marquette players made it to the NBA.

Williams was an assistant at Marquette during the 2007-08 season. MU concluded the year 25-10 and advanced to the second round of the NCAA Tournament for the first time since 2003.

Williams arrived in Milwaukee after serving for one season as the head coach at the University of New Orleans. He guided the Privateers to a 14-win campaign in 2006-07. His roster featured Bo McCalebb, the Sun Belt Conference Player of the Year. UNO claimed fourth place in the Sun Belt’s Western Division and advanced to the league tournament quarterfinals. The squad claimed as many victories on the road that season as it had in the previous three seasons combined. His recruiting class for the 2007-08 season was ranked in the top 50 nationally by HoopScoopOnline.com.

Prior to UNO, Williams served as an assistant coach and recruiting coordinator at Texas A&M for two seasons (2004-05 and 2005-06) under head coach Billy Gillispie. Both of his recruiting classes with the Aggies were ranked among the best in the nation and featured some of the top-ranked talent at the prep level. The squad made its first NCAA Tournament appearance in 25 years in 2005-06. The previous team posted the top turnaround in the nation, improving its win total in 2004-05 by 14 games compared to 2003-04.

Williams spent four seasons (2000-01 through 2003-04) at Colorado State, where he served as an assistant the first three seasons before being promoted to associate head coach in 2003-04. Two of his recruiting classes were ranked among the 40 best in the nation, including the 2003 group, which was tabbed No. 1 in the Mountain West Conference. Colorado State made its first NCAA Tournament appearance in 13 years during his tenure, and HoopScoopOnline.com named him one of the top assistants in the country.

The Van Alstyne, Texas, native was previously an assistant at Northwestern State (1999-2000), Texas A&M-Kingsville (1998-99) and Texas-Arlington (1994-98). He earned a bachelor’s degree in kinesiology from Oklahoma City University in 1994 before completing his master’s work in the same field at Texas A&M-Kingsville in 1999.

Great words of wisdom from Buzz!

Buzz does a wonderful job of merging conversation and his subject matter in a way that it engages all levels.

Not sure what he was trying to present

Coach Buzz not only inspired many coaches and players but also motivated them to work hard.

Game Preparation - Scouting and How To Transfer To Your Team by Basketball Coaches Clinic
Views: 1728
(1) FREE

In a rare clinic presentation, Texas A & M Coach Buzz Williams discusses the challenge of building a new team based on his first 109 days in College Station, Texas. Coach Williams also uses video clips to stress the importance of details and staying on track. In addition, Coach Williams also shares with the audience the 3 dimensions of human performance and its application to coaching athletes.