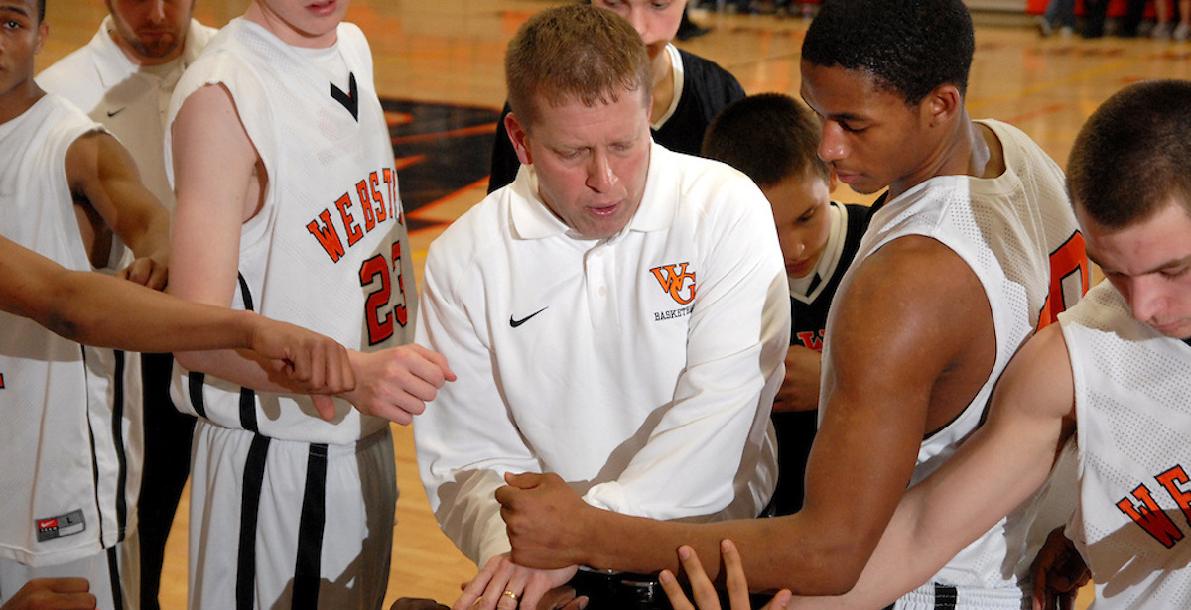 When you ask for the names of the best coaches in metro St. Louis, Jay Blossom NEVER misses the list! Blossom's record includes 349 wins, a state title and 14 conference championships in 17 years at Webster Groves Missouri High School. In this instructional basketball video, Blossom shows you over 20 drills that build team defence and mental toughness. This course is a must for your defensive collection and will give you some FRESH new ideas to improve your teams ability to lockdown opponents.

2015-2016 will mark Coach Blossom's 17th year at the helm of the Statesmen. The Statesmen are coming off a 23-6 season that included another conference championship and both Webster Classic and Coaches v Cancer Championships.  In his 16 years, he has amassed a record of 348-105 at Webster Groves High School. His overall record in twenty one seasons as a head coach is 407-172. Blossom has been named the Suburban South Coach of the Year 11 times.  Blossom has helped build the Statesmen into one of the most dominant programs in the State, winning 20 plus games in each of the last 12 years. One of the most impressive feats is the consecutive conference wins streak. The Statesmen won 83 straight conference games between 2001 and 2013.  While "the streak" ended in 2013, the Statesmen's rein atop the Suburban South Conference continues. The Statesmen headed to a new conference in 2014 with 13 consecutive conference championships.  Also during this streak, Coach Blossom guided the Statesmen to an impressive Home winning streak of 53 consecutive games. In 2008 Coach Blossom guided the Statesmen to their first State Championship since 1996, and the second in school history.  The Statesmen tied the school record for wins in a season (29) and had two tournament victories (Webster Classic & Kaminsky Classic) as well.  The Statesmen ran the table in the conference again at 7-0, and were ranked in the top 5 in the area all year long.  They finished ranked 1st overall in the Metro Large School ranking in the St. Louis Post-Dispatch, 1st overall in the Missouri state writers final poll, and ended up ranked #34 in the country according to www.hoopsusa.com.  In addition, the Statesmen set school records for points in a season, and free throw percentage. Under Blossom, the Statesmen have had an unparalleled run of success.  They have won 14 Conference Championships, 6 District Championships, made 4 appearences in the State Quaterfinals. He has also led them to 13 twenty plus win seasons and the 2008 Missouri Class 5 State Championship. Blossom has guided 14 players to play in college. Just recently, Brennan Coltrane sgined with Milliken University and Trey Adams signed with Greenville College. Derrick Dilworth is playing at Columbia College. Vinnie Raimondo is currently playing here in St. Louis at UMSL. Blossom has also developed five all state players, and 10 conference players of the year.  Blossom hold a Masters Degree from William Woods University in Administration, and is a graduate of the University of Central Missouri, graduating in 1988.  During his time at UCM, Blossom was a student assistant to the basketball team.  Blossom graduated from Hickman High School in Columbia in 1982, where he was born and raised.   Blossom is happily married to Julie Blossom, and has two daughters, Danielle (18) and Gabrielle (15).