The Blocker-Mover Approach to Motion Offense, A Masterclass 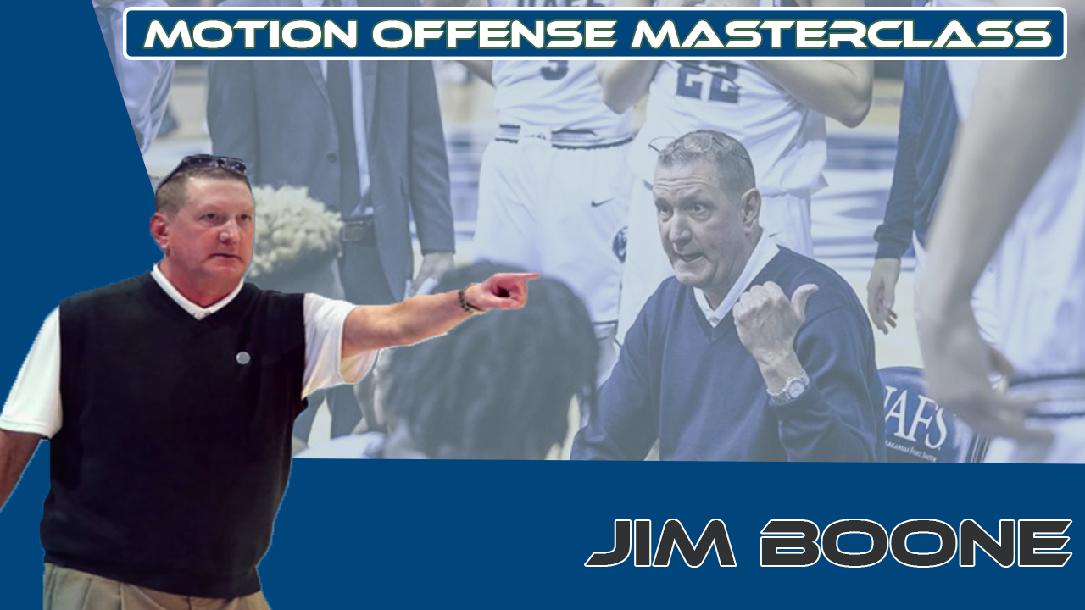 Legendary HOF Coach Jim Boone releases his Blocker Mover Approach to Motion Offense, A Masterclass Course, where he covers everything you need to know about this simplistic approach for both Players and Coaches. Coach Boone has provided very specific roles and responsibilities for Screeners and Cutters, in order to enhance and shorten the learning curve associated with Motion Offense. The Pairs Alignment provides specific Offensive Progressions for the Decision Maker creating a 1-2-3 thought process in getting to the Next Action. The Alignment creates specific movements for Driving opportunities and Bailout Passing options.  As well, Coach Boone reviews how to incorporate the modern day approach to offense with Ball Screen situations. And lastly, Coach will walk you through, with both instruction and video demonstation, how to develop the Offense. If you are looking to master your motion offense with a simplistic yet ultra successful approach, this course is for you.

Coach Boone breaks down Game and Practice Film into detail, sharing his lifetime of experience as a successful collegiate head coach on how to perfect your motion offense.

What The Competition is Saying About Coach Boone's Offensive Approach

"Jim Boone is as good a teacher as their is in our game.  While Coach Boone is best known for his ability to build a high level defensive system, I have been equally impressed with his offensive scheme and execution. Their relentless ball and player movment along with quality purposeful screening makes them as tough to guard as anyone I've coached against.  They get their best players great shots consistently regardless of your defensive efforts. Jim Boone is a master teacher on both ends of the floor!"

"Coach Boone runs a 'Mover/Blocker' type of motion offense that is extremely difficult to defend.  What makes it so effective is how hard their players cut and screen, their timing is perfect and they force you to guard actions on both sides of the floor.  Because of that, it's difficult to get to any help positions once the ball is entered to a side. The two games we hated to prepare for every year were the games vs Coach Boone's teams at Delta State.   We knew we were in for a physical and demanding game for 40 minutes. I have tremendous respect for Coach Boone and how he runs his program."

"Jim Boone is one of the best teachers of motion offense in the country.  His teams are always difficult to guard because of their screening and cutting.  His players have a great feel and understanding of reading the defense and making the correct move.  The screeners are always physical and wear down defenders which allows the best shooters to get more shots and open shots.  His teams are efficient and effective in creating quality scoring opportunities.  Jim Boone breaks down the offense and is a great teacher of motion whether he is teaching pairs, triangle, or five out."

"Coach Boone's Offense is a manifestation of their Program's Culture; Grit and Toughness.  It was a perfect compliment to their Blue Collar Defensive approach.  It made their Defense better and in turn, their patience and relentless screening made them very difficult to defend."

"After attending Coach Boone's Fall Clinic and watching his Mover-Blocker Approach to Motion Offense, A Master Class, we went away from our 5-Out Motion approach of over 40 years and adopted the Pairs Offense Mover/Blocker system.  We have experienced tremendous success with this system of play over the last four years, winning 80 games and a State Title while making the State Tournament each year.  Coach Boone certainly made big believers out of us with his approach and the Pairs Offense.  I would highly recommend the Master Class, regardless of your offensive system of play, you will garner several gold nuggets from Coach Boone's presentation."

This course on offensive basketball is one of the best i have ever seen , if not the best. Coach Boone does a great job of illustrating how he installs the mover blocker motion offense. This course would be valuable for any coach because it shows all the different screens (flare, down, pin down, ball screens) in very detailed manners. The film clips are great. We have been running this offense for 4 years and we found nugget in this course that we know will make us better. Thanks , Coach Boone, outstanding job.

You just booked "The Blocker-Mover Approach to Motion Offense, A Masterclass"