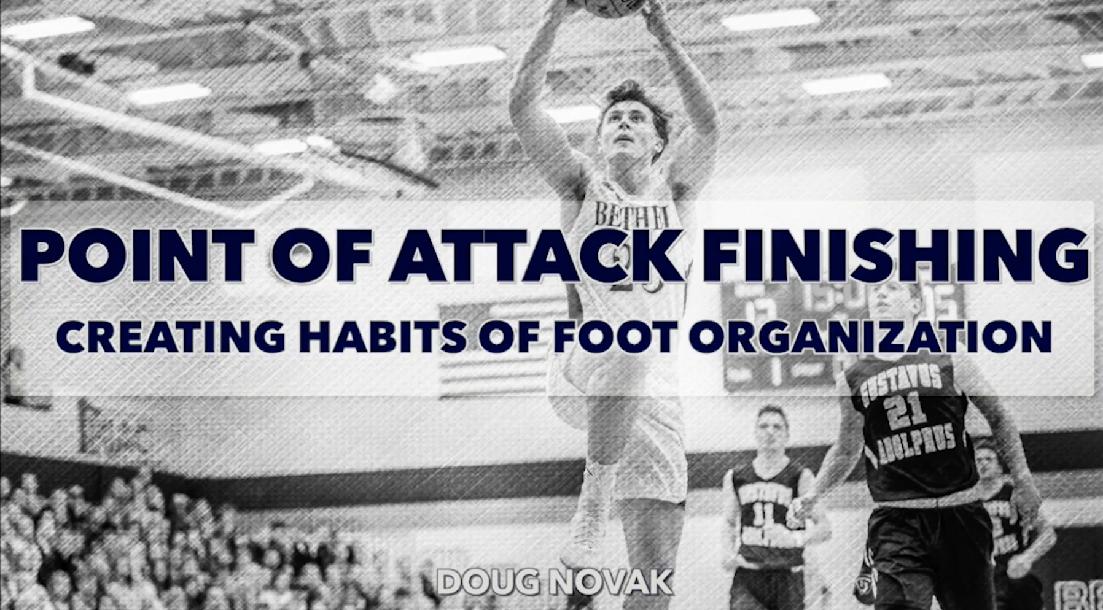 Our offensive philosophy revolves around making simple plays multiple times within a possession as we fight for vision, time and space.  This video concentrates on the Point of Attack -- how we finish an action.   We are either trying to find or make space with our finishing plan.  The simplicity of our foot organization with a coordinated “pop” allows us to bring order to chaos while playing with speed and freedom.

Our goal is to build a bullet proof foundation for why we do what we do.  The Point of Attack video will show how we create habits that hold up under pressure.

Finishing School Series is designed todevelop skills from our finger tips to elbows while we learn how to hide the ball with our face.

We will teach timing, rhythm and balance through our “Freeze Drill”.
17 different finishes using the same footwork are demonstrated along with 11 post moves.
Each player will develop their own blueprint of go-to moves and counters.
SPEED AND ANGLES

Building on our Finishing School Series, we execute choreographed speed finishes from different areas of the floor along with turning drives into post ups.
ADVANTAGE/ DECISION TESTING

We test our finishing skills with 5 different pressure advantage drills building from 1-1 to 4-4.
Practice drills are followed by game footage.
BONUS FOOTAGE

BETHEL
​• Record of 112-52 in six seasons at Bethel—the highest winning percentage (.682) of any Bethel basketball coach

• Four wins over nationally-ranked opponents in 2015-16, including a win over the No. 3-ranked team on their home court

• Freshman named to All-Conference team in first two seasons, no other team in history has had two freshman awarded All-MIAC accolades in consecutive seasons

• Coached and developed over 20 professional players

TENNIS
• Played on the No. 1 nationally ranked collegiate tennis team at the University of Tennessee
• Served as an assistant tennis coach at Clemson University

PERSONAL LIFE
• Doug and his wife Tonya reside in Eagan with their daughters Mackenzie, Sarah and Grace
• Originally from Brandon, South Dakota
• Wife Tonya was All-Big Ten tennis player at the University of Minnesota

Here are a few things I enjoyed about this video, which also makes it easy to watch, learn, and teach. Application Game & practice video examples Drills Quotes Terminology

A breadth of finishing drill, shooting drills, and offensive concepts