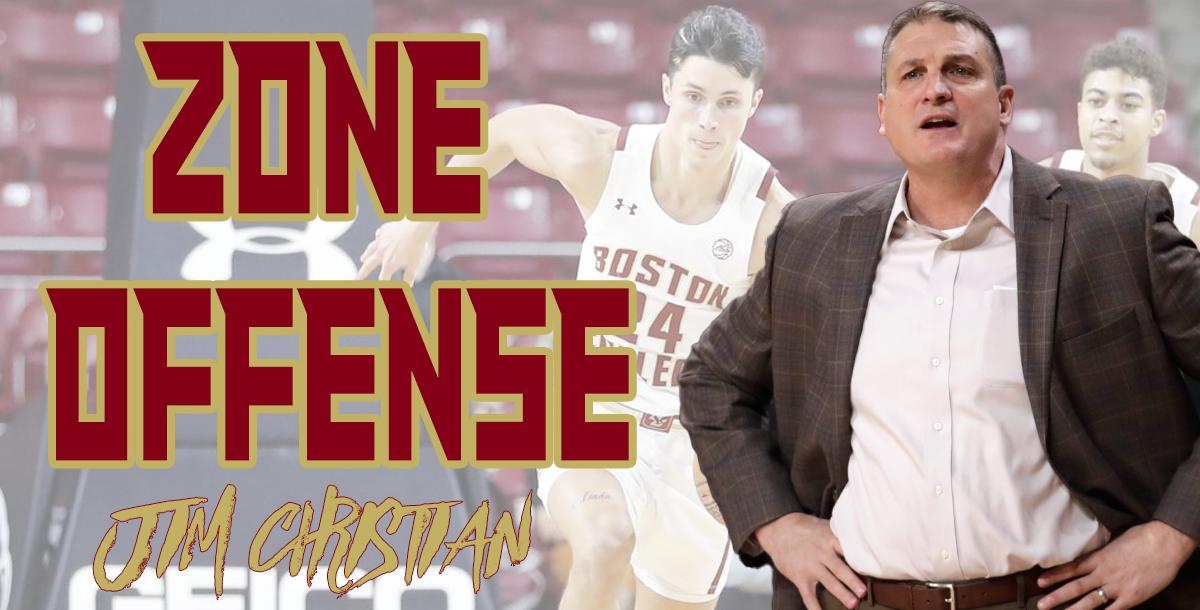 Jimmy Christian outlines how to cope with complicated zones. The importance of adaptation and change is where he will shine as he walks you through how Syracuse holds their zone. This course is a must for any coach looking to run and attack a zone.

Jim Christian enters his sixth season on the Heights in 2019-20.  Named the 12th head men’s basketball coach at Boston College in April 2014, Christian has helped inspire a turnaround in the Eagles program on and off the court.

This past season, Christian led BC to its highest finish in the ACC standings in six years.  The injury-added Eagles were 11th in the league despite having starters miss 40% of the season.  Ky Bowman - the nation’s most dynamic guard - ranked among the conference leaders in points, rebounds, assists, and 3-point shooting as he earned All-ACC second-team honors.  Bowman became Christian’s second NBA player in as many seasons, as he signed a deal with the Golden State Warriors.

In his six seasons at the helm of BC men’s basketball, Jim Christian has recruited and developed five All-ACC honorees, the program’s first-ever NBA Lottery Pick, and an Associated Press All-American.

In 2017-18, Christian helped guide BC to a 19-win season - the most victories since the 2010-11 season - and a return to the postseason.  The Eagles’ season was highlighted by a win over top-ranked Duke in December, a trip to the quarterfinals of the 2018 ACC Championship, and a bid to the National Invitation Tournament.

Under Christian’s tutelage, Jerome Robinson became Boston College’s fifth All-American and first-ever NBA Lottery Pick.  Runner-up for 2017-18 ACC Player of the Year, Robinson was selected 13th overall in the first round by the Los Angeles Clippers.  In his 13 seasons as a head coach, Christian has coached five All-Americans and 34 all-conference selections and has guided his teams to the postseason on nine occasions.

Christian and his staff developed one of the top-scoring backcourts in the country in 2016-17. The duo of Jerome Robinson (17.4 ppg) and Ky Bowman (17.4) combined to average 34.8 points per game in ACC play which ranked fifth in the country among the major conferences. Robinson finished fourth in the conference in scoring (18.7) and earned All-ACC Honorable Mention accolades. Bowman was named to the All-ACC Freshman Team after averaging 14.3 points per game. He was also the only ACC freshman to rank in the top 10 in seven different categories in league play.

In his first season at Boston College, Christian guided guard Olivier Hanlan to First Team All-ACC and honorable mention All-America honors. Hanlan was the leading scorer in the ACC (19.5) which ranked 22nd in the country. He also led all major conference players in scoring average during league play (21.9). In addition, Hanlan led the ACC in 3-point percentage (.436).  He was drafted by the Utah Jazz in the second round (42nd overall) of the 2015 NBA Draft.

Prior to moving to Chestnut Hill, Christian spent two seasons as head coach at Ohio, leading the Bobcats to a 49-22 record in that time. He is the Mid-American Conference's all-time leader in winning percentage (187-80, .700) and reached 20 wins in eight seasons as a head coach in the conference.  His .731 winning percentage in league games (101-37) is second-best in MAC history.  Christian also spent six seasons at Kent State from 2002-08.

In his first season at Ohio in 2012-13, the Bobcats went 24-10 and earned a bid to the NIT. Ohio captured the MAC regular-season title - the school's first since 1994  - and tied the program record with 14 league wins and seven road victories. He was named the NABC District 14 Coach of the Year.

In 2013-14, the Bobcats went 25-12 and advanced to the quarterfinals of the College Insider Tournament. It was just the third time in school history that an Ohio team reached 25 wins.

Prior to his time at Ohio, Christian was the head coach at TCU from 2008-12. While in Fort Worth, he led the Horned Frogs to their first postseason appearance since 2005 when they played in the 2012 College Basketball Invitational.

He coached six All-Mountain West players while in Fort Worth, including guard Hank Thorns, Jr. - a first-team All-MWC honoree who was the only player in the country to rank in the top 12 in both assists and assist/turnover ratio in 2010-11.

Christian began his head coaching career at Kent State where he compiled a record of 138-58 (.704). He led the Golden Flashes to five postseason appearances in his six seasons at the helm. He earned MAC Coach of the Year accolades in 2006 and 2008, both times leading Kent State to the conference title and an appearance in the NCAA Tournament. The Golden Flashes earned NIT berths in each of his first three seasons.

Kent State won at least 20 games every year with Christian at the helm. He guided the Golden Flashes to the program's first-ever top 25 ranking in both the Associated Press and ESPN/USA Today polls.  Kent was No. 23 on the Associated Press poll and 24 on the USA Today/Coaches poll, released on Feb. 25, 2008.

The 2007-08 season was one of the best in Kent State history. The Golden Flashes finished 28-7, including a school-record 25 regular-season wins.  Kent won both the MAC regular season and tournament championships and earned a program-best no. 9 seed in the NCAA Tournament.

While in Kent, Christian mentored two All-Americans (Antonio Gates, DeAndre Haynes), two MAC Players of the Year (DeAndre Haynes, Al Fisher), three MAC Defensive Players of the Year (Demetric Shaw, John Edwards, Haminn Quaintance), one MAC Sixth Man of the Year (Kevin Warzynski) and a total of 19 All-MAC selections, including six first-teamers.  Gates signed with the San Diego Chargers of the National Football League and has put forth one of the finest careers as a tight end in pro football history.

Christian served as an assistant coach at Kent State in 2001-02, when the program advanced to the NCAA Elite Eight.  Prior to Kent, Christian was an assistant at four different programs.

While at Pittsburgh from 1996-99, Christian guided the development of Vonteego Cummings, a two-time All-Big East player who went on to play for the Philadelphia 76ers and Golden State Warriors.  During the 1995-96 season, Christian was part of the Miami (Ohio) program that posted a 21-8 overall record - including a 12-6 mark in MAC play - en route to a trip to the NIT.

He served two stints as an assistant at Western Kentucky, including the highly-successful 1994-95 season in which the Hilltoppers went 27-4, including a 17-1 record in the Sun Belt Conference, en route to a conference championship and NCAA Tournament appearance. The 27 wins were the fourth-most in program history.

From 1999-2001, Christian was a college basketball talent evaluator at Octagon Sports Marketing and Management.

Jimmy Christian outlines how to cope with complicated zones. The importance of adaptation and change is where he will shine as he walks you through how Syracuse holds their zone. This course is a must for any coach looking to run and attack a zone.