Influence and Responsibility of a Coach | Colt McCoy 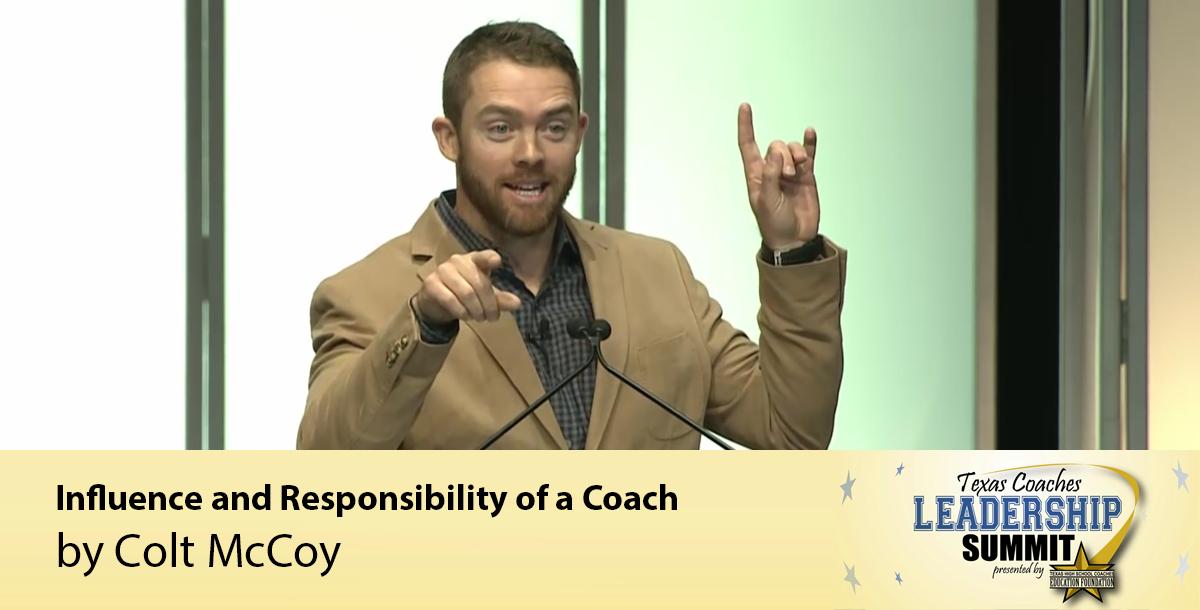 Colt has been around coaches his entire life. The son of a Texas High School coach and a phenomenal athlete himself he has had first hand experience with the influential power of a coach at all levels. Listen to him share stories of the powerful influence coaches have been in his life. His experiences as an athlete will quickly remind you of the amazing and immense responsibility that comes along with the title "Coach"!

1 "Influence and Responsibility of a Coach" by Colt McCoy 0:00

Daniel "Colt" McCoy is an American football quarterback for the Washington Redskins of the National Football League (NFL). He was drafted by the Cleveland Browns in the third round of the 2010 NFL Draft, after playing college football for the University of Texas. He has also been a member of the San Francisco 49ers.

McCoy was the starting quarterback for the Texas Longhorns from 2006–2009 and won the 2008 Walter Camp Award, was the 2008 Heisman Trophy runner-up and was a 2009 Heisman finalist. McCoy is second to Boise State's Kellen Moore in games won by a NCAA Division I quarterback. In his senior year, he won 13 of the top 15 major college player awards including quarterback of the year, offensive player of the year and outstanding football player of the year.

After sitting out the 2005 Longhorn season as a redshirt, McCoy was the starting quarterback for the 2006 Longhorn team. On November 4, 2006, McCoy threw his 27th touchdown pass in a win against Oklahoma State, to take sole possession of the Texas school record for most touchdowns ever thrown by a quarterback in a single season. Subsequently, in the 2006 Alamo Bowl on December 30, McCoy threw two touchdowns against Iowa Hawkeyes football to tie Nevada's David Neill for second place for freshman touchdowns in a single season. Also during the 2006 season, McCoy was named College Football News Big 12 Player of the Year and was named the quarterback to their "All Freshman Team." Injuries caused him to miss portions of the final regular season games, but he was able to play for the entire duration of the Longhorns' bowl game.

Leading the 2007 Longhorns, McCoy was somewhat less consistent. Through the first five games he threw nine interceptions—two more than he threw in the entire 2006 season. He went on to throw 18 interceptions during the 2007 season.

Leading the 2008 Texas Longhorns football team, McCoy and the Longhorns began the season with eight straight wins, including a win over then #1 Oklahoma, #6 Oklahoma State and #11 Missouri. His performance helped the Longhorns rise at one point to the #1 ranking in the national polls, although UT lost to Texas Tech University and finished ranked third in the BCS standings. In 2008 McCoy set school records for most career touchdown passes, most touchdown passes in a season, most total touchdowns by a Texas player, most career wins, and most career passing yards. In addition to setting passing records, McCoy led the team with 561 yards rushing and eleven rushing touchdowns, establishing a reputation as a dual threat quarterback. McCoy was named the 2008 AP Big 12 Offensive Player of the Year.

You just booked "Influence and Responsibility of a Coach | Colt McCoy"