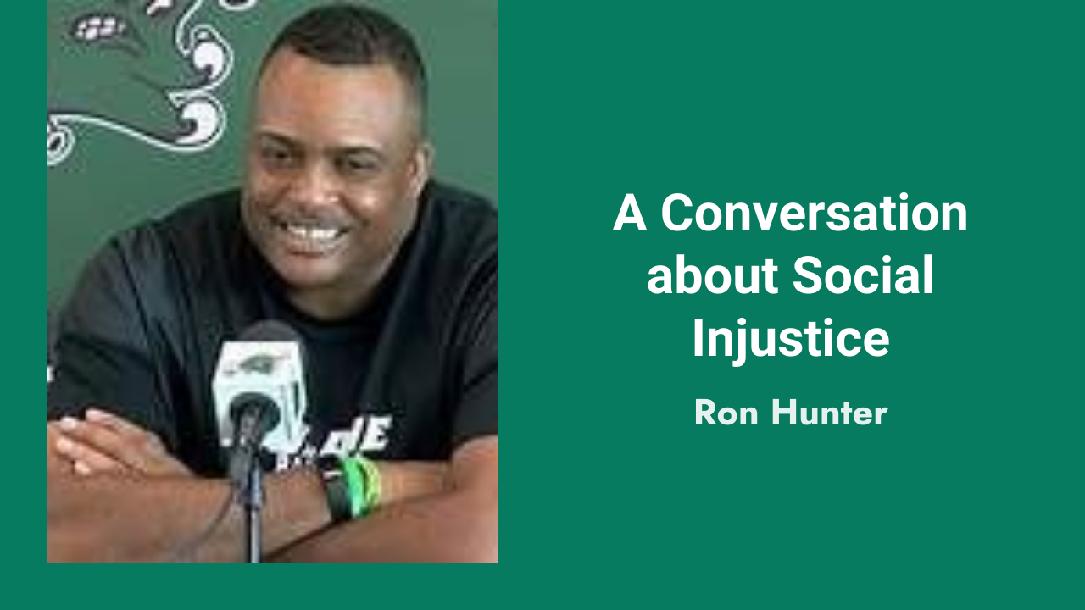 Coach Ron Hunter of Tulane shares his thoughts and feelings on the topic of social injustice during this clinic presentation from the Louisiana High School Coaches Association 2020 Virtual Clinic.

Ron Hunter was introduced as the 25th men's basketball head coach in Tulane history on March 26, 2019 and enters his second season leading the program in 2020-21.

Hunter arrived at Tulane after spending eight seasons at the helm of Georgia State University’s program where he compiled a record of 171-95. In 25 years on the bench, Hunter owns a career record of 457-332 and has been named conference coach of the year three times. His 374 wins at the Division I level prior to taking the helm in New Orleans made him the winningest coach ever hired to lead Green Wave basketball.

During his eight-year tenure at GSU, Hunter directed the Panthers to six postseason appearances, including three trips to the NCAA Tournament in his final five seasons.

Prior to his arrival at GSU, Hunter spent 17 seasons at IUPUI, where he guided the program through its transition from the NAIA and Division II levels into NCAA Division I and the Summit League. He is the school's winningest coach, both in number of victories and winning percentage, and he led IUPUI to its only appearance in the NCAA tournament in 2003 in just the school's third season as a Division I program.

Prior to his arrival at IUPUI, Hunter spent one year as the top assistant coach at his alma mater, Miami University (Ohio), under former Arizona State head coach Herb Sendek. During that season, the Redhawks were 19-10, finishing second in the Mid-American Conference (MAC) and making an appearance in the postseason National Invitation Tournament (NIT).

Hunter's coaching career began in 1987, when he served as an assistant at Wisconsin-Milwaukee.

Off the court, Hunter earned national notoriety for his humanitarian efforts, partnering with Samaritan's Feet, an organization that collects shoes for underprivileged children around the world.

Hunter’s resume includes numerous national honors including an NABC Guardians of the Game Pillar Award for Service, the 2009 Giant Steps Award from the National Consortium for Academics and Sport (NCAS), a Minority Achievement Award from the Center for Leadership Development (CLD) and the 2018 Gene Bartow Award.

He was one of seven head coaches who served on the Division I Basketball Academic Enhancement Group, as appointed by late NCAA President Myles Brand, and he is a member of the National Basketball Coaches Association (NABC) Board of Directors. He served as President of the NABC in 2015-16 and served on an ad hoc committee to the NCAA Selection Committee in 2016-17.

He was honored by the American Diabetes Association in May 2015 as its Father of the Year and a week later earned the Positive Collegiate Coach of the Year at the Georgia Positive Athlete Awards.

Hunter earned his bachelor's degree in education at Miami (Ohio) in 1986 and added a master's in 1987. He was a standout player on strong Miami teams of the mid-1980s, along with high school and college teammate Ron Harper, who went on to enjoy a long NBA career. The Redhawks were 81-30 during Hunter's four-year career and earned three consecutive NCAA tournament berths while winning two MAC championships.

Adopting and Utilizing a High-Performance Mindset by Brijesh Patel
Views: 2215
$40

Coach Ron Hunter of Tulane shares his thoughts and feelings on the topic of social injustice during this clinic presentation from the Louisiana High School Coaches Association 2020 Virtual Clinic.