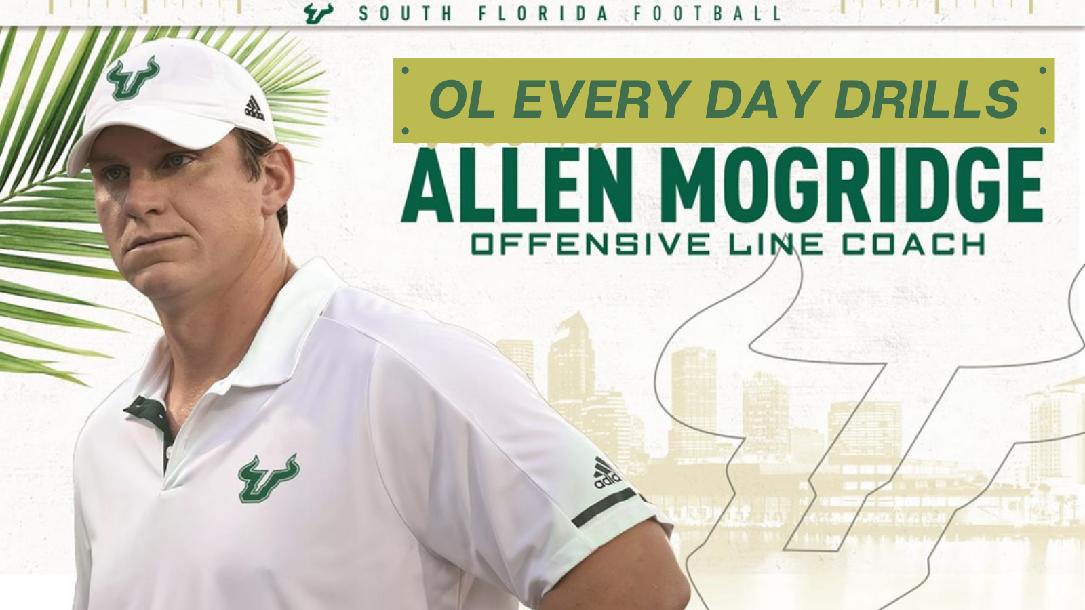 Coach Allen Mogridge talks about the EDD's for his OL with regards to both the run and pass game.

Allen Mogridge was named offensive line coach/assistant head coach on Dec. 24, 2019, joining head coach Jeff Scott’s first USF football staff. Mogridge came to USF after serving the previous three seasons as assistant head coach/offensive line coach under Butch Davis at FIU, leading an offensive line that ranked among the top 10 nationally in sacks allowed each of the last two years. He brought nearly 20 seasons of experience to Tampa and has been part of 13 bowl appearances as a player and coach.“I am thrilled Allen will be leading our offensive line,” Scott said. “He brings nearly 20 years of college coaching experience and has done a tremendous job building offensive line units that protect the quarterback and lead the way for a strong running attack.”Mogridge was a part of three straight bowl appearances during his time at FIU (2017-19), including a 2018 Bahamas Bowl victory that capped a program-record 9-4 campaign for the Panthers. FIU posted a 23-16 record in his three seasons on the staff. In his first season at FIU (2017), Mogridge helped tie a program record for wins in a season as the Panthers went 8-5. FIU set single-season school records in passing yards (3,031), completion percentage (63.6%), pass efficiency (138.7) and first downs (269), as the Panthers gained 5,100 yards of total offense, just 37 yards shy of another school record. The offensive line allowed 29 sacks, the team’s second-lowest total since 2011, and plowed the way for the second-most rushing touchdowns (20) and yards (2,069) in school history. FIU finished with four games with over 200 yards on the ground and their 379 rushing yards against UMass ranked as the third-most in school history.