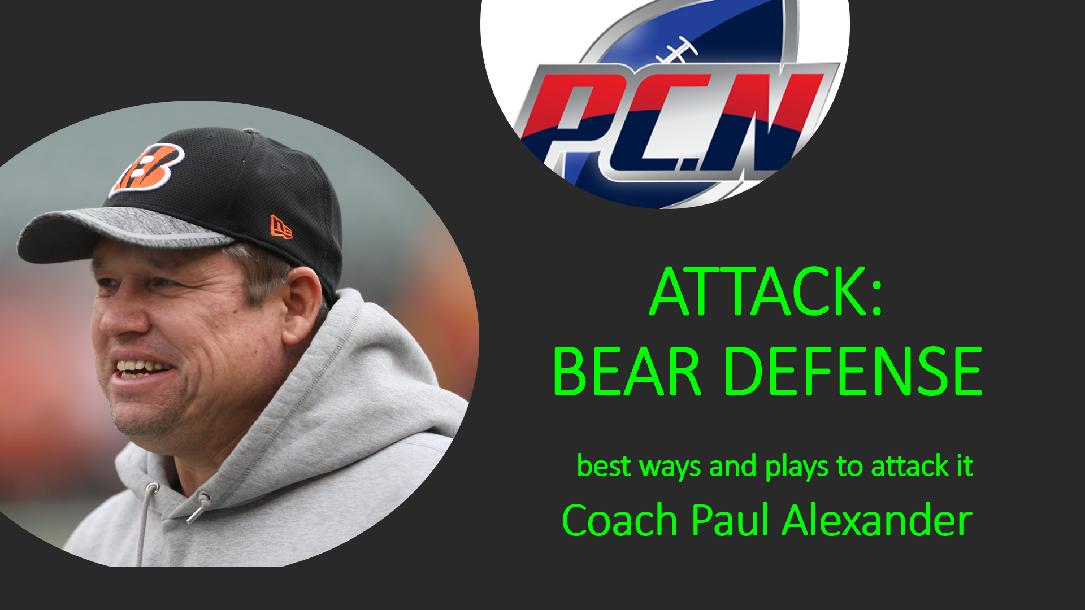 The BEAR DEFENSE, yes you can run the ball and protect against the BEAR.

In this course, Coach Paul Alexander takes you through the history, theory, variations and strengths of the defense. He then dissects the scheme and shows you how to attack the weaknesses. And yes, there are weaknesses … both run and pass. Coach Alexander broke two long standing NFL rushing records in games versus the BEAR and EIGHT MAN fronts. He holds back no secrets in this course. Learn the best plays and ways to attack the BEAR.

ATTACK: the BEAR defense … plays and ways that work!

1. History and Theory of BEAR DEFENSE

3. INSIDE ZONE plays vs BEAR

5. OUTSIDE RUNS vs BEAR … TOSS and OUTSIDE ZONE

7. POWER and COUNTER plays vs BEAR

Coach Alexander does an excellent job not only explaining the “how-to’s” of plays versus bear, but also the “why’s.” This lesson is clear, concise and applicable for any coach looking to expand his or her’s knowledge of the game.

I knew virtually nothing about how to attack a BEAR defense before this. All I can say is WOW! So many scenarios broken down. Looking forward to taking Coach Alexander's tips onto the field.

Excellent course and tremendously helpful. I learned so much.

Very informative....picked up several thoughts that I think will be helpful down the road vs. Bear fronts.

Great course! Very informative. Will give a coach a highly effective tool set to address a defense that, historically, has been a a disruptive scheme for running games.