Attacking the 4-4 Defense with The Triple Gun Offense 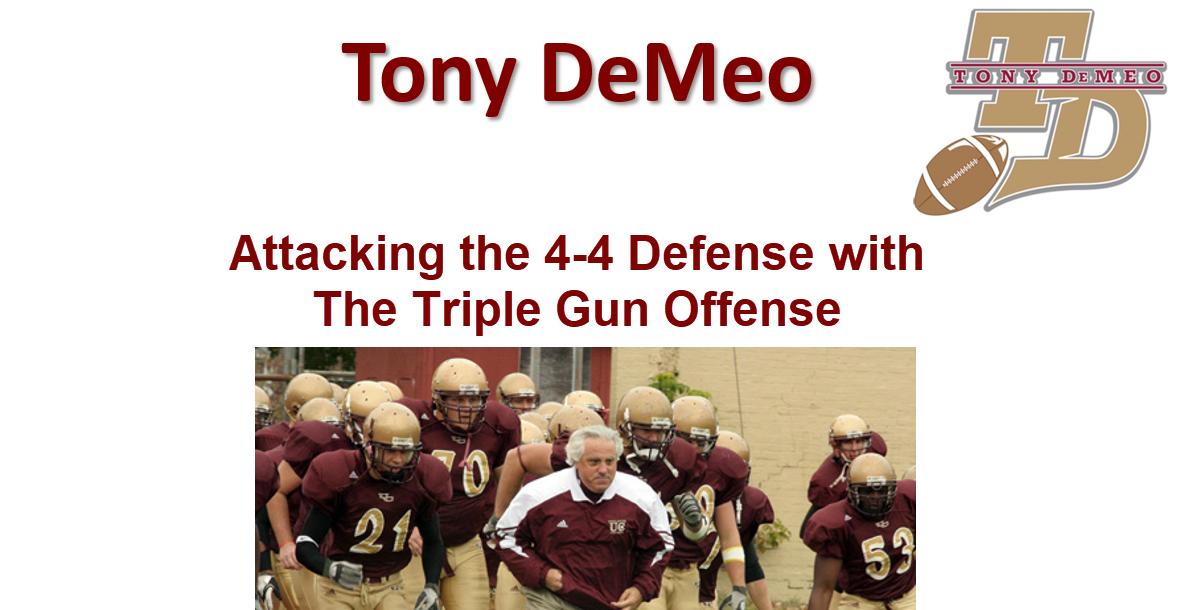 Attacking the 44 Defense focuses on the weaknesses inherent in a 4-4 Defense and how to attack them with the Triple Gun Offense (and for that matter - ANY Offense !)

This course is another collaborative effort between Coach Tony DeMeo and Option Central that starts with an overview of the 4-4 Defense along with a Philosophy, Strategy and Tactics for how to attack it.

"It all starts with the Gun Triple" and the course opens with a "deep dive" into the "core play" in the Offense. Game video is used extensively by Coach DeMeo to illustrate Give, Keep and Pitch reads as well as how the Gun Triple adapts to Defensive tactics such as "stemming".  Coach DeMeo explains how to use formations and motion to attack the defense, and create advantages for the Offense while making it possible to get the ball to any ball carrier.

This comprehensive course also includes sections on the Triple Gun Quick Game, Double Options that "put speed in space" and "make the big guys chase", and the Play Action Passing game off the Gun Triple that takes advantage of the inherent weaknesses of 3 Deep coverage schemes by attacking seams with the Hitch/Seam combination.

Also included is a collection of Supplemental Runs that are ideally suited to attacking a 4-4 that features the Half Reverse and the QB Iso.  The course concludes with a section on Spreading the Defense with Empty sets, and includes two RPOs that, like many of the aspects of Coach DeMeo's Offense were "ahead of their time".

Recognized and respected as a Head Football Coach at the Collegiate level, an Offensive innovator and the creator of the Triple Gun Offense, Coach Tony DeMeo has published numerous books and DVDs and remains a popular speaker, teacher and clinician.  Coach DeMeo has a football-oriented web site at tonydemeo.com

It's a blueprint for how to beat the 4-4 defense. Very comprehensive