Begin with the End in Mind | Jeff Traylor 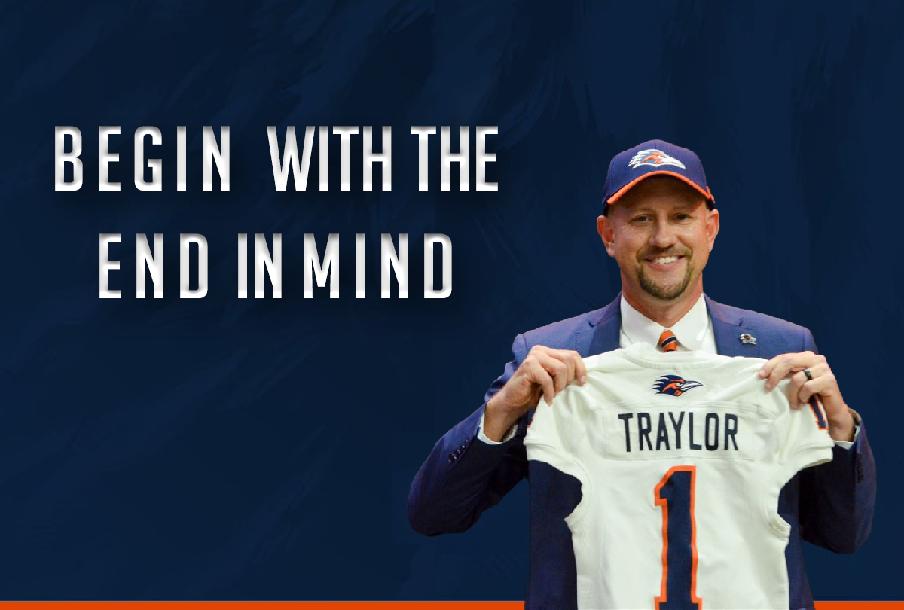 In this course, Coach Jeff Traylor speaks about beginning with the end in mind. By that, he means to have a plan or goal of what you want and work backward from it, figuring out the steps you need to take in order to achieve your goal. He even covers things like loyalty and how your players are a reflection of you. With all that being said he even manages to speak on his offense so you can learn about UTSA's offense from the Head Coach himself.

The University of Texas at San Antonio, Head Coach

A native of Gilmer, he served most recently as associate head coach and running backs coach for two seasons at Arkansas, where he helped sign the school’s first top-20 recruiting class. Prior to that, he served in the same role at SMU for the 2017 season. He began his collegiate coaching career as the special teams coordinator and tight ends coach at Texas in 2015 before becoming the Longhorns’ associate head coach for offense and wide receivers coach the following year.

Traylor’s impact on the offense was felt immediately in his first season at Arkansas, as his running backs corps racked up 1,721 yards and 11 touchdowns in 2018. The unit was led by Rakeem Boyd, who rushed for more than 100 yards in three different SEC games, including a season-best 113 against Vanderbilt. The Houston Stratford High School product took over the starting tailback role in the fifth game of the season came and his most impressive stretch of the season came during a four-game stretch against Alabama, Ole Miss, Tulsa and Vanderbilt, as he topped the century mark three times and totaled 423 yards. His 102 yards against Alabama made him the first Arkansas running back to eclipse 100 yards against the Crimson Tide since Darren McFadden in 2007.

In Traylor’s second season coaching the Arkansas running backs, Boyd rushed for 1,133 yards and eight touchdowns on 184 carries (6.2 avg.) to spearhead a ground game that accumulated 1,766 yards. Boyd topped 100 yards in five contests, including a season-best 185 and two scores on just eight attempts against Western Kentucky. He also rushed for 100-plus against Portland State (114), Colorado State (122), Kentucky (134) and Mississippi (114).

Prior to his time at Arkansas, Traylor spent the 2017 season as associate head coach and running backs coach at SMU under Chad Morris. He also served as the Mustangs’ interim coach before joining Morris' staff at Arkansas.

During his one year at SMU, Traylor’s running backs piled up 2,223 yards on the ground. Three players rushed for 500-plus yards, with Xavier Jones leading the group at 1,075. The Mustangs topped the 200-yard mark on the ground six times, including a season-best 311 in a win against Arkansas State. SMU ranked in the top 20 nationally in several offensive categories, including 12th in scoring offense and 15th in total offense.

Prior to his time in Dallas, Traylor spent two seasons at Texas. He was the tight ends coach and special teams coordinator in 2015 and then the associate head for offense and wide receivers coach in 2016, when the Longhorns boasted the nation’s No. 16-ranked offense that averaged 491.3 yards per game. During his time as the lead recruiter, he helped the Longhorns sign the No. 7-ranked recruiting class in the country in back-to-back years and was named Scout.com’s Big 12 Recruiter of the Year. He recruited punter Michael Dickson, who went on to earn multiple All-America honors, win Big 12 Conference Special Teams Player of the Year in 2016 and 2017 as well as the 2017 Ray Guy Award, and currently punts for the Seattle Seahawks.

Traylor built his hometown program into a prep powerhouse during his 15-year tenure.

In 2014, his undefeated Class 4A Division II state championship team boasted one of the most prolific offenses in Texas prep history. Gilmer scored 950 points in 16 games, the second-most in state history, averaging 59.4 points and 536.1 yards per game. The Buckeyes topped 60-plus points nine times, including two 80-point performances. Gilmer also averaged 536.1 total yards per game (8,577 yards) behind a balanced 293.9 passing yards and 242.1 rushing yards per contest. The defense was equally dominant, allowing only 276 points (17.3) with five single-digit efforts and two shutouts, while recording 23 interceptions and forcing 17 fumbles. Gilmer closed out the season with a win over West Orange-Stark and had eight different players earn 4A All-State honors from either the Associated Press or Texas Sports Writers Association.

Gilmer’s two other state titles under Traylor both came in Class 3A in 2004 (Division II) and 2009 (Division I), before the change in class structure in Texas high school football moved the school into 4A. After 15 years on its sidelines, Gilmer renamed Buckeye Stadium to Jeff Traylor Stadium to honor his successful career.

A 1986 graduate of Gilmer High School, Traylor earned both undergraduate (1990) and graduate (2002) degrees in education from Stephen F. Austin while playing football as a walk-on.

He and his wife, Cari, have three children: Jordan, Jacob and Jaci.

Coach Traylor does an excellent job articulating his end to end strategy to building a program and leading a successful organization based on years of experience!

You just booked "Begin with the End in Mind | Jeff Traylor"