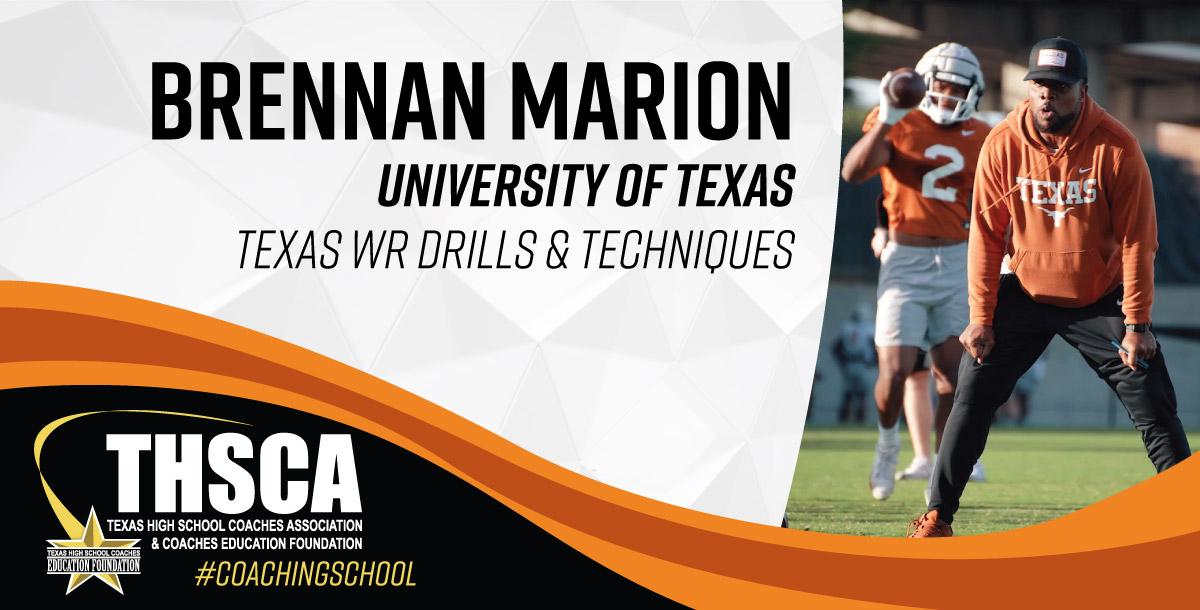 One of the nation’s most highly regarded assistants who coached the 2021 Biletnikoff Award winner, Brennan Marion joined the Texas Football staff as passing game coordinator and wide receivers coach on December 31, 2021. A record-setting collegiate receiver himself, Marion has extensive coaching experience at both the high school and college levels, including three seasons as an offensive coordinator.

In 2021, Marion was a part of a Pitt staff that directed one of the nation’s most explosive offenses. Serving as wide receivers coach for an offense that ranked among the nation’s top eight in scoring (41.4 ppg/4th), total offense (486.6 ypg/8th) and passing offense (337.4 ypg/8th), he helped lead the Panthers to an 11-3 record, their first-ever ACC Championship, a No. 12 final regular-season ranking and a berth in the New Year’s Six Chick-fil-A Peach Bowl.

Prior to Pitt, Marion was wide receivers coach at Hawaii in 2020, where oversaw the development of All-Mountain West Conference (MWC) receiver Calvin Turner. In 2019, Marion was the offensive coordinator and quarterbacks coach at William & Mary, where he dramatically improved the Tribe’s production in every major statistical category. William & Mary nearly doubled its scoring average while its total offensive output increased by almost 100 yards per contest. Marion’s first Division I coaching opportunity came at Howard University, where he enjoyed two exceptional seasons (2017-18) as the Bison’s offensive coordinator and quarterback’s coach.

During his college coaching career, he has earned prestigious invitations to the NFL Quarterback Coaching Summit and American Football Coaches Association’s (AFCA) 35 Under 35 Leadership Institute. A 2009 graduate of Tulsa, Marion was a record record-setting receiver for the Golden Hurricanes. In two seasons at Tulsa (2007-08), he compiled 2,356 yards on 82 receptions with 19 touchdowns. He was a two-time All-Conference USA selection and the 2007 C-USA Newcomer of the Year. Marion set NCAA records for yards per catch in a season (31.9 in 2007) and career (28.7).

A native of Greensburg, Pa., Marion was a four-year letterman in three different sports (football, basketball, and track) at Greensburg Salem High School. He played receiver and defensive back under Golden Lions head coach George Kermer and was an All-Keystone Conference honoree.