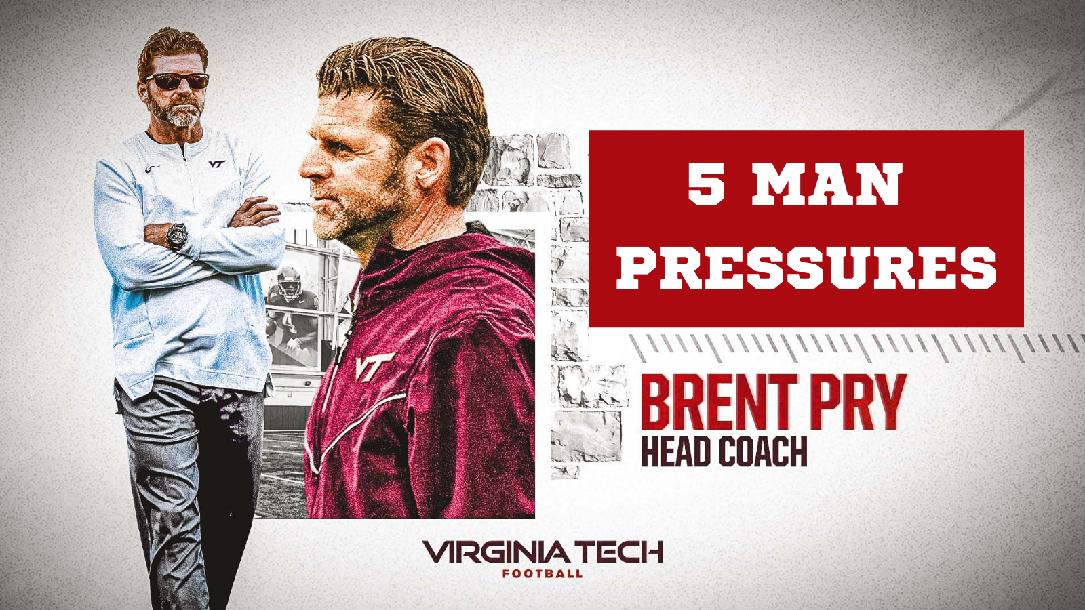 What has made Penn State a top defensive team? It's simple, their use of the 5 Man Pressure has landed them amongst the top ranks of the collegiate level. Penn State is a blitz first team and they've used pressure with high success. Now Coach Pry brings his defensive knowledge to Virginia Tech as their new head coach.

What is Pressure Defense?

Pressure defense is a strategy implemented by Defensive coordinators where linebackers and defensive backs play essentially on the line of scrimmage resulting in players often rushing the the quarterback.

There are a variety of zone pressure coverages as well as Man Pressure. In order to implement this strategy, you must understand the concept of the blitz. It's a five-man pressure that utilizes an edge blitz by the linebackers and simple line movement. Each pressure within this front has a name and is different to one another because of its assignments. 5 Man Pressures are great on early downs because they are usually gap sound.

Using the 5 Man Pressure correctly can immensely upgrade your defense and give you an advantage over opposing teams. Learn from one of the best.

VT Head Coach Brent Pry teaches the 5 man pressures. He breaks down in great depth the use of the weak and strong zone pressures. In addition, Pry details his use of the Man Pressure from the boundary and its various packages, giving you everything you need to perfect the blitz.

Proceeds from the purchase of this course benefit Lauren's First and Goal Foundation.

Brent Pry is the current Head Coach of Virginia Tech.

A Pennsylvanis native, Penn State Coach Brent Pry finished his 30th year coaching in 2021. Pry has helped each program hes coached to successs, including 14 bowl appearances, with top 25 finishes in total defense. He played an instrumental role in working with top 10 defenses at Penn State, Vanderbilt, Virginia Tech, Georgia Southern and Western Carolina. In 2020, Penn State ranked third in the Big Ten in total Defense and second in passing defense. The Nittany Lions earned nine All-Big Ten Honors on defense in 2020. Penn State had 10 All-Big Ten selections on defense in 2019.

Pry, who was a 2017 Broyles Award nominee for top assistant coach in the country, developed a dominant defense that finished in the top 25 in the FBS in scoring defense. In his first season as defensive coordinator, Pry helped the Nittany Lions to the 2016 Big Ten Championship. In 2014, Pry was a finalist for Football Scoop's Linebackers Coach of the Year. Over his three decade coaching career, Pry has coached 20+ Prominent players including a Two-Time Superbowl Champion with the Pittsburgh Steelers and future Hall of Famer Ike Taylor.