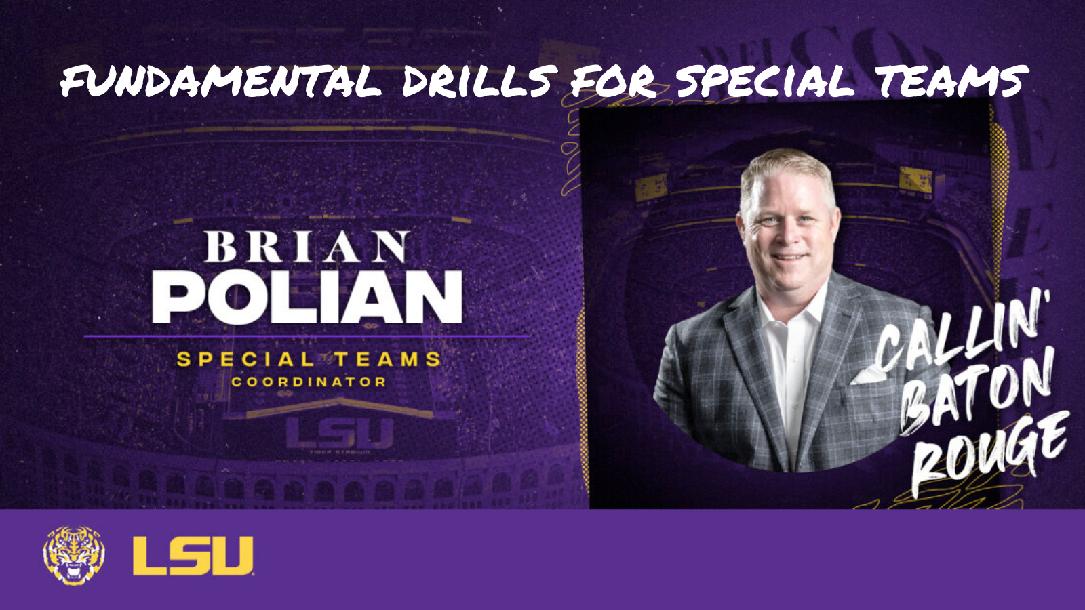 Special Teams serve an important role in a football team. They have the responsibility to set both the offense and defense up by winning field position. Both offensive and defensive players have their separate roles on special team units. It is their duty to maintain good field position for their offense in addition to giving the opposing team the worst possible field position, thus making it harder for them to score. Special teams performance, and especially punt performance can highly impact team success.

What are the fundamental drills?

They are the root foundation of effective special team players. It's the basics executed with a better understanding. For any team there should be separate drills for each kick off coverage and punt teams as well as the punt return and kickoff return teams. Beginning with footwork, strategy and execution, fundamental drills such as the Stick-dip-replace can elevate a player's effectiveness. Drills as such help players get off the line, stick the defender, dip on the seams and replace the defender behind him, giving you an opportunity to make an impactful play.

If you’re ready to elevate your special teams, this is what you’ve been looking for. Introducing Notre Dames’ Special Teams Coordinator Brian Polian!

Coach Polian's focus in this course is covering punts and kicks, and he shares the drills that they use to prepare the Fighting Irish like the bully drill, slingshot, blender drill, spread the net, and more.  He illustrates the drills in practice and shows the techniques being used on game film.

Simply click the ‘Book This Course’ button at the top right of this page, place your order, and you’ll immediately be logged into the training with full access. You’ll hit the ground running and begin improving your special teams today!

Brian Polian was named the Special Teams Coordinator at Louisana State University (LSU). He was with the Irish as the special teams coordinator since 2017. Spent the last four years as the head coach at Nevada (2013-16). Guided Nevada to 22 wins, 26 individual All-Mountain West honors and unprecedented academic honors. Helped nine student-athletes earn 2014 All-Mountain West honors, including Cody Fajardo, who became just the second player in NCAA history to pass for 9,000 yards and rush for 3,000 yards in a career. Nevada used a lethal ground-and-pound offense in ‘15, as James Butler and Don Jackson each eclipsed 1,000 yards rushing (the Wolf Pack were one of just three teams in the nation with a pair of 1,000-yard rushers).

Teaching Your Skill Players The Fundamentals of Catching Punts (Give Your Returners The Tools To Change The Field Position) by Bobby Acosta
Views: 2206
FREE