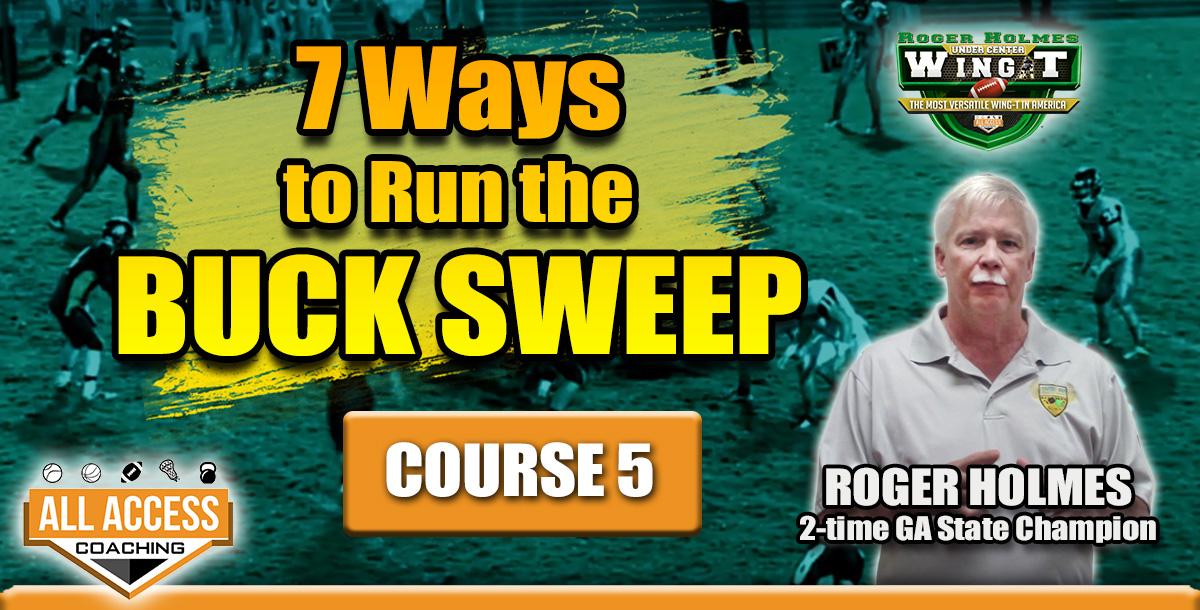 Want all of Roger Holmes most popular courses at a DEEP discount?

Roger Holmes has won 231 games in Georgia and Tennessee

This course goes into amazing detail.

This is not just basic Buck Sweep that you see all over the internet.   THIS IS BUCK SWEEP ON STEROIDS !!!

How did Coach Holmes win the 2019 GEORGIA STATE TITLE while only throwing 2 passes the entire game?

How did Coach Holmes team RUSH for over 700 yards in one game and led the entire state, all classifications in rushing with 6,200 yards?

BY HAVING A POWERFUL RUNNING ATTACK THAT HAS ANSWERS FOR EVERY DEFENSIVE ADJUSTMENT!!

How many times have you heard a defensive coordinator say:

Don't you think that every defensive coordinator in Georgia (where coaches don't teach but coach all day) tried to run every defense to stop Coach Holmes rushing machine?

Obviously none of it worked.

Because Coach Holmes runs a SYSTEM that has answers.

Coach Holmes can pull 2 Guards, 1 Guard, or even a tackle on this play.

He will influence you with false pulls and pass sets if your Linebackers read guards or your D-Line chase pullers.

This 50-minute course takes you from Whiteboard to Practice Field to Game Field.

Coach Holmes has been speaking at Glazier clinics all over the country for past 5 years and runs the Southeast Wing T clinic in Georgia every March.

Buck Sweep is a GREAT football play. And Holmes makes sure that the DC can't just "read guards" to stop it. The game film is ridiculous going against really good Georgia defenses. I was really impressed when Holmes pointed out future D-1 and NFL players who couldn't stop this play

I though I knew how to run Buck Sweep...been running it for years. But Coach Holmes is on a completely different level. He literally has an answer to anything the Defense does to stop Buck Sweep. I will probably watch this course several more times.

Thank you coach! Great stuff. Awesome resource for anyone who is running the wing t no matter how long you've been doing it.

Outstanding information, organization, and depth of instruction. As a head coach I appreciate the detail Coach Holmes delivers

Coach Holmes does a phenomenal job going over every detail of the buck sweep. No stone is left UN-turned, and if you're implementing the buck sweep or the Wing-T I can assure you this is the best system out their.

Great course! Recomend it for all wingt coaches whether new or old.

Coach Roger Holmes is amazing on this course.He leaves no stone unturned And then determine which he teaches is why he’s a two-time state champion. I felt like Luke Skywalker Getting a Jedi lesson from Yoda himself.

Coach Holmes has brought variation to the buck sweep. Multiple blocking schemes to help attack different fronts you might encounter. I love all the small coaching points he includes. This will help us run the buck sweep better and more effective.

Good course that speaks to what coaching truly is. Be good at what you do and make adjustments that allow the kids to play fast and play well.

Excellent breakdown of the buck sweep in the traditional Wing-T Offense. Guarantee everyone will get something from the presentation.

There isn't a better man to run the Buck Sweep (or under center Wing-T in general) from than Coach Holmes. If you plan to make Buck Sweep a staple in your offense, you need to watch this presentation.