Friday Night Lights - Practice, Preparation, and Planning to Build a Year Round Program 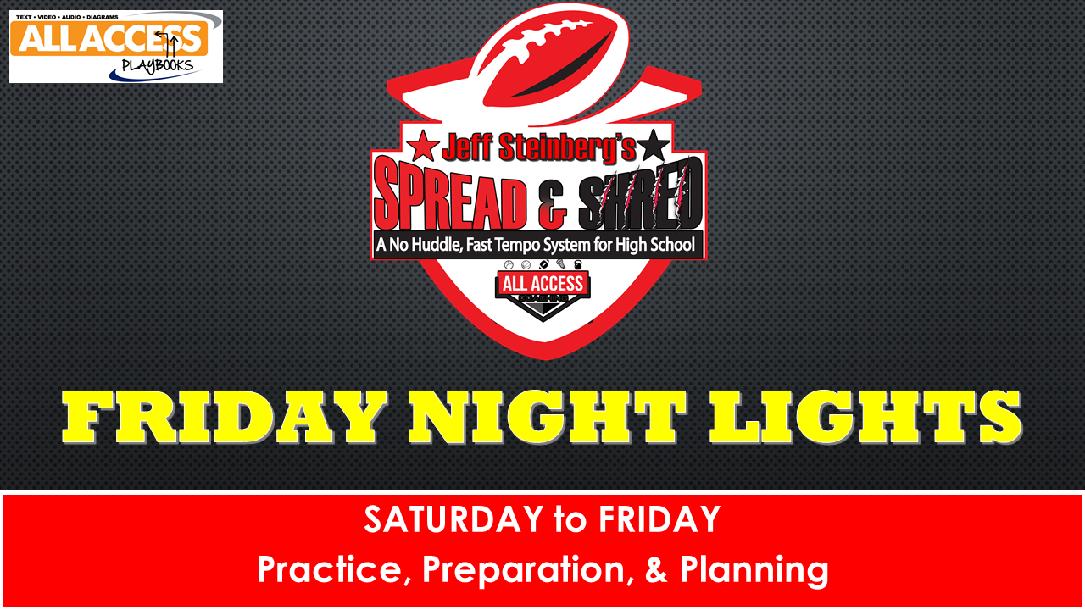 HOW DO YOU HIRE COACHES?  HOW DO THEY HELP WITH HUDL?  WHO DOES THE SCOUTING REPORTS?

WHEN DO YOU LIFT?  WHEN DO THEY WATCH FILM?

DO YOU HAVE GOAL BOARDS POSTED IN THE LOCKER ROOM?

HOW DO YOU WRITE YOUR PRACTICE SCHEDULE?  CAN YOU GAIN 10 MINUTES BY NOT STRETCHING?

LEARN HOW TO PRACTICE REALLY FAST.  STEINBERG WILL GET 100 REPS IN 10 MINUTE PERIOD.  FIND OUT HOW

Every program has the same limited amount of time. Coach Steinberg goes through his practice schedule and explains how he gets the most out of every minute during game week preparations.  In addition, you will learn how to:

--> How to recruit, interview, and train your assistant coaches.

--> Steinberg takes you through in great detail how his staff scouts the opponent on Saturday and runs a coaching meeting on Sunday,

--> 10 Things Must Find Out About Opponent

--> How to implement the GamePlan during the Week

--> Minute by minute schedule of what players do all week, from lifting to watching film to practice on the field

--> Shows you actual practice plans for every day of the week. They are in the Powerpoint that comes with this video.

--> Shares his offensive call sheet to help you call the best play for each game situation.

This video is 43 minutes long and includes a 44-slide powerpoint.

Coach Steinberg has won over 160 games and has TWO Southern Section Championship, a section that has over 600 teams.  In 2018 he accepted the head coaching job in his hometown at Beaumont High School.

Steinberg compiled a 33-8 record in three seasons at Rancho Verde, and the program increased its win total each year. The Mustangs went undefeated in the Inland Valley League title in each of Steinberg’s three seasons at the helm and reached the CIF-SS semifinals in 2015 and 2016 and won the Division 3 title this past season.

He joined RVHS after a stint at Corona Santiago, where he was from 2009-2014 and only the 3rd Head Coach in the history of the school.  He spent six seasons battling nationally ranked Corona Centennial, Norco in one of the toughest divisions in all of California. Steinberg compiled a 34-32 record with the Sharks and made the playoffs in 5 of his 6 seasons in Corona.

During Coach Steinberg’s 6 seasons at Santiago High School he was able to assist over 20 athletes in gaining athletic scholarships in both NCAA & NAIA schools across the country.  In 2011 Jeff Steinberg went over the century mark for career wins as a head coach in the state of California (110-62 career record).

Arriving at A.B. Miller High School in 2006, a similar program of excellence on and off the field was implemented. In two years he led the Rebels to their first Citrus Belt League Championship. Jeff implemented his spread no huddle offense at A.B. Miller High School which saw the Rebels average over 400 yards of offense per game & 36 points per game during the 2007 season.  Quarterback A.J. Springer broke every passing record at the school & led the county in several categories namely total yards per game (330) and passing percentage (70%).  He was among the top 5 in the state for total yards offense.  During the 2008 season, with a 1st year Varsity QB the Rebels had the most wins in the history of the school going 11-1

He had the opportunity to coach Parade All American Anthony Celestine who broke the state record for receiving in 2003 (2053 Yards), State Passing Leader, Quarterback Karsten Sween in 2004 (4,345 yards passing/ 46 TD passes/ 7 INT’s) and Southern Section Receiving Leader Hayo Carpenter in 2005 (111 Receptions, 1780 Yards).  Jeff was honored as the Desert Sky League Coach of the Year in 2003 & 2005.  He was CIF Southern Section Coach of the Year in 2005.  Additionally, he was the Sierra Sands Unified School District Employee of the Year at Burroughs for the 2003/04 school year.  During 2005 Coach Steinberg was honored by the Ridgecrest Chamber of Commerce as Volunteer of the Year primarily for his efforts in establishing a peer mentor program called the Burro Buddies (as featured in the L.A. Times on April 10/05).

At each of his schools, Coach Steinberg implemented a hurry-up no huddle spread offense that saw tremendous results.  Jeff has been able to revitalize 5 different programs to lead them to 14 playoff appearances.  Additionally Coach Steinberg’s teams have earned 8 league titles, 3 quarterfinal appearances (01, 07, 08), two semifinal appearances (04, 15), a California Interscholastic Federation Final in 2003 and California Interscholastic Federation Championship in 2005 and 2017.

This is the most detailed video I have ever watched. Not a bunch of philosophy. Coach Steinberg gives a ton of information that I can put into my program. I love the closeups of his goal boards and practice plans. And I am definitely going to use his outline for what he makes his assistant coaches do in regards to breaking down film on HUDL.

Coach Steinberg is one of the best in So Cal. He does a tremendous job in this course taking coaches through an entire week of practice, prep and planning. He is a very detail oriented coach, and that most definitely comes through in this course. I've been a head coach for 8 years, I definitely got some great insights and nuggets from this course! Thanks Coach!

Loved the course. It is exactly what I am trying to do with my program and gave me some good ideas as to how to get where I want to be.

You just booked "Friday Night Lights - Practice, Preparation, and Planning to Build a Year Round Program"