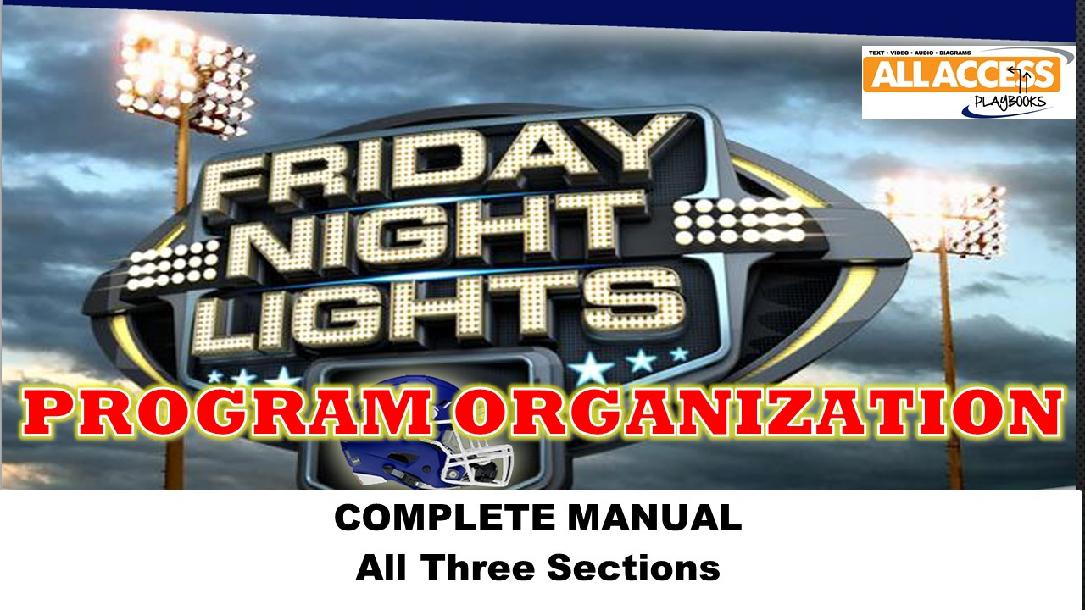 If you bought one of the 3 sections, use the coupon code that was in those courses to get this manual for only $10.

This 190-page manual is not a bunch of philosophy.  Every page shows you exactly how Steinberg & Stewart implements programs and deals with problems in a high school program.

Steinberg extensively covers how he includes PARENTS in his program and Stewart shares how he handles COMMUNITY, ALUMNI, BAND, CHEER, YOUTH, and SOCIAL MEDIA.

See Coach Steinberg's PERFORMANCE PYRAMID and how he motivates today's athlete.   Both Steinberg and Stewart divide their teams into smaller ACCOUNTABILITY groups and use weekly THEMES.  Over 20 ideas for motivation along with Stewart's TEAM BONDING trips.

Steinberg explains how his players set Season and Weely GOALS.   Both coaches include their EXPECTATION, TEAM RULES, and Steinberg's "COUGAR WAY".   Both coaches share their End-of-the-Season EVALUATION sheets that they use when they do exit interviews.

See how both coaches teach CHARACTER and LEADERSHIP during the spring.  They also outline how they work on players GRADES all year long, not just during the season.  Stewart only lost one player to grades during his 5-year stretch at Porterville, a program with over 150 players.   ADOPT-A-TEACHER and TEACHER-OF-THE-WEEK programs.

Steinberg has sent many, many players off to colleges, including a Quarterback to Alabama.  There 15 pages dedicated to how Steinberg prepares his athletes for the next level.

The COACHES SECTION starts off defining what Steinberg does as HEAD COACH.  It shows month-by-month all the things that Steinberg accomplishes.   He then describes in great detail all the jobs that his ASSISTANT COACHES will do in the off-season and during the season.   This is broken up by Varsity, JV, Freshman, and Volunteer support staff.

He also breaks down every coaches assignments each day at PRACTICE and SCOUTING the opponent.   See Steinberg's forms that he uses to EVALUATE his coaches at end of the season.

Six pages are dedicated to explaining why Steinberg is know for running very fast, high-intensity practices.  You also get his DRILL TEACHING PROGRESSION for every postion.

Twenty-one pages show what Steinberg does in and out of the WEIGHT ROOM.  All of his workouts for the entire year are detailed, along with speed and agility training.  You also get the NUTRITION handout that he hands his players.

Coaching the Quarterback Mesh: A Complete System for Teaching Quarterbacks to Run Any Option Play by David Weitz
Views: 4272
$10