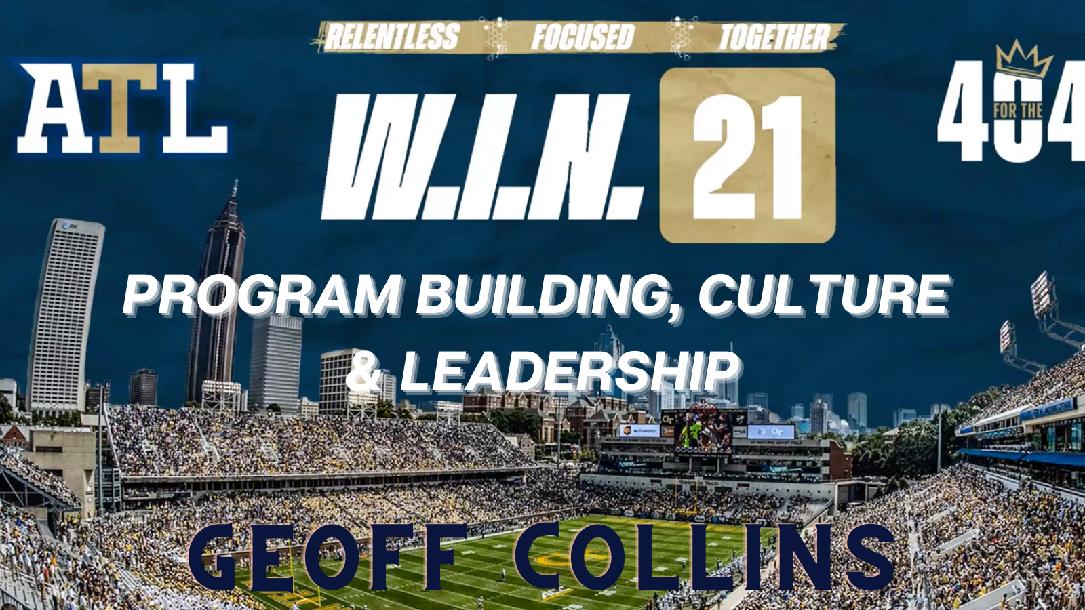 Georgia Tech Head Football Coach Geoff Collins uses motivational quotes and personal past experiences to break down the importance of program development, character building, and the emphasis on invisioning success.

Collins' insight into becoming a major football powerhouse from different offseason and academic requirements make this a valuable course for coaches, players, and scouts.

The Future of Georgia Tech Football
1 The Future of Atlanta's Collegiate Football Program 5:13
Care about your Players
2 Either love your players, or get out of coaching 2:23
Culture and Energy
3 Culture Built on Effort 18:53 4 Bring the Energy 2:33
Special Teams
5 Special Teams is the 1st Priority 2:00
Athletes in the Classroom
6 Academics and Brotherhood 9:49

Prior to taking the reins at Georgia Tech, Collins put together the most successful first two seasons by a head coach in Temple’s 121-year football history. Collins compiled 15 wins and led Temple to two bowl games in his two seasons with the Owls, which are both school records for a coach in his first two campaigns at TU.

In his first season at Temple, Collins led the Owls a 28-3 win over Florida International in the 2017 Gasparilla Bowl, which was good for only the third bowl victory in school history and its first since 2011.

He coached the Owls to an 8-4 record and 7-1 mark in the American Athletic Conference in 2018, with Temple’s only conference defeat coming at No. 8-ranked and undefeated UCF. The 8-4 campaign earned Temple a berth in the Independence Bowl.

He is the only coach to ever be nominated for the Broyles Award, given to college football’s top assistant coach, at three different schools (FIU – 2010, Mississippi State – 2014 and Florida – 2015).

Collins’ 27-year career also includes a pair of prior stints at Georgia Tech. He first came to The Flats as a graduate assistant (1999-2000), then tight ends coach (2001) under head coach George O’Leary from 1999-2001, followed by a year as director of player personnel under head coach Chan Gailey in 2006.