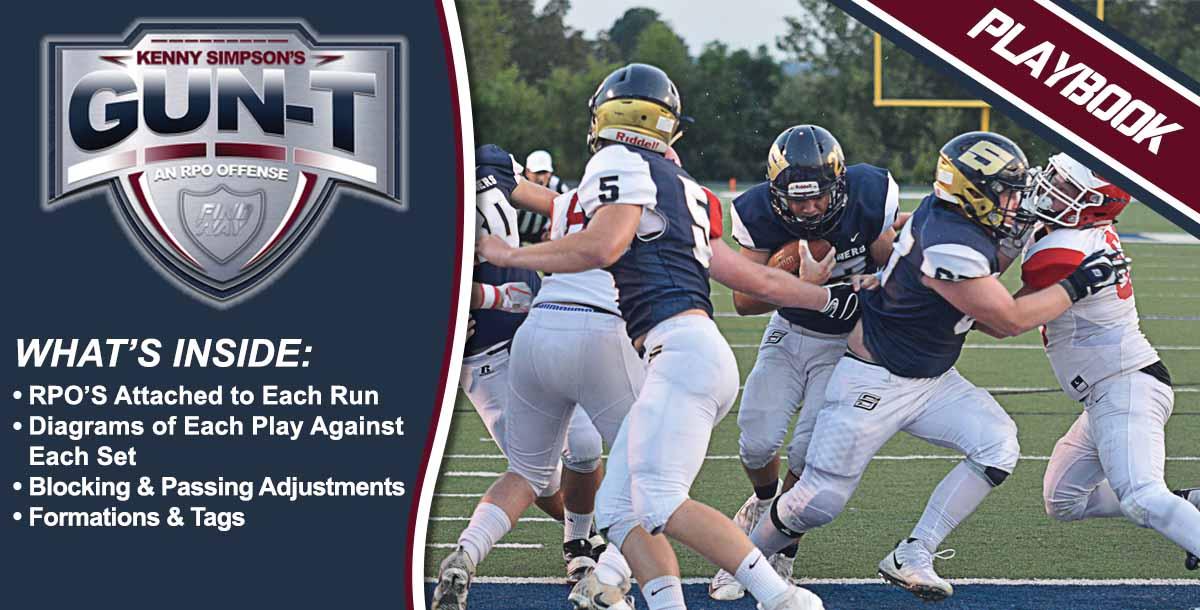 This is the digital playbook for the Gun T RPO offensive system.  This is not downloadable, it must be read on coachtube.  If you would like a printable copy you will need to order from here:

This book will cover -

Shifts and motions - Dress up your offense with very easy to learn motions/shifts.

All base runs vs. any front - Each play is drawn up against multiple fronts.

Screen game and tags - Running screens to any player on the field with simple terms.  Clear and easy to attach to any run.

Jet motion run and pass game - Use the SAME BLOCKING SCHEME FOR 3 RUN PLAYS.  Use Jet motion to dress up the passing game as well.

Heavy package - Using this package in the Gun T RPO System has been a 90% success rate on 3rd/4th and short the past 3+ systems and has accounted for over 30 Touchdowns.

150-pages going in depth on the Gun T RPO System

Quotes from Coaches that have bought courses from the Gun T RPO System:

"Coach Simpson's Gun T Offensive Overview is an excellent offensive resource. This course provides the foundation of Coach Simpson’s offensive philosophy. Coach believes in the monikers that “Less is More” and the “Rule of 3”, which both were evident in the explanation of the offense. His explanations were clear and concise, and the presentations were easy to follow." - Todd Knipp

"This is absolutely amazing. Coach Simpson does an excellent job of explaining his system. Whether you're a young coach or an experienced coach this is must see. You can easily see why he is a successful coach. His detailed organization is on point and I cannot wait to learn more from Coach Simpson." - Mike Kloes

"I've been following coach Simpson for a while now and it's very clear to me that even though I may not be a HC, we have similar philosophies. If you are a Wing T guy looking for ways to "Modernize" your offense, or a Spread guy looking for an effective and efficient run game this is the offense you should be looking at!" - Coach Sheffer

"The course by Coach Simpson was quite helpful. As the new Head Coach of a small school - the Gun T system is going to help us be successful right away. Being a spread coach for the last 8-9 years, this system easily blends the best of both worlds of spread and wing-." -Mike Wilson

"Coach Simpson's Gun-T Offense is dynamic and efficient. This course gets into the foundation of building blocks of the Gun-T offense and what you are trying to do offensively to be as successful as possible." - Austin Pink

"Amazing detail on numerous variations of attaching RPO's to your Bucksweep. Keeps it simple yet extremely informative. Great Job Coach Simpson, you made me a believer! Highly recommended!" - Mike Turso

"Coach Simpson does an awesome job explaining his system, and he does it a way that people like myself who are not familiar with RPOs can understand!" - Coach Coleman

Kenny is awesome! Thanks Coach!!!