Introduction to The Triple Gun Offense 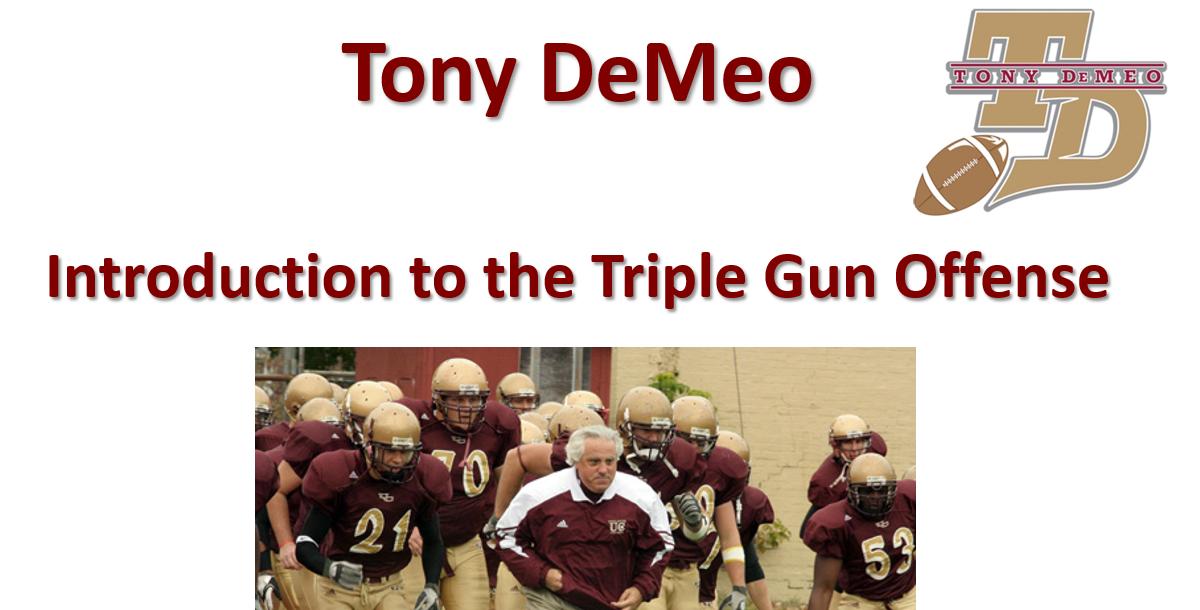 "Coach DeMeo's offensive system is simple, unique, and fun. It is one of those rare offenses where everything is built on top of the base plays or schemes & you can get the same core plays from an almost unlimited number of formations, shifts, motions, and personnel groups.”  Aaron Makekly HFC Kelly Walsh HS – Casper WY.

Produced in collaboration with Option Central in its Chalk Talk format, each of the 17 plays in this course features actual game video footage and a "chalkboard-style" play illustration, both with narration and telestration.  Also included are live clinic - style introductions to the Quick Game and Play Action pass sections of the course.

Watch, listen and learn from one of the great teachers of Option Football.

Coach Demeo's videos coupled with in depth explanations via play diagrams make for a comprehensive education regarding the gun triple. Coach Demeo is a wealth of knowledge with answers that always ensure the offense is right. This course will exceed your expectations.

This is a great introduction into a very simple but very effective offense. Coach DeMeo communicates and illustrates everything you would need to operate this great offense from its potent core run to its answer plays to protect the core run. The beauty to this offense is the ability to pass the ball effectively and efficiently through Coach DeMeo’s quick game (my favorite and a very versatile and complete package) and play action pass. If your a fan of the triple option offense and would love to be able to throw the ball effectively and efficiently then this will be a treat for you.

I have personally known Coach DeMeo for many many years --- the original WISHBONE seasons of the early 1970s !!! He has created / adapted / evolved throughout his career and beyond. In his GUN TRIPLE OPTION --- he explains his concepts in a unique way --- concise / meaningful / most importantly in a way that the players can understand. As a QB, you do this UNLESS !!! The thoroughness of his concepts makes it very easy to understand the WHYS of what he is trying to explain !!! I highly recommend the GUN TRIPLE course to those coaches out there who are searching to develop an offensive philosophy and concepts. Coach Bob Bridge (an Indiana HS coach of 50+ years)

Great intro to the gun triple & some complimentary plays. Coach DeMeo's books & website have more detailed explanations, but this course is a great starting point if you are unfamiliar with his offense.

You just booked "Introduction to The Triple Gun Offense "