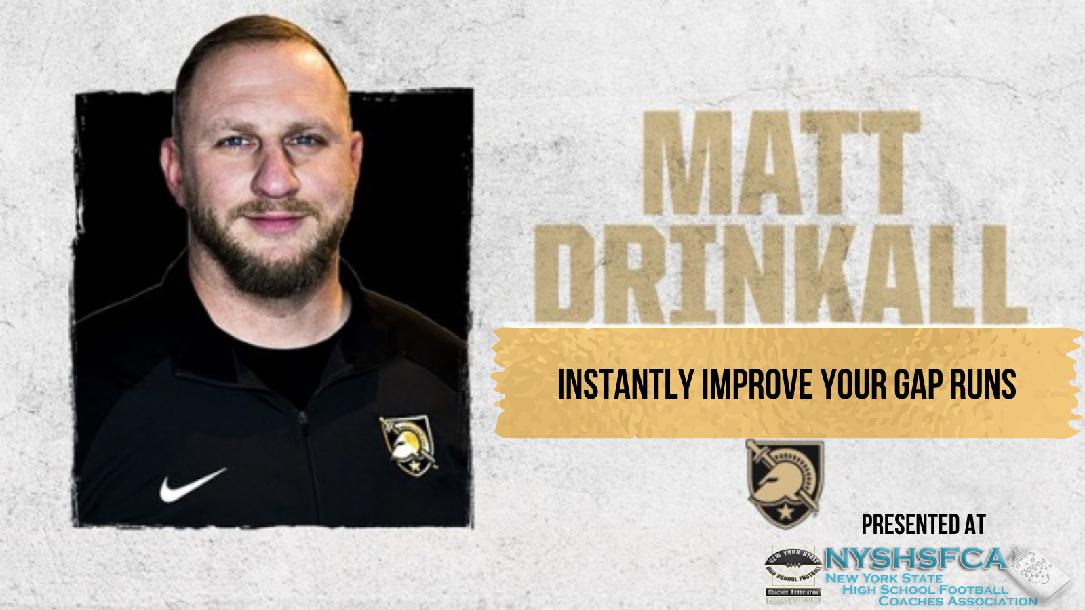 Coach Matt Drinkall talks about how to teach and improve your gap runs to attack defenses.

Matt Drinkall was added to the Army West Point football staff in February 2019. He currently serves as the tight ends coach after a year stint as the offensive quality control coach. He came to the Banks of the Hudson after a very successful five-year stint as the head coach at Kansas Wesleyan where the Coyotes were 42-17, including a 37-12 slate against KCAC opponents. His last four teams won 40 games (40-8) during the best four-year run in school history. He departed holding the fourth-highest win total in program history as well. The culmination of that was in 2018 when Wesleyan won its first conference championship since 2002 after going 10-0 and advancing to the semifinals of the NAIA National Championship. The Coyotes posted a program-best 13-1 record and shattered virtually every school and numerous KCAC and NAIA records in the process during their historic season. In 2017, the Coyotes continued their renewed success under Drinkall by posting an 8-3 overall mark and a 7-2 record in the KCAC. He coached a pair of AFCA and Associated Press NAIA All-Americans in 2017 in Trenton Poe-Evans and Garrett Updegraft. Wesleyan's offense ranked No. 6 in the NAIA in sacks allowed, No. 20 in scoring offense, and No. 24 in total offense. Senior Tyler Welch led the NAIA in kickoff return yards, Updegraft ranked third in the NAIA in tackles per game and Poe-Evans led all NAIA tight ends in receiving yards, touchdowns, receptions and receptions per game. In 2016, the Coyotes went 9-2 overall and 7-2 in conference play, while also recording back-to-back nine-win seasons for the first time in school history. Wesleyan reached the No. 10 spot in the NAIA Top 25 poll during the season, matching the highest-ever ranking for the Coyotes since the NAIA began recording weekly poll rankings in 1999. The team enjoyed a 5-0 record at Bissell Field at the Graves Family Sports Complex, remaining unbeaten in the facility since it opened in 2015.