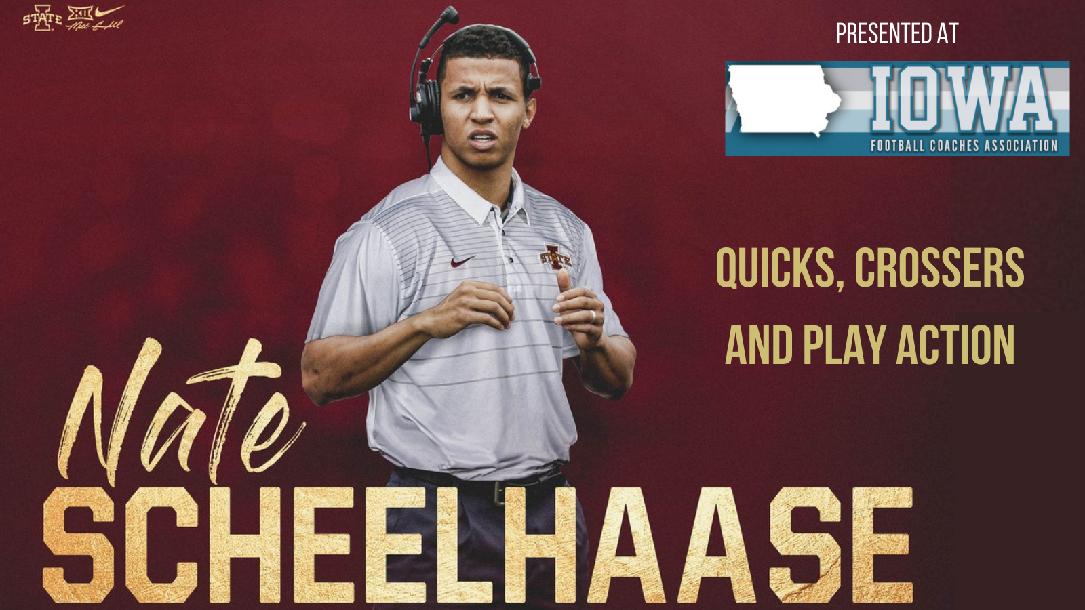 Coach Nate Scheelhaase talks us through Iowo States Passing Game and part of the run game that is used to attack defenses.

Nate Scheelhaase is in his fourth season on the Iowa State football staff, working primarily with the Cyclone running backs and wide receivers. He enters his first season as Running Game Coordinator while assisting the running backs and wide receivers. In 2019, Scheelhaase was listed in 247Sports' "30Under30" as one of the top rising stars in the profession. The Cyclones have appeared in three bowl games, made yearly appearances in the national rankings and recorded 24 victories in Scheelhaase’s three seasons in Ames. The 2020 season was historic in many ways. Iowa State finished the regular season in first place in the Big 12 standings, made the Big 12 Championship game and qualified for a New Year’s Six bowl for the first time in school history. The Cyclones capped off the season with a 34-17 win over Oregon in the PlayStation Fiesta Bowl. ISU’s eight conferences wins and nine overall wins eclipsed or tied school records, and the Cyclones earned their highest ranking in school history during the season (#6) and postseason (#9). With Scheelhaase on staff, the Cyclone offense has set numerous school records: total offense (444.3 in 2019), touchdowns (53 in 2019), yards per play (6.45 in 2019) and rushing touchdowns (31 in 2020). The Cyclone offense has thrived in the last two seasons, as ISU recorded two of the top-three scoring offensive seasons (2019, 32.2, 3rd; 2020, 32.9, 2nd) and total offensive seasons (2019, 444.3, 1st; 2020, 436.3, 3rd) in the history of the program.