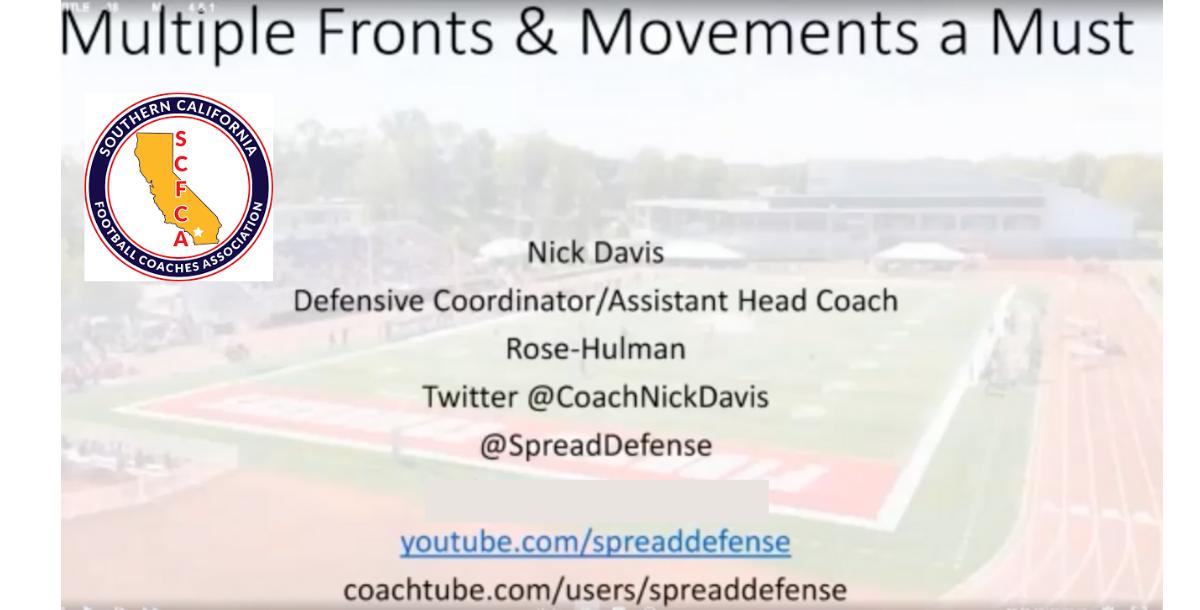 Do you want to learn a spread defense and stop your opponents in their tracks? Well, you've come to the right place! In this course, Coach Nick Davis reveals his spread defense, multiple fronts, families, and stunts you need to take on any kind of offense. He details out a defensive overview and then shows off game film cutups to show off how the spread defense truly works.

He begins speaking on how the game has changed showing off that offenses have gotten better. 10 years ago the top offense wouldn't even be in the top 10 from 2020 in regards to yards per play. This means that it is getting harder to play defense. As a coach, you need to be doing what you can and switching up your defense to give yourself the best competitive advantage you can get on the defensive side of the ball. He also explains that it is important to track record sacks and TFLs. This will allow you to see what is working for your team from year to year.

Coach Davis breaks down the defense even more with how he calls the plays in, defensive player identification, and how he sets the front. These are the little things that you need to be on the same page with your team to truly have success. You do not want someone on the field who does not know what they are doing. This course will teach you how to make the proper calls and deny the offense.

Then, Coach Davis moves into his Even Front & Odd Front Cutups. These cutups help bring everything together. They show off how the defense works, different schemes, blitzing packages, pass rush techniques, and much more! With this course, you will fully see how successful your team can be by using multiple fronts and movements.

If you are a coach who wants to make the game harder for your offense on the field, and in preparation to play against you, then this course is a must!

Coach Nick Davis is starting his 10th season at Rose-Hulman Institute in 2021. This will mark his 7th year as the Defensive Coordinator for the team. Over the last 4 years, he has led one of the top defensive squads in the nation. His novelty Spread Defense even led the Heartland Collegiate Athletic Conference in total defense and scoring defense in 2015 and 2016. In both 2018 and 2019, he had 8 first-team all-conference players. He also serves as the Strength and Conditioning Coach and has a USA Weighting certification.

Prior to coaching at Rose-Hulman, Coach Davis served on the defensive side of the ball at Ottawa University in Kansas where he coached the Defensive Backs and Linebackers.