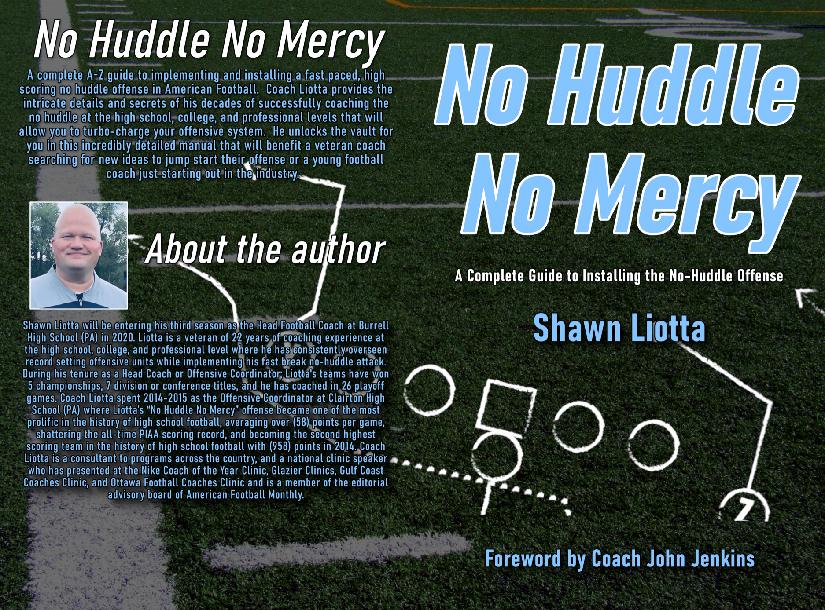 No Huddle No Mercy Passing Game Manual - New for 2021

This course will be updated with additional webinars, updates,  and cutups periodically throughout the life of the product.  These updates will be yours for FREE for the life of the course.

AND.....  You will receive the e-book version of Coach Liotta's best selling book released in February 2020- No Huddle No Mercy

"Coach Shawn Liotta's book, No Huddle No Mercy is a must read for anyone wanting to play fast.  His attention to detail is fabulous and will be very helpful to any coaches offense."

- Hal Mumme, The Godfather of the Air Raid Offense

"A must read, Coach Shawn Liotta is brilliant.  Great ideas and drills to run within your offense.  Highly recommend this book."

DISCLAIMER:  This is not a downloadable product.  You cannot download or print this book from the CoachTube website.  If you want a printed, bound book, you must order off www.nohuddlenomercy.com .   This hard copy book will ONLY be shipped to you if you order off that website.  The 191 page book listed here on CoachTube is only viewable as a pdf product.

"No Huddle No Mercy"

A complete A-Z guide to implementing and installing a fast paced, high scoring no huddle offense in American Football.  Coach Liotta provides the intricate details and secrets of his decades of successfully coaching the no huddle at the high school, college, and professional levels that will allow you to turbo-charge your offensive system.  He unlocks the vault for you in this incredibly detailed manual that will benefit a veteran coach searching for new ideas to jump start their offense or a young football coach just starting out in the industry.

Shawn Liotta will be entering his third season as the Head Football Coach at Burrell High School in 2020.  Liotta brings 20 plus years of coaching experience at the high school, college, and professional level, where he has coached teams to 5 championships, 7 division or conference titles, and has coached in 26 playoff games during his career. Coach Liotta spent 2014-2015 as the Offensive Coordinator at Clairton High School, where the Bears captured two WPIAL Titles and compiled a
(28-2) record. Liotta’s “No Huddle No Mercy” offense became one of the most prolific in the history of high school football, averaging over (58) points per game, breaking the all-time PIAA scoring record, and becoming the second highest scoring team in the history of high school football with (958) points in 2014.

In addition to his tenure at Clairton, Liotta has served as an assistant at Springdale High School, Yough High School, Saltsburg Area, and McKeesport High School in addition to serving as the head coach at Albert Gallatin High School, Line Mountain High School and West Shamokin High School. Liotta was the running backs coach at Duquesne University in 2003 helping the Dukes capture the NCAA D1AA Mid-Major National Championship, and spent nine seasons as a head coach at the professional indoor level, most recently with the Erie Explosion, where he led his team to two league championships and was a two-time league coach of the year. Coach Liotta is a published author, consultant to programs across the country, and a national clinic speaker who has presented at the Nike Coach of the Year Clinic, Glazier Clinics, Gulf Coast Coaches Clinic, and Ottawa Football Coaches Clinic.  In addition, Liotta has served on the editorial advisory board of American Football Monthly.