Offensive Game Planning Made Easy in the Spread Offense 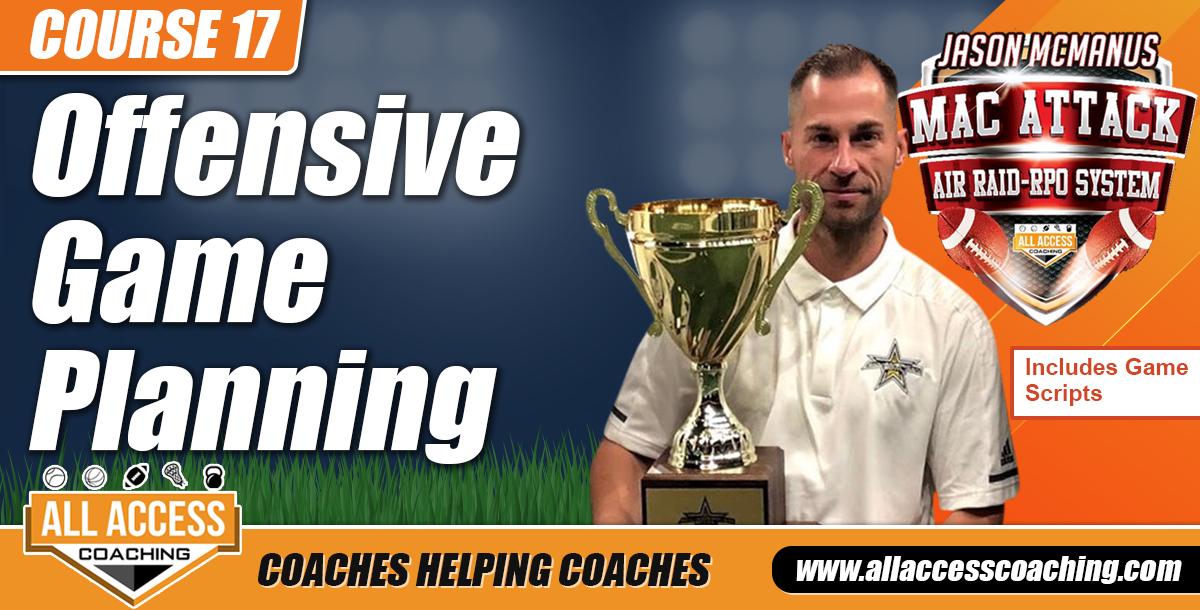 HOW TO BE ORGANIZED, BE EFFICIENT, AND IDENTIFY WHAT YOU NEED TO DO ON FRIDAY NIGHTS

Coach McManus goes into great detail on how he created his gameplans for the MacAttack offense, scoring over 700 points in a season!  He amassed 6,702 total yards - 3,639 rushing and 3,063 passing.

HOW TO SCOUT AND GAME PLAN FOR AN OPPONENT

--> Find the 1on1 matchups.  Find their weaknesses.  How will you pick up their blitzes?

--> How to decide which plays go where in the script?  Do you have a 2nd half script?

--> Which plays go in your Down & Distance boxes?  How do you decide what plays are 2nd and short, 3rd and Long, and Red Zone?

--> How do you pass protect and make sure best players get the ball?  Man Beaters?  Zone Beaters?

--> Which plays DON'T go in the game plan?  How do you eliminate plays?

--> Are you self-scouting yourself and breaking your own tendencies?

--> How does your staff cutup film on HUDL?

HOW TO MAKE YOUR GAME DAY CALL SHEET:

Coach McManus explains every box on both the front and back of his call sheet, WHICH YOU CAN DOWNLOAD and have in front of you as he explains it!

Downloadable, editable Excel sheet of what the coaches use in the pressbox to keep track of what McManus has called

1 START HERE 2 Intro 0:09
GAME PLANNING
3 1. How to Script Your Plays First and Second Half 3:26 4 2. Identify Problems and How to Attack Their Weaknesses 2:16 5 3. Making Your Cutups and What Columns to Use in HUDL 4:11 6 4. Self Scouting Your Own Offense and Creating Your Base Plan 3:26 7 5. Analyzing How Attack Defenses with Your Passing Game 2:26 8 6. Practice Efficiency and Selecting Plays for Down & Distance 2:34 9 7. Creating Your Orange and Red Zone Packages. Also Goal Line Plays 1:54 10 8. Trick Plays and 4-min Offense 1:01
GAME DAY SCRIPT
11 a) Scrips for Each Half 3:52 12 b) Organizing Your Run Plays 1:17 13 c) Organizing Your Pass Plays 0:54 14 d) Trick and Special Plays 0:57 15 e) Organizing Your Down and Distance Plays 1:59 16 f) Organizing Red Zone and Goal Line Plays 1:26 17 g) Game Day Notes and How to Make Sure Your Best Players Touch the Ball 1:17 18 Wrapup 0:06
DOWNLOADS
19 DOWNLOADABLE Editable Pressbox form to track plays called 20 VIEW ONLY: Gameday Play Sheets 21 DOWNLOADABLE Editable Depth Chart 22 DOWNLOADABLE EDITABLE EXCEL SHEET: Gameday Play Sheets (4 tabs) - Downloadable 23 Complete MacAttack Spread RPO Offensive System

Very professionally done. Call sheets are well organized and easy to find things on during a game. Great tips/insight into how the sheet is created and used.

great information for any coach

Game plan made simple. Call Sheet easy to see an find plays quickly especially if you are a hurry up no huddle team...

Coach Mac's Course is top notch. This course and all of Coach Mac's courses have been exceptionally helpful to our program and our approach.

Great ideas to incorporate into any offensive system. Coach Mac does an awesome job explaining the "why" behind his system and ideas.

Solid information that relates exactly to the description. A+

Very informative and helpful for prep week and gameday organization!

Love all of coaches videos and would highly recommend them to anyone interested in learned the spread.

I thought is very informative. I thought Coach did a great job of breaking down each detail when it came to game planning.

Scripting Field Zones, Players, Down and Distance....Game Planning is certainly the most organized approach I have ever seen!!!!

Jason McManus does a great job of explaining his how he gameplans weekly. It give you ideas on how to gameplan if you aren't quite sure what to look at it. Great stuff Coach McManus. Appreciate the help.

Love This Offense....Sampled a scaled down version of it with 5th/6th grade last year, and went undefeated. 11 year old Q in his first year completed 63% for 600 yards and 9 TD in 6 games. Running game averaged 200 YPG. Next year 7/8 grade hope to go full on MacAttack!