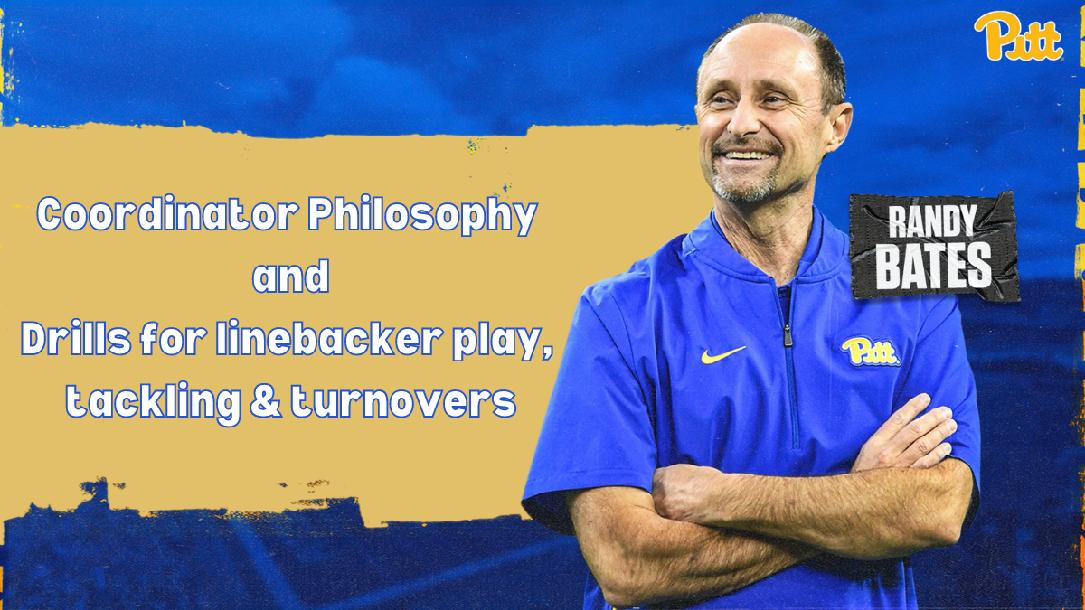 In this course, Pitt Defensive Coordinator Randy Bates shares the keys to being a successful defensive coordinator by outlining his philosophy and approach to teaching, then shbows how that applies to training linebackers through drills for tackling and turnovers.

This course gives a big picture overview and then shows how those concepts are applied.

1 Free Preview of this Course 3:38 2 Coordinator Philosophy and Linebacker Drills, Tackling and Turnovers 0:00

Follow
Randy Bates defense was an aggressive force during the 2021 Atlantic Coast Conference championship season. They displayed the ability to get to the quarterback and smother the run.
Pitt led the ACC and ranked 2nd nationally averaging  3.86 sacks per game.  Their 151 sacks over the past three seasons (2019-21) are the highest total in the nation over that period.

In the run game Pitt limited opponents to just 89.3 rushing yards per game, making them the leader in the  ACC and ranked sixth in the nation in defending the run. Pitt has finished in the nation's top 12 in rushing defense each year from 2019-21.
Bates has received national recognition as the 2020 Assistant Coach of the Year by the American Football Coaches Association (AFCA).
Bates arrived in Pittsburgh in 2018 after spending the prior 12 seasons (2006-17) coaching linebackers at Northwestern. His accomplished pupils included back-to-back All-America linebackers. Anthony Walker Jr., now a member of the Cleveland Browns, was a consensus All-Big Ten selection who earned All-America accolades from Associated Press and Sports Illustrated.