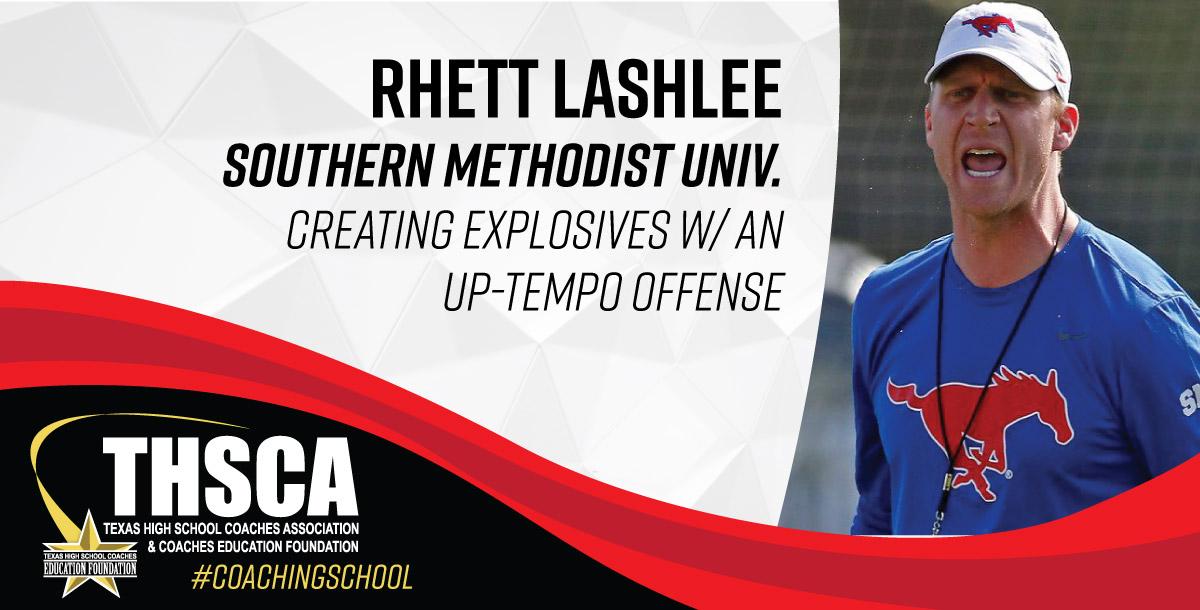 Rhett Lashlee returned to SMU as Head Football Coach after previously serving as offensive coordinator for the Mustangs for two seasons, including the record-setting 2019 campaign. Lashlee, a one-time finalist (2013) and two-time semifinalist (2019, 2020) for the Broyles Award, presented to the nation’s top assistant coach, came back to the Hilltop after two seasons as the Miami Hurricanes’ offensive coordinator and quarterback’s coach. Lashlee also has the distinction of being the only coach ever nominated for the Broyles Award four different times at four different schools (Arkansas State, Auburn, SMU, Miami). While at Miami the Hurricanes jumped to No. 32 in the FBS in total offense (from No. 98), No. 29 in passing offense (from No. 52), No. 26 in scoring offense (from No. 90), No. 17 in red zone offense (from No. 122) and No. 20 in first downs gained (from No. 84). In 2019 the Mustangs were ranked No. 3 nationally in plays per game, averaging 80.9 – a testament to Lashlee's up-tempo offensive style. SMU was one of only 34 teams in FBS to average more than six yards per play in 2019. Prior to joining SMU's staff, Lashlee served as an offensive coordinator for seven seasons, spending 2017 at UConn, 2013-16 at Auburn, 2012 at Arkansas State and 2011 at Samford. Lashlee was the offensive coordinator at Arkansas State (2012), helping the Red Wolves to a Sun Belt Championship. While at Auburn as an offensive graduate assistant during the 2009-10 seasons, Lashlee assisted Gus Malzahn with all aspects of the offense and coached the quarterbacks and slot receivers in 2010. In 2009, the Tigers finished 8-5 winning the Outback Bowl. During the 2010 season, he helped the Tigers finish 14-0, winning the SEC title and the BCS National Championship behind Heisman Trophy winning quarterback Cam Newton. Lashlee coached at Springdale (Ark.) High School in 2004-05, working with the quarterbacks and 2005 National Player of the Year Mitch Mustain. He is married to the former Lauren Lee. They have twin sons, Thomas and Hudson, and twin daughters, Rowyn and Scarlet