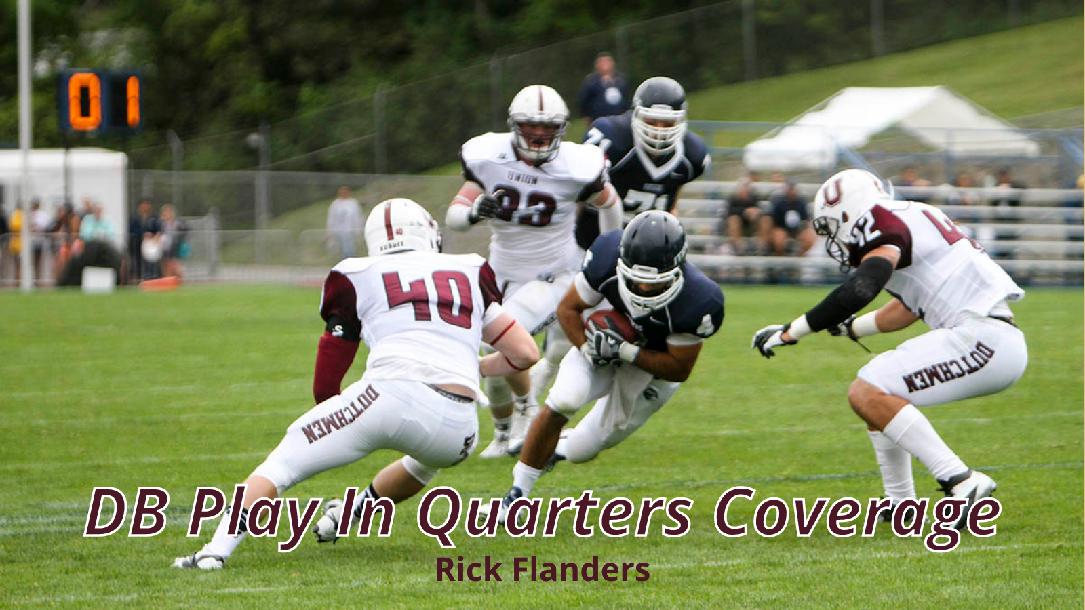 Coach Rick Flanders teaches the details of defensive back play and responsibilities in quarters coverage.

Rick Flanders completed his fourth season as the Defensive Coordinator with the Union College football team in 2019. n his four years with the Dutchmen, the Union defensive unit has produced one D3football.com All-American and three All-Region selections, five All-ECAC honorees, and 28 All-Liberty League picks. Flanders previously coached for 24 years in the Ivy League both at the University of Pennsylvania and Yale University. Flanders came to Union after 19 seasons at Yale University in various capacities. He served as the Defensive Coordinator and was promoted to Associate Head Coach in 2007 and served in that role for eight seasons. Flanders spent his first seven years focusing on defensive backs before moving on to be a linebacker coach for four seasons. Under his watch, the Yale defense was ranked No. 1 in the FCS in scoring defense during his tenure and the Bulldogs won the 1999 and 2006 Ivy League championships. Flanders previously spent five seasons as a secondary coach at the University of Pennsylvania, where he worked under former Union head coach and Athletics Hall of Famer Al Bagnoli. While there, he helped coach Penn to Ivy titles in 1993 and 1994 and his Flanders' defensive backs helped the Penn defense rank nationally in both seasons, including No. 1 in pass efficiency defense for 1994. Before heading to Philadelphia, Flanders was head coach of the undefeated 1991 Dean Junior College team and was the linebacker and special teams coach at Lafayette College from 1987 to 1990. In 1986 he was the defensive coordinator at American International College, after three seasons as linebacker and defensive back coach at SUNY Albany, where he also served as head lacrosse coach for two years.