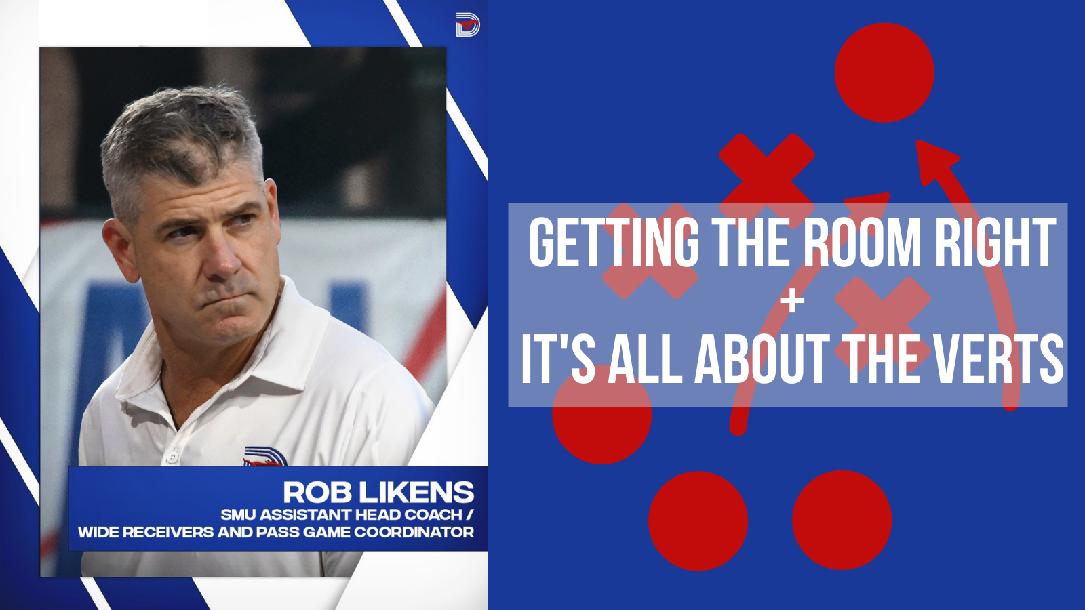 In the clinic, "WR Getting the Room Right/ It all Starts with the Verts" SMU receiver coach Rob Likens shares the keys to developing a successful wide receiver room, then goes into the details of four verticals for receivers.

Rob Likens is the Assistant Head Coach/Pass Game Coordinator and Receivers Coach accepting that position in 2022.

Rob Likens, who spent the 2018-19 seasons as offensive coordinator / quarterbacks coach at Arizona State, was introduced as the Miami Hurricanes’ wide receivers coach by head coach Manny Diaz on Feb. 7. “We are excited to welcome Rob and his family to Coral Gables,” Diaz said upon his hiring. “Rob has extensive experience with fast-paced, high-octane offenses and he can serve as a great teacher and motivator to the young men in our receivers room.” Over his 28-year coaching career Likens has been an offensive coordinator at four schools, including the past two seasons at Arizona State, where he was also the quarterbacks coach.In 2019, the Sun Devils started a true freshman quarterback, Jayden Daniels, for the first time in school history. Daniels threw for 2,943 yards with 17 touchdowns and just two interceptions, eclipsing the 300-yard passing mark on five occasions. He threw for a season-high 408 yards in ASU’s 31-28 upset over sixth-ranked Oregon. Running back Eno Benjamin rushed for 1,083 yards and 10 touchdowns as a junior, finishing his career with 15 100-yard rushing games. Wide receiver Brandon Aiyuk caught 65 passes for 1,192 yards and eight touchdowns, ranking second nationally in yards after catch (10.9). Aiyuk also ranked sixth nationally in all-purpose yards (155.8 per game). Benjamin and Aiyuk both earned first-team All-Pac-12 honors. The Sun Devils also turned the ball over just 14 times, ranking sixth in the country in turnover margin.

The Fundamentals of Coaching Receivers by Urban Meyer
Views: 19836
(11) FREE