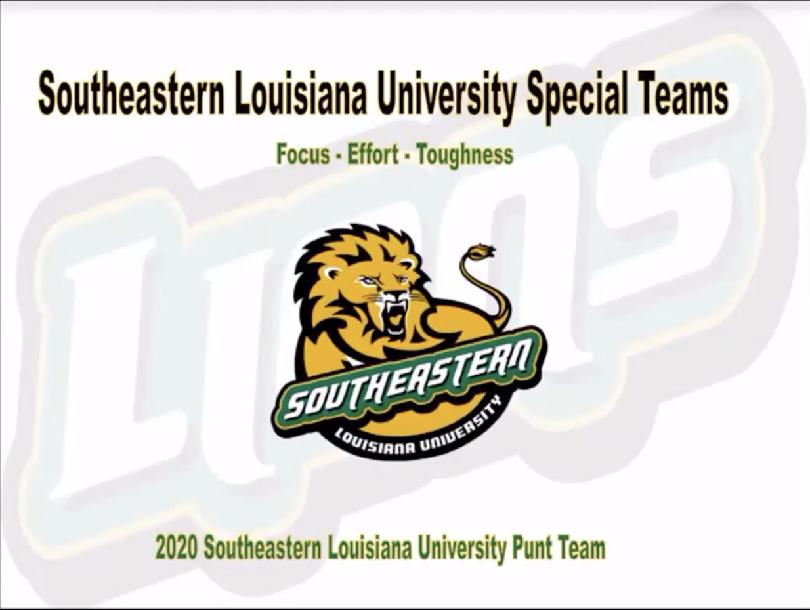 Southeastern Louisiana Special Teams Coordinator Ross Jenkins uses game and practice film to break down the importance of team drills, proper stance, and the emphasis of punt team utilizing shield techniques, separation from defenders, as well as attacking the returner at all costs.

Ross Jenkins joined the Southeastern Louisiana football coaching staff as a special teams and offensive assistant in July 2018. Prior to the 2019 season, Jenkins was elevated to special teams and recruiting coordinator, as well as working with the team’s tight ends.

Jenkins coached one of the top tight ends in school history in 2019, as senior Bransen Schwebel finished with 50 catches for 609 yards and four touchdowns on the way to earning All-Southland and All-Louisiana honors. As the special teams coordinator, Jenkins helped Devonte Williams earn All-Southland Conference honors at punt returner.

During his time at Wingate, he was also in charge of the kick return units and coached all returners. In 2017, one of his charges, BJ Muckelvene, was a second team AFCA All-American selection.

A 2010 graduate of Louisiana Tech, Jenkins was a three-time WAC Scholar-Athlete Award winner on the way to earning his bachelor’s degree in business economics. He helped Louisiana Tech to an appearance in the 2008 Independence Bowl – the program’s first in 31 years – and was named the Terry Bradshaw Offensive Player of the Year as a senior.