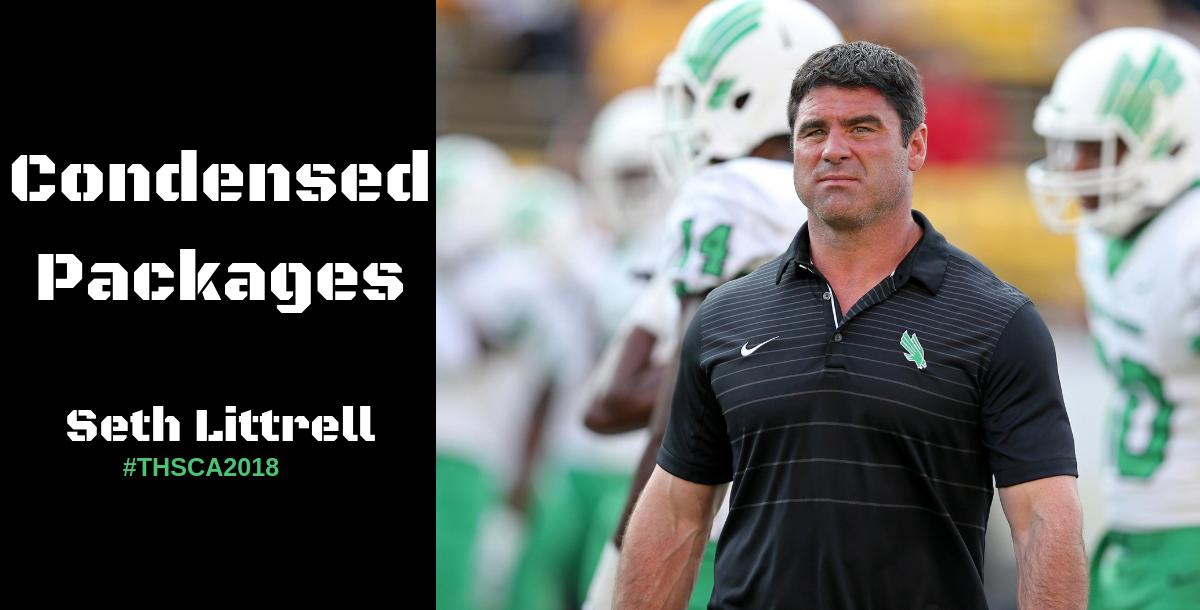 This was the talk of this year's Texas High School Coaches Association annual Coaching School. Packed with all X's and O's to outsmart your opponents!

See why his offense is putting up over 48 points a game and already upsetting SEC's Arkansas 44-17 in week 2.

Seth Littrell is in his third season at University of North Texas. The Mean Green finished 2017 9-5 with an appearance in the R+L Carriers New Orleans Bowl and set several offensive records along the way. North Texas broke single-season program records for points (497), passing TDs (32), total offense (6,366 yards), total offense per game (454.7), most plays (1,037) and most first downs (340).

The Mean Green showed marked improvement offensively again in Littrell's second season, improving their points per game average by 10.7 ppg (35.5). Sophomore QB Mason Fine also took a major leap forward in his second season with Littrell, becoming the first Mean Green signal-caller to eclipse 4,000 yards passing in a season (4,052) and the first to throw for 30 or more touchdowns (31). Fine was named Conference USA Offensive Player of the Year and was a first-team all-conference performer.

Littrell led the Mean Green to the second-best turnaround in the Football Bowl Subdivision in 2016, his first season at the helm. North Texas improved its win total by four games, finishing 5-8 on the season with a Zaxby's Heart of Dallas Bowl appearance. Littrell helped lead the Mean Green to a 9.6 points per game jump in scoring offense from it's output in 2016, which ranked 11th-best in the nation, and the 2016 defense allowed 8.7 points per game fewer than it did in 2015, which was the 13th-best turnaround in the country.

One of the brightest offensive minds in college football, Littrell came to North Texas after serving as the assistant head coach for offense and tight ends at North Carolina. At the time of his hire, the Muskogee, Oklahoma, native was the youngest coach in Conference USA and fifth youngest in the nation.

The dynamic mind of Littrell turned the North Carolina offense in 2015 into one of the nation's best, as the Tar Heels set school records for most points and touchdowns in a season. The Tar Heels won the ACC Coastal Division Championship and played in their first ACC Championship game.

North Carolina scored over 30 points nine times in 2015, topped the 40-point mark seven times and scored over 50 points in four games, which was a school record. Through 12 games under Littrell's guidance in 2015, UNC averaged 41.2 points a game, which at the time ranked 11th in the nation.

Under the leadership of Littrell, quarterback Marquise Williams set a new school record for career touchdowns (90) and total offense at North Carolina.

In his first season in Chapel Hill in 2014, Littrell helped Carolina establish several school records, including most passing yards, most passing touchdowns and most first downs. Williams was a second-team all-conference pick after leading the Tar Heels to a bowl game in his first year as the starter, and set several individual school records, including most rushing yards and rushing touchdowns by a quarterback. Carolina gained more than 5,000 yards in Littrell's first season as the play-caller and averaged 429.8 yards per contest.

Littrell came to Chapel Hill from Indiana where he guided one of the most prolific offenses in the country. Indiana finished ninth in the nation in total offense in 2013, averaging 508.5 yards per game. The Hoosiers were 17th in passing offense (306.7 avg.) and 30th in rushing offense (201.8). Indiana was one of only three teams to average more than 300 yards passing and 200 yards rushing

Bolser and wide receiver Cody Latimer were selected in the 2014 NFL Draft. Latimer was taken in the second round (56th overall) by the Denver Broncos, while Bolser went in the seventh round to Washington.

In Littrell's first season as Indiana's offensive coordinator in 2012, the Hoosiers led the Big Ten and ranked 17th nationally in passing offense (311.2). They finished second in the conference in total offense (442.0) and fourth in scoring offense (30.8).

Prior to his stint at Indiana, Littrell coached three seasons at Arizona, where his 2011 offense ranked third nationally in passing offense (370.8) and 15th in total offense (465.2).

Prior to Arizona, Littrell served four years as running backs coach at Texas Tech (2005-08) under Mike Leach. The 2008 Red Raiders rushed for 119 rushing yards per game, the highest total in the Leach era. Running back Shannon Woods earned All-Big 12 Conference honors in 2006 after averaging 6.1 yards per carry and snagging 75 receptions, totaling a top 15 national figure of 139 all-purpose yards per game.

Littrell began his coaching career as a graduate assistant at Kansas from 2002-04. The Jayhawks played in the 2003 Tangerine Bowl.

Littrell has coached in seven bowl games, played in two and was team captain on Oklahoma's 2000 national championship team. He was a four-year letterwinner at Oklahoma where he rushed for 231 yards and seven touchdowns in 1999 and finished his career with 11 rushing scores.

A lot of options for condensed formations. Lots of clips to watch and very informative