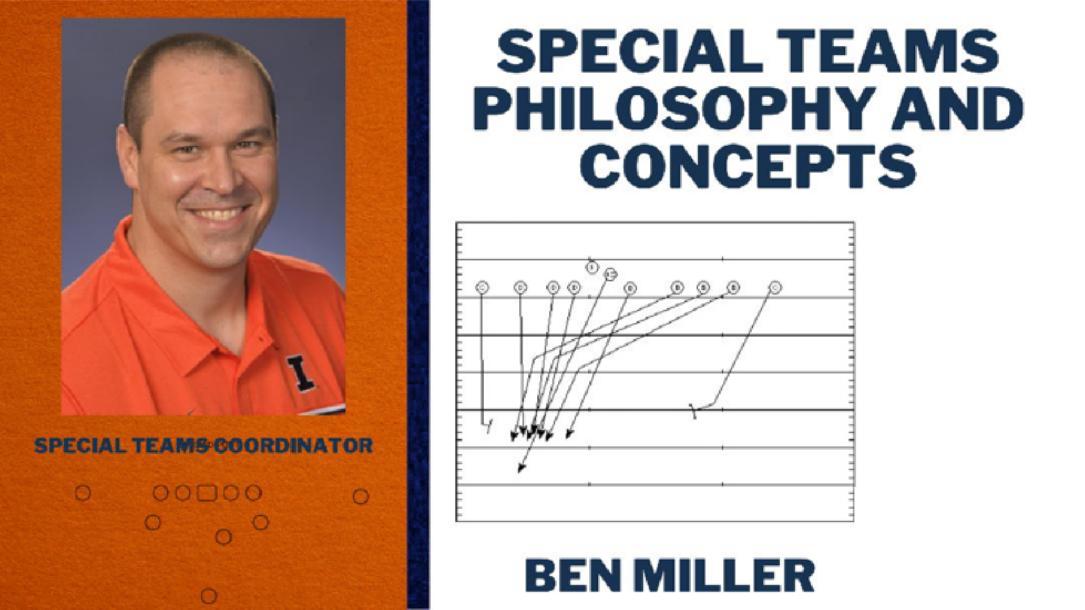 In this course, the Special team's coordinator Ben Miller discusses the philosophies and concepts he uses with his unit. He breaks down his Fast and violent strategy, focusing on players who are not thinking too much and only have one focus in mind, get the ball. The return game is simple, create space, by all means, give the returner the space he needs to take it home. The Coverage game is the opposite, condense the returning game. Collapse the space around the ball, giving them no place to go. Lastly, the ball is king. Lose the ball, lose the game, win the ball, win the game. Everything you need to create a monster special teams group is right here.

Simply click the ‘Book This Course’ button at the top right of this page, place your order, and you’ll immediately be logged into the training with full access. Take away coach Ben Miller's tips and tricks to developing a fast and violent special team today!

Ben Miller was named Illinois football’s special teams coordinator and tight ends coach in January 2021. Miller spent the previous 14 seasons as an assistant coach at Air Force. Miller coached one of the top special team's units in the nation and one of the best tight end duos in the Big Ten in 2021, helping Illinois to a 5-7 record and ranked wins over #7 Penn State and #20 Minnesota. Illinois' veteran special teams unit, led by All-Big Ten performers K James McCourt and P Blake Hayes, helped the Illini finish #1 in the nation in special teams, according to ESPN's SP+ rating. McCourt tied a program record with four 50+-yard field goals and two-time Big Ten Special Teams Player of the Week Hayes left Champaign with nearly every punting record in Illini history, including landing half of his punts inside the 20 for an Illini-record 34 punts inside the 20.

A 2002 Air Force Academy graduate, Miller spent the 2006 season as the offensive graduate assistant at Illinois under Ron Zook before returning to the Academy. He spent his first five seasons at Air Force coaching the tight ends, then nine seasons as the running backs coach. Miller also had 13 years coaching the Air Force specialists, including the last 10 as the special team's coordinator.