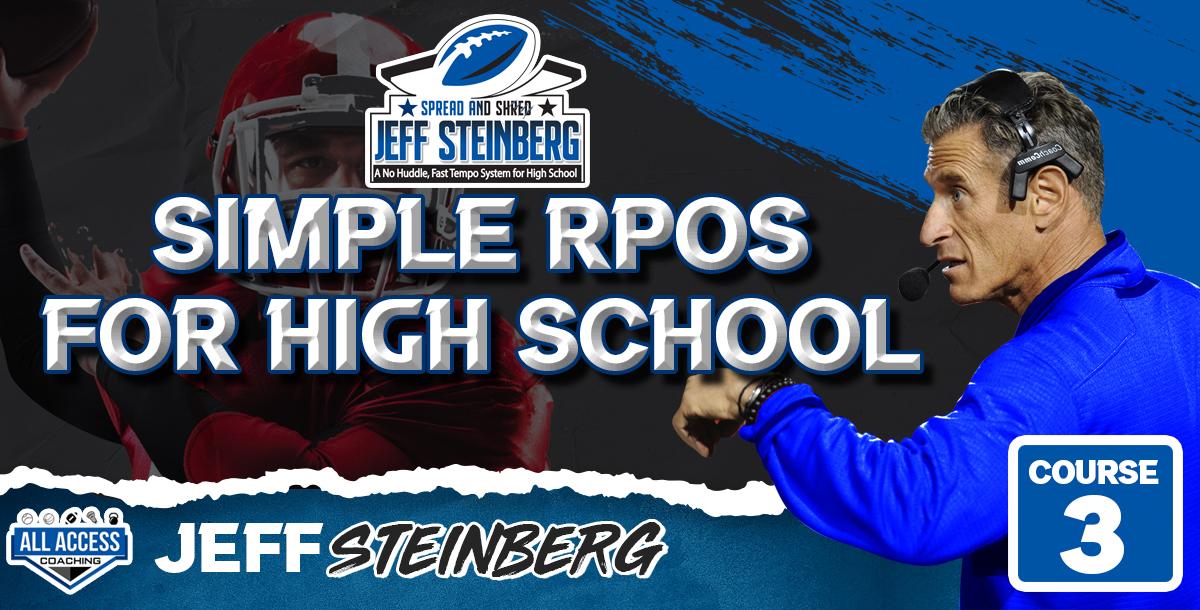 Want to Buy All of Steinberg's Courses at a Deep Discount?

The RPO Game explains how coaches can add a productive wrinkle to their team’s offense with RPOs. The video discusses why RPOs are useful. In addition, the video not only reviews different types of RPOs, it also explains how coaches can determine what kind of RPO is best for his team. In that regard, the video explores simple ways to use RPOs in your run game. Finally, the video addresses using RPOs in a team’s play-action passing attack, which many coaches believe is the next evolution of this innovative offensive concept.

• Different types of RPO’s
• Why are RPO’s useful?
• What kind of RPO is right for you?
• Box control
• Pre-snap RPO
• Post snap RPO
• Triple motion
• RPO’s as action-passes

At each of his schools Coach Steinberg implemented a hurry up no huddle spread offense that saw tremendous results.  Known for his organization & program building experience Jeff has been successful at 5 high schools in Southern California leading them to 18playoff appearances.  Additionally, Coach Steinberg’s teams have earned 8 league titles, 3 quarter final appearances, 4 semi-final appearances and 3 California Interscholastic Federation Championship appearances winning 2 titles.  Coach Steinberg has amassed 172 wins as a Head Football Coach. Throughout his career Jeff has developed record setting Quarterbacks in his programs who have gone on to all levels in NCAA in addition to NAIA schools.

Prior to coaching in California Jeff served as an assistant coach at the High School, Junior and U Sports level in Canada.

Wow, this video was explosive. Coach Steinberg really gives you a behind the scenes look of an extremely explosive offense. What looks so complex for the naked eye, coach explains step by step on how it is done. I had a couple of questions and Coach Steinberg answered them promptly. This is a must see. I really feel sorry for the teams I play this fall. It should be called "Shock and Awe". Thanks guys for not selling me junk...

The title says it all. Steinberg makes RPOs very simple to run. A Youth coach could easily run these concepts

Really enjoyed the breakdown, with the in depth looks in different fronts/boxes. Didn’t feel “robotic” like so of these can do. Really liked some of the terminology used. Absolutely can be implemented if you’re looking to start to create a portion or all of the foundation within an RPO system.