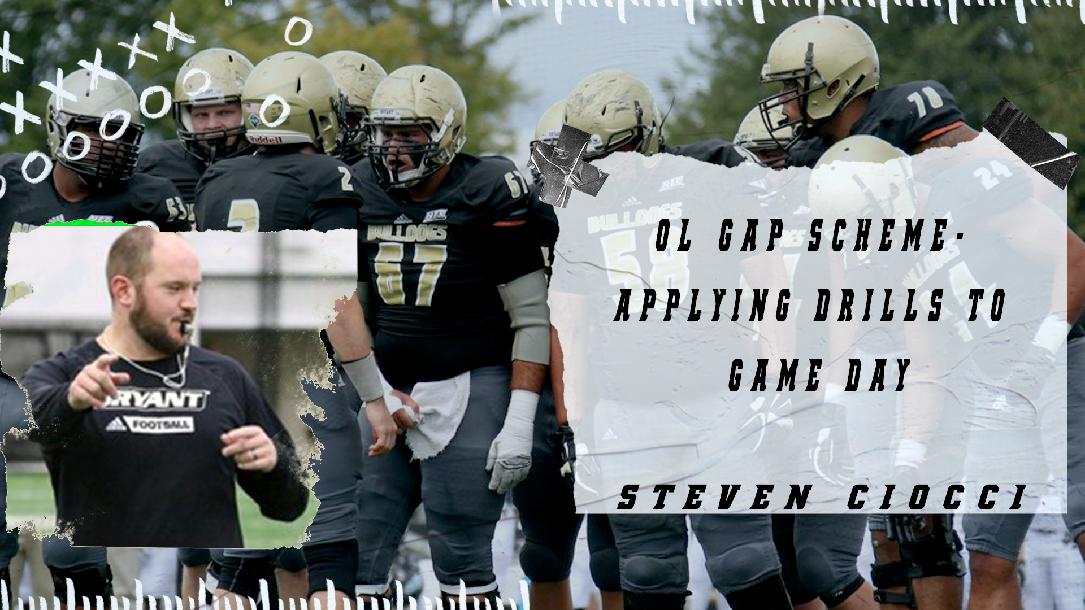 Coach Steven Ciocci runs you through the offensive line gap scheme he runs at Bryant College. Coach Ciocci goes deep into detail on a number of drills including the Gallop, Trigger Lead, Skip Pull, Open Pull and more. Coach then shows how each drill applies to his scheme by going over tape from Bryant. If you're looking to learn more about drills for teaching the Gap scheme, you won't find better drills anywhere else.

Ciocci is no stranger to the NEC, having played four years at Wagner College before serving two stints as an assistant coach with the Seahawks. During his playing days, Ciocci helped Wagner claim the 2012 NEC title and earn the league’s first victory in the FCS Playoffs. Ciocci was also on the staff that helped the Seahawks claim a share of the 2014 NEC title and then served as Wagner’s recruiting coordinator for two seasons.

“I am very excited to be back coaching in the NEC,” Ciocci said. “I am looking forward to working with the great administration at Bryant as well as a great head coach in Chris Merritt and the staff he is putting together. I am very excited about getting to work with the student-athletes at Bryant University.”

Ciocci comes to Smithfield after spending the 2018 season as the assistant offensive line coach (GA) at Florida International. He was part of a staff that led the Panthers to a program-record nine wins, including a victory in the Makers Wanted Bahamas Bowl. Four FIU offensive linemen earned All-CUSA honors while the group finished third nationally in sacks allowed (8) and fourth in TFLs allowed.

Ciocci’s coaching career began shortly after his playing career came to a close in December of 2012. He began his time at Wagner as an assistant offensive line coach before being promoted to tackles and tight end coach. Ciocci oversaw the development of Bryant Watts into an All-NEC First Team tight end.

As a player, Ciocci appeared in 43 games and made 35 starts at Wagner. He earned All-NEC First Team honors in 2012 after paving the way for a pair of All-NEC performers in the backfield. Ciocci was just as good off the field as he was on it, earning a spot on the NEC Academic Honor Roll three-straight years. He was also named the NEC Student-Athlete Advisory Committee (SAAC) Student-Athlete of the Year. In addition, Ciocci was named to the Allstate AFCA Good Works Team and to the FCS ADA Academic All-Star team.

Ciocci is a native of Royersford, Pennsylvania, and received his Bachelor of Science in Management in 2012 and his MBA in 2014 from Wagner.

Helped me with adding more specific drills that will help translate on gameday.