Tony Coaxum- Special Teams The Tip of the Spear 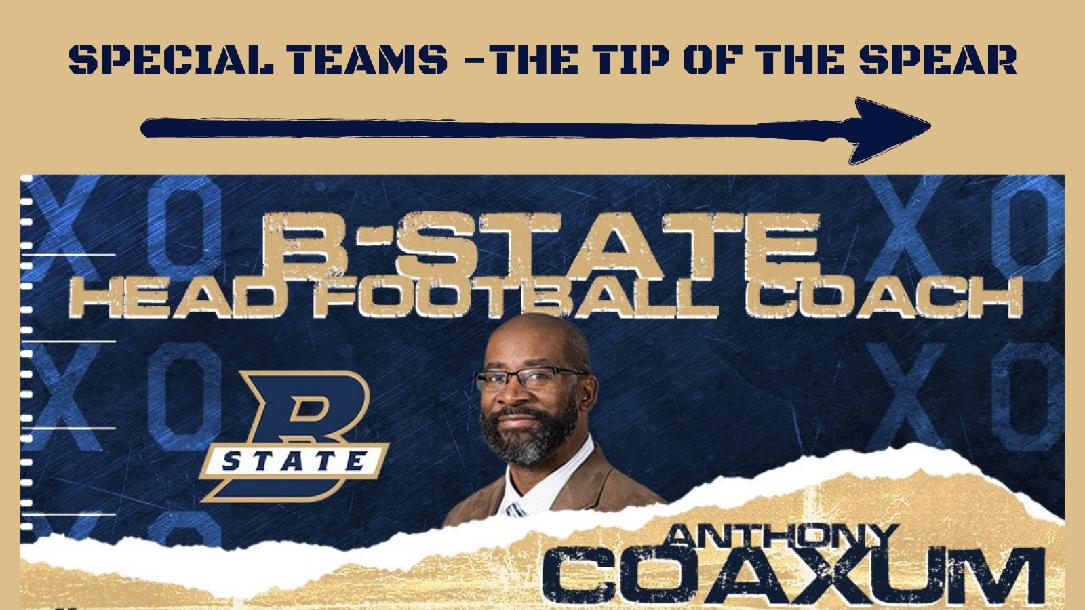 Head Coach Tony Coaxum goes into great detail about Special Team Philosophy's and Fundamental's that he has found to be successful.

Tony Coaxum was named the Head Coach of the Bluefield State Football program on October 9, 2020. Coaxum comes to BSC from the University of Northern Colorado where he was the Special Teams Coordinator and Defensive Backs Coach. Prior to Northern Colorado, Coach Coaxum served as a Senior Special Teams Analyst at Kansas under Les Miles. His other stops include one season at Central Michigan University as Special Teams Coordinator and Cornerbacks Coach (2018), Denver Broncos Assistant Special Teams Coordinator (2015-2017), Baltimore Ravens Special Teams Assistant (2014), and Army West Point Linebackers and Cornerbacks Coach (2007-14). Coaxum participated in the NFL's Bill Walsh Minority Fellowship Program with the New York Giants (2008) and the Tampa Bay Buccaneers (2012). Coaxum was a 3-year starter at cornerback for the Army Football team and ran track. He sits tied for 4th All-Time for Pass Breakups in a single season, tied for 10th All-Time for Pass Defended in a single season and tied for 14th All-Time in career Pass Breakups.

Teaching Your Skill Players The Fundamentals of Catching Punts (Give Your Returners The Tools To Change The Field Position) by Bobby Acosta
Views: 2226
FREE