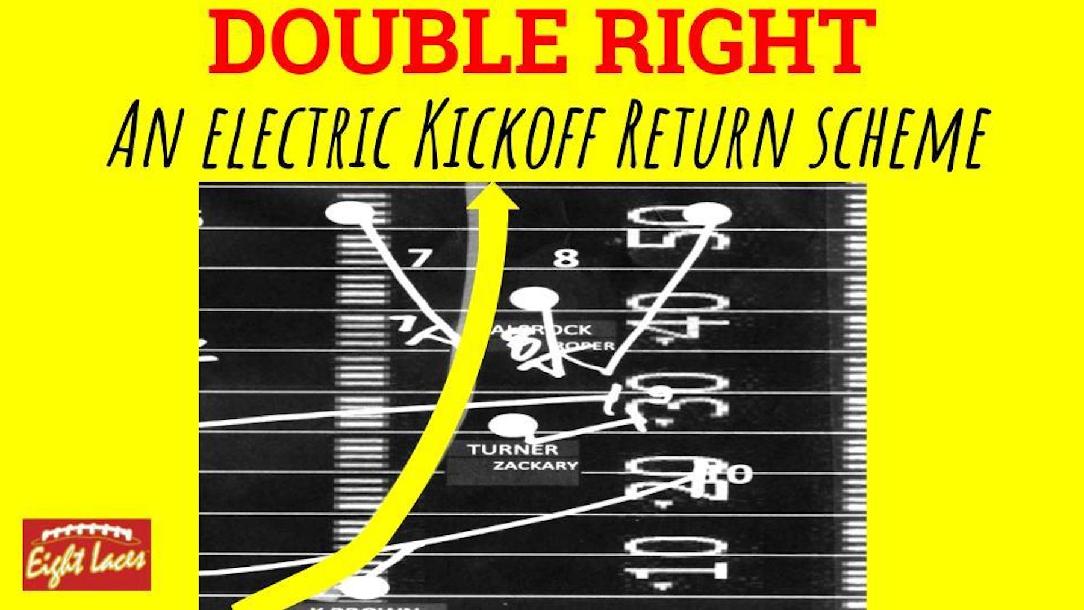 Fore shows it to you live in the first video, then walks you through it via "whiteboard" fashion (10 minutes).

The third video (almost 29 minutes long), and most important one of this series, walks you through two separate real game DOUBLE RIGHT Kickoff Returns so that you become an asbolute expert on this return scheme!

Your program needs to have a powerful return scheme that they build confidence off of.  DOUBLE RIIGHT is it!

The proof is in the pudding!

This was the best return scheme for Victor Valley Junior College in 2017, and you'll see why on this tape!  Coach Fore led the Rams to move from being ranked #20th in Kickoff Return among Southern Californian Junior Colleges all the way to #9 in his first year at the JC level.  The Rams finished #1 in their very tough conference for highest Kickoff Return average during conference play at 21.8 yard per return in 2017.

Fore uses his expertise as a veteran Special Teams Coordinator to help you understand how to package and put together a powerful Kickoff Return scheme.

No stone is unturned during this course!

Chris Fore is a veteran Athletic Director, Football Coach and Teacher from Southern California.  Fore was recently noticed for his prowess in the area of Special Teams by Hudl, as he was named to the 2017 Hudl Top 100 List for Special Teams.

Currently, he teaches Special Education at Sultana High School, and also serves as the Varsity Football Special Teams Coordinator. Fore also serves as an Adjunct Professor in the Department of Kinesiology program at Azusa Pacific University where he teaches Leadership and Administration of Athletic Programs in the graduate program.

Since August of 2016 Fore writes a weekly column called “Coaches Corner” for Max Preps, America’s #1 source for high school sports.  Coaches Choice published his first book: Building Championship Caliber Football Programs in 2013, and will publish his second book Shield Punt in 2017.  Fore’s third book, An Insider’s Guide To Scoring Your Next Coaching Job, gives readers a blueprint for securing a job in the field of athletics.

Fore owns Eight Laces Consulting.  He has also published several manuals that have helped coaches in building their programs, and navigate the job search process:  Outside The Lines Manual For Football Coaches,Outside The Lines Manual for Athletic Directors, and the Shield Punt E Clinic.  You can find each of these items at EightLaces.org.

Always a Great Resource for Special Teams Play, Coach Fore branches out from the Shield Punt game to expand our knowledge with a great KOR scheme. I love the Game Video breakdown and voice over of actual game footage.

Good scheme. The landmarks for each blocker are well thought out based on the typical landmarks for KO cover teams. I really like 2 double teams at the point of attack.