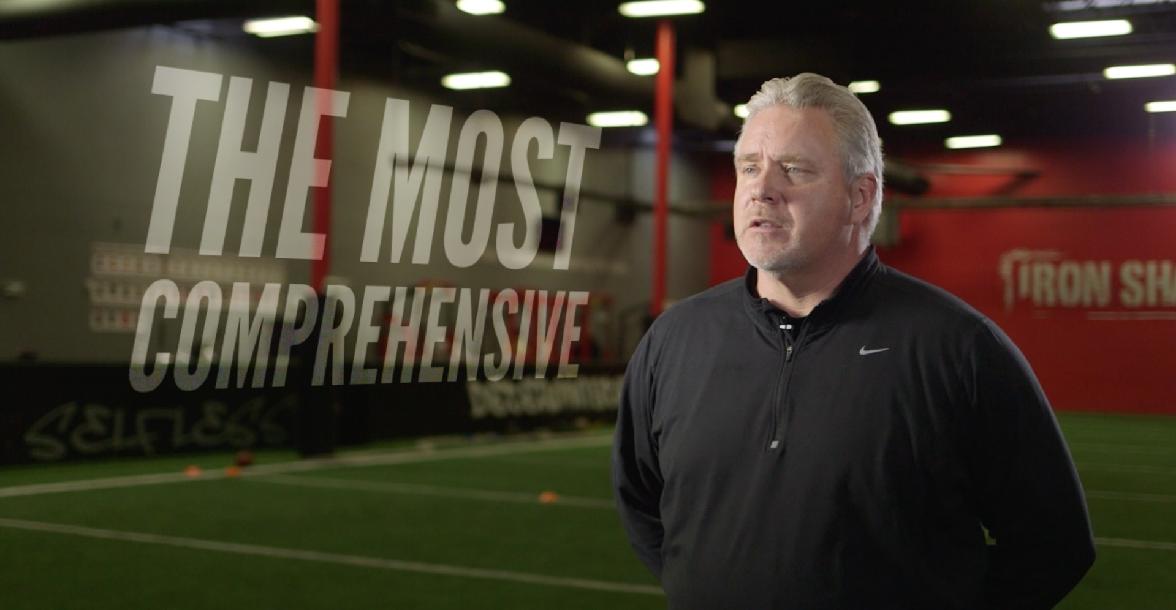 The Up Front Offensive Line Training System by Dave Christensen is the most comprehensive digital offensive line training course in all of Football. Dave Christensen is the former head coach at the University of Wyoming and currently at Arizona State University. This system complies the top training techniques from Christensen’s 33+ years of coaching at big time programs like Utah, Missouri, and Texas A&M and teaches the step-by-step fundamentals and technique that shaped dozens of top D1 and NFL draft picks.

Dave Christensen has taken these concepts that were completely unknown and unavailable below the collegiate level and provided them all in one place accessible on any device at any time! If you want to sustain, grow and even surpass your current successes, you need the right training to take you there.

In this course you’ll get:
• The training secrets of NFL First Round Draft Picks
• How to master the art of leverage, communication, and blocking in the run and pass game
• Keys to transform your entire offensive line
• The knowledge for players to outsmart every opponent
• D1 level drills
• Film examples with top college players
• 11 Chapters, 48 Episodes
• 3.5+ Hours of content

“Coach Christensen taught me techniques and drills I had never seen before. He was instrumental in helping me become a first round draft pick! If you’re willing to put in the work, you can’t go wrong with the Up Front Offensive Line Training System.”

Coach Christensen is the current Offensive Line coach at Arizona State University.  Before ASU Coach Christensen joined Texas A&M's staff in January 2015 to coach offensive line and oversee the running game. A veteran of 33 seasons as a collegiate coach, Christensen came to Texas A&M from the University of Utah, where he helped the Utes to a 9-4 record and a bowl win in his lone season in Salt Lake City. Previously, Christensen was the head coach at the University of Wyoming from 2009-13 and also a longtime offensive assistant under Gary Pinkel at Missouri and Toledo. Serving as Utah’s offensive coordinator and tight ends coach, Christensen helped the Utes to a four-win improvement while orchestrating a balanced offensive attack that averaged more than 190 rushing and passing yards per game. From 2009-13, Christensen was the head coach at Wyoming where he compiled a 27-35 record in five seasons. In 2009, Christensen became the first Cowboy head coach to win a bowl game in his debut season when he led Wyoming to a 35- 28 win over Fresno State in the New Mexico Bowl. Two years later, Christensen was named the 2011 Mountain West Coach of the Year after the Cowboys compiled an 8-5 overall record, including a 5-2 record against MWC opponents. He became a head coach after serving 17 years as an assistant for Pinkel at Toledo (1992-2000) and Missouri (2001-08). Christensen coached the offensive line at both schools and was the offensive coordinator from 1997-2008, including his entire stay at Missouri. Christensen devised and implemented one of college football’s most exciting no-huddle, spread offenses at Mizzou, where he was named the 2007 National Offensive Coordinator of the Year by Rivals.com and was runner-up for the 2007 Frank Broyles Award, honoring the nation’s top assistant coach. Missouri played in the Big 12 Championship game in both 2007 and 2008 as the champion of the Big 12 North. Missouri finished the 2007 season with a No. 4 Associated Press ranking and Christensen’s offense ranked No. 5 in the nation in total offense (490.3 yards per game), No. 8 in scoring offense (39.9) and No. 9 in passing offense (314.1). Missouri quarterback Chase Daniel finished fourth in the Heisman Trophy balloting in 2007, when Christensen’s offense scored a school-record 558 points, far surpassing the previous Missouri single-season record of 399 points. In 2008, the Tigers finished fourth in the nation in passing offense (330.4 yards per game), No. 6 in scoring offense (42.2) and No. 8 in total offense (484.1). The Tigers were nationally ranked offensively throughout Christensen’s tenure as the offensive coordinator, which followed a successful stint at Toledo. During his nine years as a Toledo assistant (the last four as the offensive coordinator), the Rockets set numerous school records on offense while winning one Mid-American Conference championship and two MAC West titles (tying for another). Christensen also served assistant coaching stints at Western Washington (1983), Eastern Washington (1986-87), Washington (1988-89, graduate assistant) and Idaho State (1990-91).

The course carries useful information. Its content is not quite revolutionary, but the course is thorough and provides some good ideas. I've slightly modified the Push the Car drill to use it to practice staying engaged throughout the play.