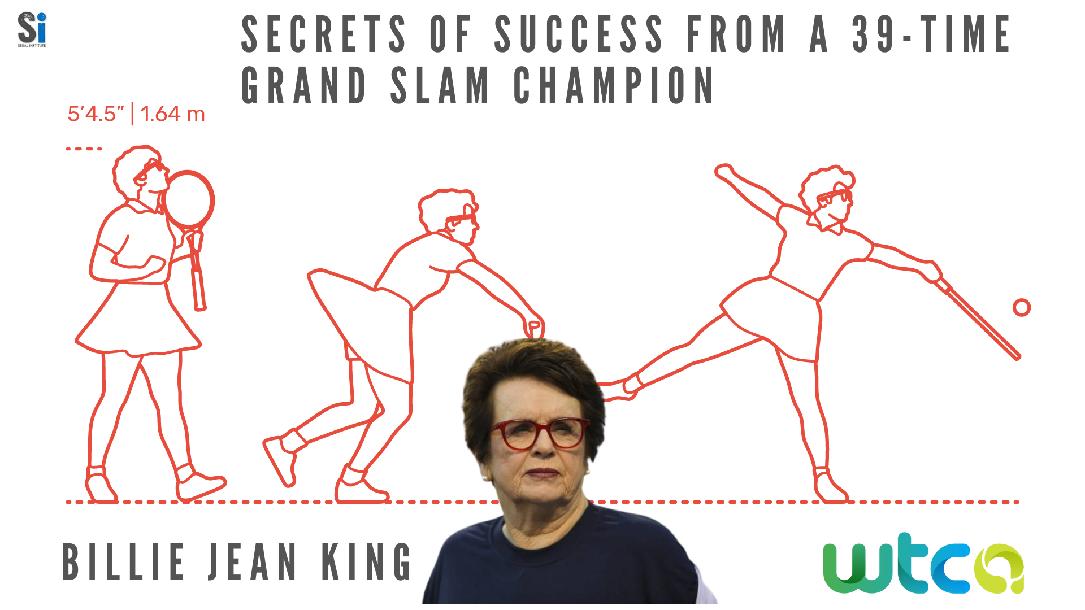 - The single most important skill when it comes to ball striking.. that nobody on TV is talking about.

- The secret to getting your players to hit their targets more consistently... while keeping their mind peaceful and calm.

Besides practical training secrets, Billie Jean King shares some of the key traits that seperates champions from "good" or "great" players.  The story she has about the WIlliams sisters "Mini Tennis" experiment, will open your eyes.

Success leaves clues.  And if you truly want to help your players maximize their abilities on court, Billie Jean King's "Secrets of Success from a 39-Time Grand Slam Champion" will certainly help you help them.

1 The Excellence and Importance of Billie Jean King 3:19 2 Introduction to Billy Jean King 1:21 3 4 Responsibilities as a Player 1:12 4 Struggles for Women in the Modern World 1:01 5 How can we Shift Stigmas in Sport and the Workplace 2:12 6 Importance of Fun and Encouragement in Training Young Women 3:47 7 Collective Help From People in Power 3:21 8 Learning Cues in Tennis 7:23 9 Coaching Women - Serena and Venus 2:42 10 Differences Between Coaching Men and Women 3:20 11 Helping Kids be Champions in Life 2:28 12 Pressure Involved in “That” Game 4:18 13 Making the Marketplace all Encompassing 6:36

Besides being a 39 time Grand Slam Champion, Billy Jean King spearheaded the movement for gender equality and has long been a pioneer for equality and social justice.

At 29, she won the "Battle of the Sexes" tennis match against the Bobby Riggs.

She also founded the WTA and the Women's Sports Federation.

She is widely considered one of the GOAT's in women's tennis, and has been inducted into the Tennis Hall of Fame.

In 2010 she was given the Fed Cup Award of Excellence and was one of the Time Persons of the Year in 1975.

She has also received the Presidential Medal of Freedom and the Sunday Times Sportswoman of the Year lifetime achievement award.

In 2018, she was honored with the BBC Sports Personality of the Year Lifetime Achievement Award.

NEW!
Magnus Norman - “As a coach you need to learn about communication” by The Tennis Talk
Views: 45
FREE