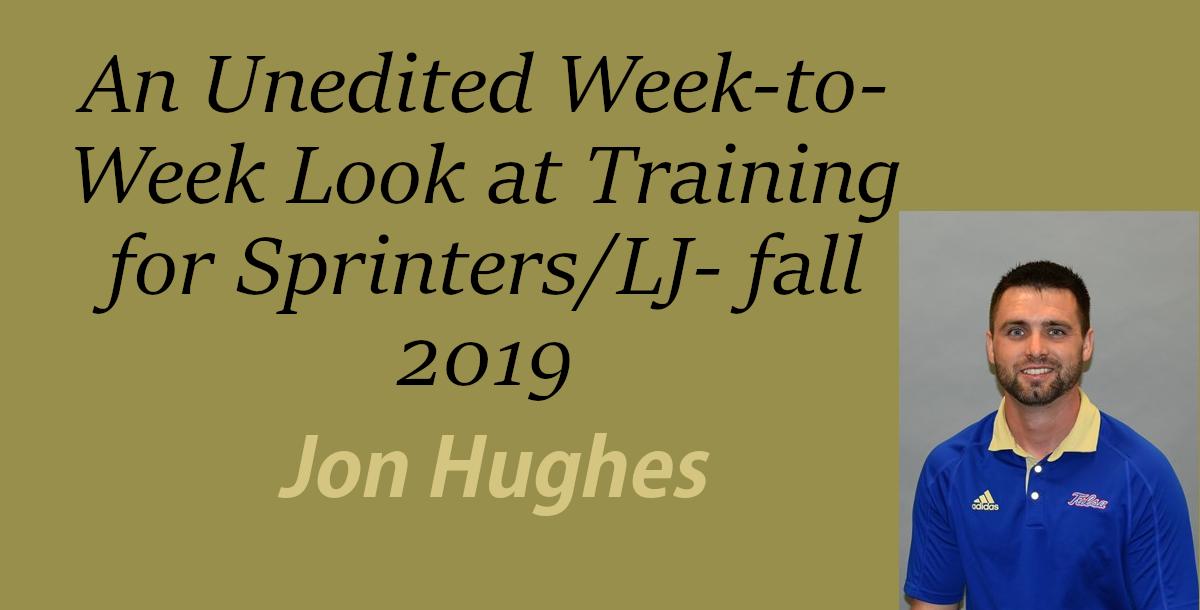 Coach Hughes gives us an in-depth breakdown of his training plan for the Sprinters and Long Jumpers at the University of Tulsa through the fall of 2019. Walks through each day of workouts for all of fall, the reasoning behind them, what mistakes were made, and what he will change for upcoming seasons.  Watching these lessons will give you an overview of what it looks like to plan your entire training cycle in advance as well as modifications you can make on days when "Plan A" workouts can't happen.

Jon Hughes began his time at Tulsa in January of 2017 as an assistant track and field coach. He is tasked with coaching the men’s and women’s sprints, hurdles, jumps, and multi-events.

In his first season, Hughes helped his athletes capture 13 Tulsa top-ten times, nine of them being top five including a school record in the women’s 4x1 relay.

Although the 2020 season was cut short, during the indoor season Jr. Carsyn Spurgeon set the long jump school record at her first meet of the season jumping 6.08m. She went on to break it again with a jump of 6.14 at the American Athletic Indoor Conference meet taking the gold medal.

The 2019 season brought more records. Six more Tulsa top-ten times were claimed including one school record. During Indoor season Sophomore Henry Visser claimed the number three time in Tulsa history in the 60mH with a time of 8.28.  Junior Carsyn Spurgeon had a breakout season in the long jump. At the Drake Relays she won gold with a wind aided jump of 21’ 1.25”.  She then leapt into the record books beating the old school record of 19’4.25” multiple times to finally set it at a wind legal 6.30m (20’8”) to win gold at the conference championship.  She went on to place 13th at the NCAA West Regional meet.  Senior Bailey Stewart bettered his number 2 spot on the Tulsa All Time list in the 400m taking his time down to a 46.89. Henry Visser continued his success outdoor, placing 3rd in the 400m hurdles at Conference, along with his freshman teammate Emmanuel Okwuone who placed 6th in the event.  The men’s 4x4 finished the conference meet with a 3rd place finish, the highest outdoor finish since joining The American Conference.

During the 2018 season, Hughes continued to guide his sprinters into the Tulsa record books with them claiming eight more Tulsa top-ten times, seven of them top five, including a school record in the men’s 400mH by Freshman Henry Visser.  At the conference level, Hughes coached sophomore Aaliyah Birmingham to a conference title in the 400m, Kiarra Reed to a third place finish in the 400 meter hurdles, and the women’s 4x400 meter relay to a third place finish for the second year in a row.

Before his time at Tulsa, he was a volunteer assistant coach for two and half years at Baylor University. While there he was tasked with helping assistant coach Jon Capron with the men's distance squad and intermediate hurdlers, and Coach Clyde Hart with the 400m runners. During the 2016 cross country season, Hughes helped Capron lead the men's team to one of its most successful seasons with a meet victory at the Ken Garland Invitational and a fifth-place finish at the NCAA South Central Region Championships - the program's best finish since 2010. Hughes helped guide freshman Devin Meyrer to All-Region honors with a 16th-place finish at the regional meet to earn the highest finish for a BU men's runner since 2006 and the first All-Region honor since 2013. On the track in 2016 during the outdoor season, Hughes helped three athletes (Robert Dutton, Kiana Hawn and Antwuan Musgrove) earn All-Big 12 honors in the 400-meter hurdles. Hawn went on to earn a spot in the NCAA Championships with the sixth fastest time in school history (57.48) at the Texas Relays and event titles at both the Ricardo Romo Invitational and the Michael Johnson Invitational. Indoors, Hughes aided in coaching the men's distance relay squad to All-Big 12 honors.

In his first year in Waco, Hughes aided Capron in coaching newcomers Hawn and Nick Ucherek to All-Big 12 performances in the 400-meter hurdles, while during the 2015 cross country season the men recorded a sixth-place showing at the regional meet.

While volunteering with the track and cross country teams, Hughes worked on a Master's in Sports Pedagogy from Baylor and taught undergraduate fitness classes in weight lifting and running. He is a certified strength and conditioning specialist by the National Strength and Condition Association. Hughes earned his bachelor's degree in Nutrition and Fitness from The University of Missouri in 2014. In college, he was a four-year member of the Tiger track and field and cross country teams. Hughes is a native of Center, Mo.