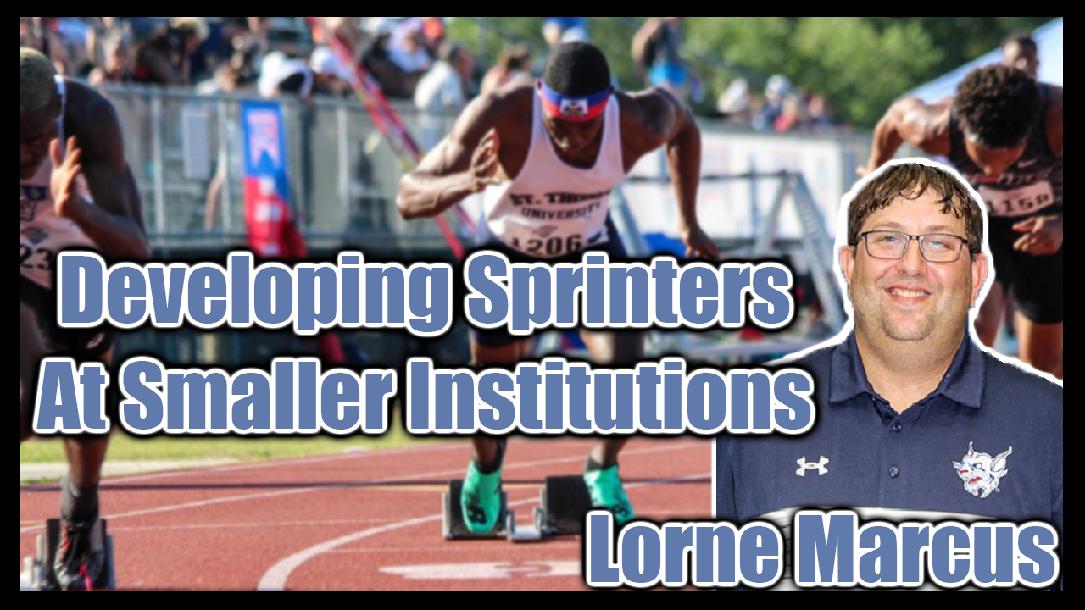 Lorne Marcus speaks on developing Sprinters at Smaller Institutions. Through this talk he will take any coach through a makeover. Learning your athletes in his eyes is the most important part of coaching. Being a good coach means adapting and overcoming. This course will help you to become an amazingly well connected and respected coach among your athletes. This is a must have to create culture and a cohesive team.

Lorne Marcus was promoted to Assistant Director of Athletics for Game Operations and SAAC on July 1, 2015 and has been a part of the track and field program for the past ten seasons.  In May of 2019, Marcus was officially named the Director of Cross Country/Track and Field.

Marcus started out with the Spartans as an Assistant Track Coach, dealing with the Sprinters and Jumpers. In his first two years, he had one of his sprinters finish 10th in the country and receive All-American honors. In 2012, Marcus was promoted to the head coach of both the indoor and outdoor teams.  Under the guidance of Coach Marcus, the Spartans won an East Coast Conference Outdoor Men's Track Championship in 2013, 2017, 2018, 2019 and has won the East Coast Conference Men's Indoor  Championship in 2018.  Lorne Marcus has been named the ECC Outdoor Men's Track Coach of the year in 2013, 2017, 2018 and 2019 and also received the ECC Indoor Coach of the Year Award in 2018.

In Coach Marcus' tenure the Spartans have earned many accolades including; over 100 All-Conference members, 25 All-Region selections, 10 athletes ranked in the top 25 in the Nation in their event, as well as having 3 All-Americans. Coach Marcus has also had three Conference Runners of the Year; George Erazo, Winslow Dorsainvil and St. Jacob Diodonet.  St. Jacob Diodonet has also been named the ECC Indoor Athlete of the Year for four straight seasons.  He is only the second individual to hae ever accomplished that in the conference history in any sport.

Marcus, on the academic side of the ledger, has had his Women's Track athletes named to the USTFCCCA All-Academic Team in every season since the 2011-2012 year. The Men have also received the award twice. In addition, athlete Chris Muniz was recognized for an individual All-Academic award by the USTFCCCA for qualifying for the National Event and having over a 3.2 Grade Point Average.  St Jacob Diodonet also will be awarded this honor of getting academic All American in that he ended his college career with a 3.28 GPA.

Marcus was recently named to the NCAA Division II Track and Field Cross Country Committee, representing the East Region for the NCAA. Coach Marcus, was promoted this fall to Secretary of the Executive Committee for Division II Track & Field within the USTFCCA. He has served on the committee for the past five years as the East Coast Conference Representative for the sport.

In addition to all of his administrative and coaching duties at STAC, Lorne Marcus has been an adjunct professor at St. Thomas Aquinas College for the past eight years, teaching in the Sports Management Program and the Criminal Justice Extension Program for the College at United States Military Academy at West Point. Marcus also teaches within the county at nearby Dominican College and Rockland Community College.
Before arriving at St. Thomas Aquinas College, Marcus worked in the legal field in Florida before returning to his native New York. Marcus has a Juris Doctorate in Law and an M.S. in Sports Administration from St. Thomas University in Miami Gardens, Florida. Prior to his time in the Sunshine State, Marcus participated in one year of football and four years of Track & Field at SUNY Cortland, where he graduated with a B.A. in Political Science.