How to Bring the Best Out of the Sprinter Athlete 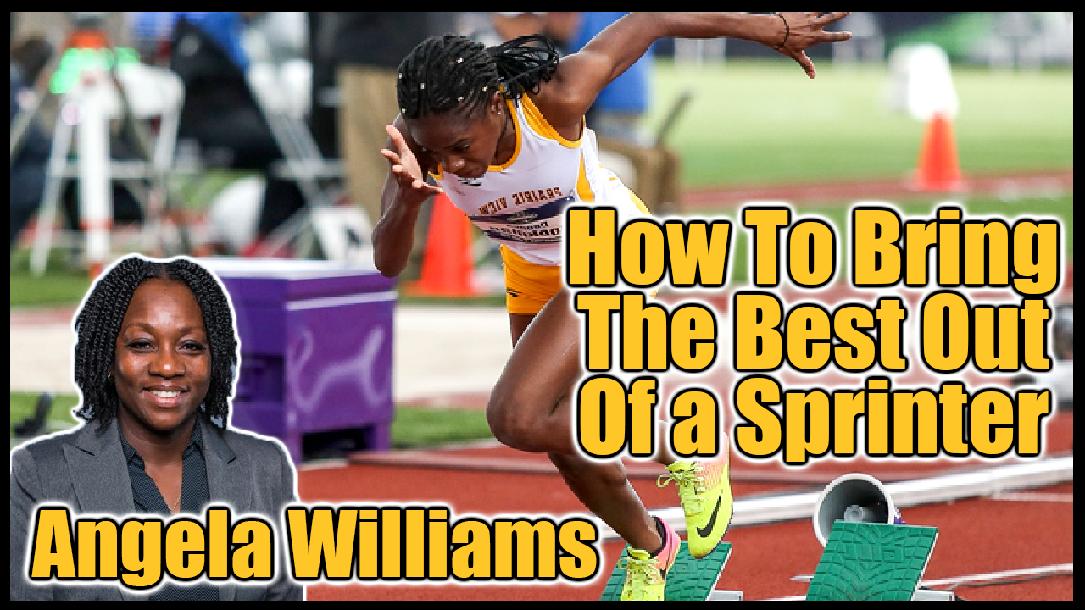 Angela Williams talks about how to get the most out of sprinter from the perspective of the athlete.

1 Introduction 1:37 2 Evaluating High School Sprinters 10:24 3 My Successful Athletes High School Stats 4:22 4 My High School Athletes Improvements in College 12:14 5 Set Achievable Goals for Your Athletes 2:32
Questions and Answers
6 What Do You Look for in Recruiting 3:28 7 What Would You Like to See From High School Coaches as They Are Developing Track and Field Athletes 2:01 8 What Are Some Learning Resources You Would Recommend for Coaches 3:24 9 Does Having a Good Relationship With Your Athlete Help You 3:24 10 How are You Helping Your Athletes to Stay Engaged in School and Athletics 1:56 11 How do You Discuss Bodyweight with Your Female Athletes 4:59 12 Do you track your Athletes Menstrual Cycles and How does it Affect Training 0:57 13 What Does a Recovery Week Look Like in Your 4 Week Cycle 2:31 14 PowerPoint Slides: How to Bring the Best Out of the Sprinter Athlete

Angela Williams began her college track career at the University of Southern California, graduating in 2002. She won the Honda Sports Award as the nation's best female track and field competitor in 2002, which qualified her as a nominee for the Honda-Broderick Cup, awarded to the best overall female collegiate athlete in 12 sports. She was named the winner of that award also in 2002. Starting for the American national team in 2001, she won a silver medal in the 60 metres competition at the 2001 IAAF World Indoor Championships. She later repeated the event at the 2003 Indoor Championships, but was upgraded to gold winner after Zhanna Block was disqualified for doping. At the 2003 World Championships in Athletics she won silver in the 4 x 100 m relay, along with teammates Chryste Gaines, Inger Miller, and Torri Edwards. Williams also competed in the 4 x 100 metres relay at the 2004 Summer Olympics, with the American team easily winning in the first heat but not being able to finish in the final. In 2002, Angela Williams became the first person to win four consecutive individual NCAA titles in the 100m. In 1999, she won in 11.04 at the age of 19. In 2000, she clocked 11.12, 11.05w in 2001 and 11.29 in 2002. Williams represented the United States at the 2008 Summer Olympics in Beijing. She competed at the 4x100 metres relay together with Mechelle Lewis, Torri Edwards and Lauryn Williams. In their first round heat they were disqualified and eliminated from the final.

Acceleration & Agility: One Workout to Build Both by Christian Korfist
Views: 3580
(1) $15

West London Track & Field: Why, How and What We Do by Laura Turner-Alleyne
Views: 482
FREE