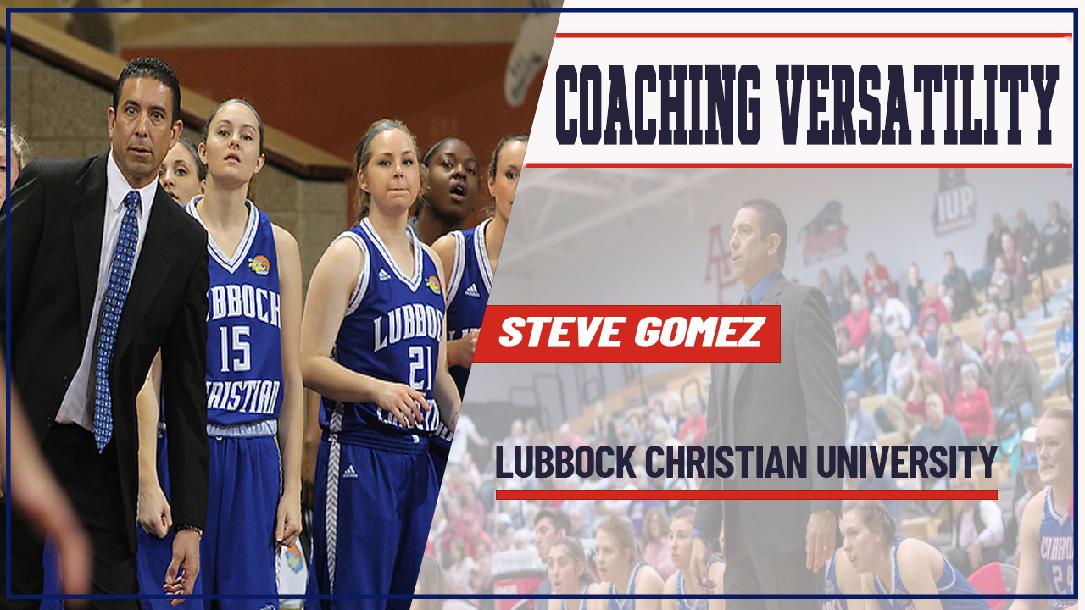 As the game of basketball is evolving, we as coaches need to expand our knowledge and adapt our strategies to the modern trends. It is not enough to keep using the same tactics and style of play that we were taught back in a days. Coaches get stuck in playing old slower tempo style of play and the inability to adapt can cost you lost games. The game is now faster, players are more versitile and we as coaches can take advantage of it and utilize their talent to the maximal potential while being more productive and efficient team.

USA Women's Basketball U17 National Team Assistant Coach and Lubbock Christian University Head Coach Steve Gomez breaks down every part of the offense that can help you to become better and more versitile coach.

How To Awaken The Beast Within Your Players

Sideline and Baseile Out of Bounds Tactics

Lubbock Christian University (Texas) head coach Steve Gomez helped lead the USA to a 7-0 record and a gold medal as an assistant coach for the 2018 USA Basketball Women’s U17 World Cup Team that played in the 2018 FIBA U17 World Cup this past summer in Belarus.

In 2017-18, Gomez guided his quad to an incredible 31-2 record, which tied for the second-highest win total in program history. LCU captured a South Central Region Tournament title and reached the quarterfinals of the NCAA Division II Elite Eight Tournament. Gomez was named the 2018 Heartland Conference Coach of the Year and the 2018 WBCA South Central Region Coach of the Year, and, LCU currently is riding a 50-game winning streak in its home arena.

LCU went a remarkable 25-1 overall in 2013-14 in its first DII campaign and completed conference play with a perfect 20-0 mark for the first perfect conference record in program history.

In his final two years as an NAIA program, Gomez set consecutive single-season win records with a 28-6 finish in 2011-12 and 31-4 in 2012-13.
The 2012-13 team won its first Sooner Athletic Conference Tournament title en route to a trip to the NAIA National Championship tournament.

The 2011-12 squad claimed the program’s second SAC regular season crown as co-champions and made its second appearance in the semifinals of the NAIA National Championship Tournament.

In 2009-10, the Lady Chaps finished 27-7 with a trip to the NAIA Sweet 16.  During that season, Gomez became the all-time women's basketball wins leader at LCU.

In 2006-07, Lubbock Christian never left the top-10 in the NAIA National Poll and set a school mark for wins in a season with 26, eclipsing the school mark of 23 they set the prior season. In addition, LCU made its fourth-consecutive trip to the NAIA National Tournament, finishing in the Sweet 16.

Gomez and his team finished 23-12 in 2005-06, and made an unparalleled run at the NAIA National Tournament. LCU beat four of the top six teams in the nation and became the lowest seed ever to reach either the NAIA Fab Four or the NAIA National Championship, and Gomez was named the SAC Coach of the Year.

In his first season in 2003-04, Lubbock Christian went 16-14 and earned an at-large bid into the NAIA National Tournament, which the program followed up in 2004-05 with another NAIA Tournament appearance.

An LCU graduate, Gomez was a standout perimeter player for coach John Copeland in the late 1980s, and to this day, he holds the school record for career free throw percentage at 85.5 percent.

He graduated in 1988 with a bachelor’s degree in mathematics and used his degree to teach in the classroom while pursuing coaching on the sidelines.

Gomez's career began at Lubbock Monterey High School where he served as an assistant coach in the men's basketball program from 1988 to 1995.

In 1996, Gomez accepted the men's basketball head coaching position at Lubbock Cooper High School, where he remained until returning to Lubbock Christian University to take over the women’s basketball team 2003. During his seven seasons at Cooper, the team made the playoffs four times, earned the school's first state ranking and capturing the program’s only district championship in Gomez's final season.

As the game of basketball is evolving, we as coaches need to expand our knowledge and adapt our strategies to the modern trends. It is not enough to keep using the same tactics and style of play that we were taught back in a days. Coaches get stuck in playing old slower tempo style of play and the inability to adapt can cost you lost games. The game is now faster, players are more versitile and...